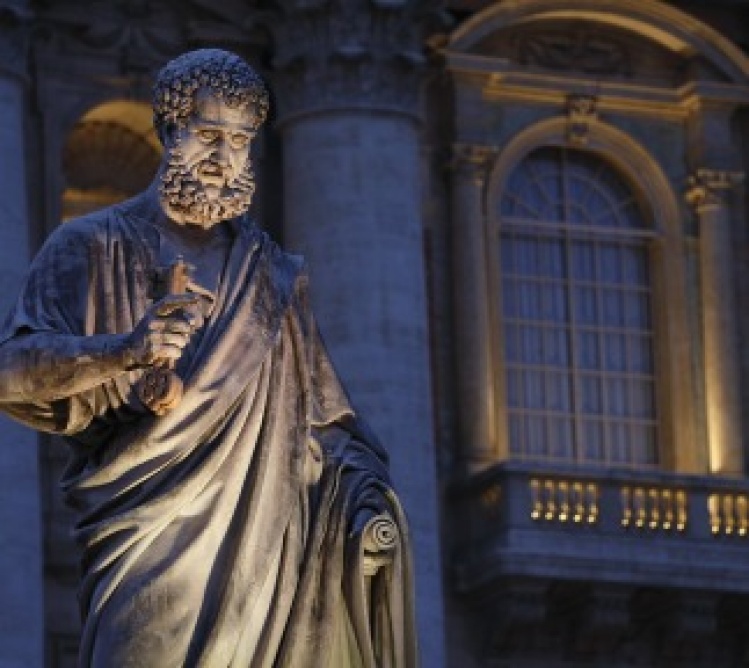 It's been a long time since I have read a book about the church that made me laugh out loud. In The Vatican Diaries, John Thavis presents many stories that will make you laugh or cry. Few people know the Vatican as well as Thavis. For more than twenty years, he covered the Vatican as the Rome bureau chief of Catholic News Service. Over the years he developed inside sources and expertise—he even took courses in Latin so he could read Vatican documents before they were translated.

The most amusing parts of the book deal with journalists trying to cover the Vatican, especially while traveling with the pope. Riding in the pope’s plane is a highly sought and expensive privilege, but not one that makes covering him easy. Often those who fly with the pope see less of him than those who stay in the press room and watch on television. Vatican handlers, crowds, and security procedures challenge even the most resourceful reporters.

Among many tales, Thavis provides the inside dope behind the smoke that was supposed to announce the election of Pope Benedict XVI. By tradition, the papal ballots are burned after every round of voting. White smoke means we have a pope. Dark smoke means we don’t. In 2005, however, the stove used for burning the ballots had a new design; it hadn’t been tested. The smoke that appeared after Benedict was elected was neither dark nor white. There was, however, a backup plan: once a pope had been elected: St. Peter’s largest bell would ring. But the man responsible for ringing that bell wouldn’t do so until he got word through proper channels. He refused to accept the word of a Swiss Guard. Confusion over the signal appears to be a Vatican tradition. Thavis relates that earlier in his career he saw a newspaper editor use Wite-Out to lighten the smoke in a photograph before publication.

Thavis’s stories are not only funny but informative. For example, he tells how a journalist on the airplane heading to Brazil asked Pope Benedict whether he agreed with the Mexican bishops’ excommunication of politicians who voted to decriminalize abortion. “Yes, this excommunication was not something arbitrary but is foreseen by the Code of Canon Law,” the pope replied. “It is simply part of church law that the killing of an innocent baby is incompatible with being in communion with the Body of Christ. Thus, the bishops didn’t do anything new, anything surprising or arbitrary.” Even though Benedict spoke for another twenty minutes, reporters “had heard two magic words: ‘abortion’ and ‘excommunication,’” Thavis writes. Before long, the story hit the news wires because reporters can now file stories from the air.

Vatican spokesman Federico Lombardi, SJ, was soon spinning the pope’s response because the facts presented in the reporter’s question were wrong. The Mexican bishops had not excommunicated anyone, he pointed out. In trying to be supportive of the Mexican bishops, the pope had “waded straight into the swamp,” Thavis writes. Lombardi had little luck correcting the coverage. “I’m not going to use that,” one U.S. reporter explained. “It ruins the story.” Experienced reporters like Thavis knew that canon law stipulates excommunication for those directly involved in an abortion, not for legislators who helped make it possible. Still, journalists were wondering how Pope Benedict could say what he did because, as former head of the Congregation for the Doctrine of the Faith, he would know that “the Vatican’s own legal experts would consider automatic excommunication of proabortion politicians a misapplication—an abuse—of canon law,” according to Thavis.

Eventually, Lombardi offered more clarification: The pope was not saying proabortion politicians were excommunicated, but that they should exclude themselves from Communion. It was not until Lombardi said that he was “authorized” to make that clarification that the skeptical reporters began sending revised stories to their editors. “Authorized” is Vatican code for “it came from the pope.” When the official Vatican transcript of the press conference was published, the pope’s words were changed. Still, as Thavis notes, a question remained: How “this pope, reputedly the sharpest mind in the Vatican, could fumble so badly on an issue he had followed so closely.”

In another behind-the-scenes account, Thavis reminds readers of Benedict’s first homily after being elected pope. The sermon surprised journalists, not because it was in Latin, but because it stressed the importance of Vatican II as a “compass” for his papacy. He expressed the desire for “open and sincere dialogue” with everyone. He talked of ecumenism and the church’s efforts to promote justice and peace. That was not a typical Ratzinger talk, and it was seen as an indication that he saw the job of pope as quite different from that of being prefect of the Congregation for the Doctrine of the Faith. The media announced that the inquisitor had become a pastor.

Some time later, Thavis asked the Vatican Latinist Reginald Foster about the sermon. Foster guffawed. “Are you kidding? That was just a canned thing. We wrote it a week before the conclave!” Foster continued: “They needed something to hand the new pope, something all-purpose, got it? We had him say something about everything. It was generic: Vatican II was great, a bit about war and peace, something nice about young people, ecumenism, the whole bag.” Thavis reread the homily in this light and concluded “it was Vatican boilerplate—surprisingly well-assembled boilerplate, though.”

Of course, there are also chapters dealing with the dark side of the church. Thavis examines the inability of the Vatican to deal with the sexual abuse committed by the late Marcial Maciel Degollado—founder of the Legionaries of Christ—until almost the end of his career. Thavis also chronicles the on-again-off-again courting of the schismatic Society of St. Pius X. Another chapter deals with the Vatican’s attitude toward sex.

In the final chapter, Thavis returns to the difficulty reporters have had covering Pope Benedict. “The consensus view was that the pope’s media problem was that he hadn’t defined himself, a failure that handicapped reporters tremendously. To sell the pope as a story, he had to have a persona—good or bad, but something with global impact. From the day of his election, the media had been searching for a Benedict persona, but nothing stuck.” Reporters moved from “Benedict the Gentle,” with his supposed love of cats, birds, and other animals, to “Benedict the Bold,” who was going to undo the liturgical changes of Vatican II. Then for a brief period it was “Benedict the Green,” because solar panels were installed on the Vatican’s audience hall. And while Benedict saw himself as a teacher, reporters found this a hard sell with editors, especially when he avoided topical issues. As a result, Benedict was more apt to make the news when there were blunders, such as the negative reference to Islam in his Regensburg address, or his reference to excommunication on the plane to Brazil. And many of the gaffes reported in the media were not committed by Benedict but by underlings who were thought to speak for the pope.

As much as I liked The Vatican Diaries, I want Thavis to write another—one in which he draws on his expertise to tell us how to reform the Roman curia. In the meantime, however, this book can be read and enjoyed by anyone interested in what really happens in Rome.