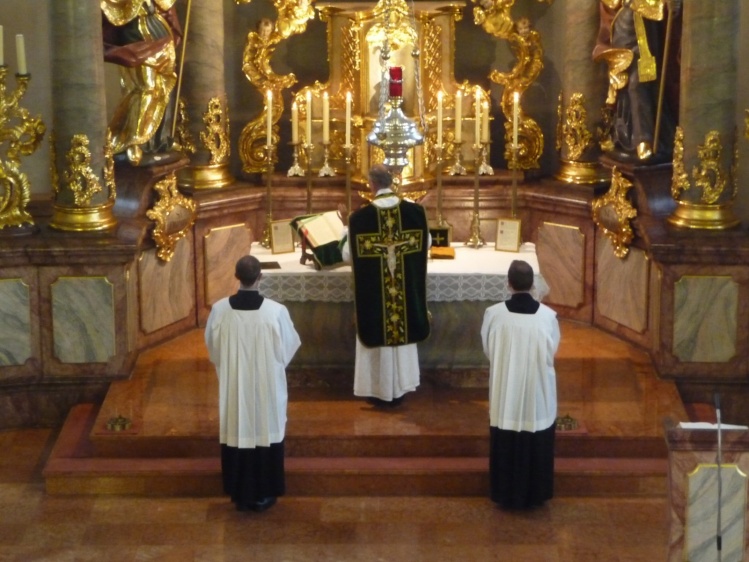 The estrangement between academic theology and the institutional Church is one reason many younger Catholics are now turning to neo-traditionalist circles for instruction. A new generation is re-examining what’s happened in the church since the 1960s and reacting against the theology that came out of the Second Vatican Council. Some younger Catholics are also questioning the legitimacy of the secular, pluralistic state. This is why the concerns of academic theology are no longer merely academic.

Those who have contact with young Catholics—for example, college students—may have noticed that this theological anti-liberalism is not just coming from a few marginal intellectuals. Catholic anti-liberalism is part of a broader phenomenon, a new quest for Catholic identity that takes various forms. It may be expressed as an enthusiasm for the Tridentine Mass and a distaste for the Novus ordo. Or it may take the form of an interest in countercultural communities—in some version of the “Benedict Option.” But it can also take the form of a theo-political imagination that rejects liberal democracy in favor of a new Christendom. Mixed in with this ideal is often a suspicion of those who come from parts of the world where Christianity is not the predominant religion.

The present wave of anti-liberalism does tell us something about what’s happened to liberal Catholic theology and religious-studies departments in the past few years. As a faculty member in the theology and religious-studies department at Villanova University, I found what Archbishop Charles Chaput had to say after his lecture here significant. Someone asked him about the role of John Paul II’s apostolic constitution Ex Corde Ecclesiae (1990) in Catholic universities today. He answered that the document, issued by the U.S. bishops in 1999 to implement Ex Corde, “had no teeth.” This was as frank an acknowledgement of the estrangement between Catholic theologians and the church as one could ask for.

What happened in the years between the Land O’Lakes Statement (1967) and the implementation of Ex Corde Ecclesiae emancipated theology from ecclesiastical control, but it also emancipated the Catholic Church from academic theology. There was a breakdown between bishops and theologians throughout the late 1970s and early 1980s having to do with the theology of sexuality. In 1979 a letter from the Congregation for the Doctrine of the Faith criticized Human Sexuality: New Directions in American Catholic Thought, a study commissioned by the Catholic Theological Society of America and edited by Anthony Kosnik. Bernard Law, who was appointed archbishop of Boston in 1984, publicly criticized Cardinal Joseph Bernardin’s Common Ground initiative, which was an effort to build bridges between different elements of the U.S. church, including academic theologians. Then there was the controversy about the new Catechism between the mid-1980s and 1992. Many theologians feared the reduction of their critical academic work to catechesis; some also worried that the Catechism was nullifying the teachings of Vatican II “by forcing them into a conservative mold.” All these developments led to more separation between academic theology and the hierarchy. Today, few Catholic theologians who work in academia also advise their local bishop or help the bishops’ conference draft its statements.

Catholic scholars of literature, art, history, etc., could teach a kind of Catholic studies that focused on the high cultural ideals of the Christian West and largely ignored or rejected post-conciliar theology.
sharetweet

The work of Catholic theologians became less and less important to many Catholic leaders (bishops, public intellectuals, big donors), who instead turned their attention to initiatives that addressed the “culture wars.” But even apart from ideology, there was a real turn away from contemporary Catholic theology toward Catholic culture. This means that many Catholic students in America learned about Catholicism not from theology professors, but from Catholic professors of literature, the arts, history, and politics. Such students likely do not appreciate the importance and coherence of theological thinking as such. The influence of the Catholic intellectual tradition on all the disciplines, not just theology, was one of the themes of Ex Corde Ecclesiae. But to many, this meant that one could get a Catholic education without studying much—or indeed any—current Catholic theology. Because of the left-right split that widened during the pontificate of John Paul II, many Catholics, including intellectuals and even academics, wrote theology off as a discipline corrupted by “liberal opinion.” Catholic scholars of literature, art, history, etc., could teach a kind of Catholic studies that focused on the high cultural ideals of the Christian West and largely ignored or rejected post-conciliar theology.

As a consequence, some of the most prominent young commentators on current Catholic affairs have little formal theological formation, though they may know a lot about other elements of the Catholic intellectual tradition. And in a perverse reversal of fortunes, at the very moment many Catholic colleges and universities were freed from episcopal interference, they happily surrendered to the influence of corporate donors, who were eager to fund conservative projects on Catholic campuses—projects that often combined theological traditionalism with neo-liberal or libertarian economic ideology.

This phenomenon should be a wake-up call for Catholic theologians in America, because in the long run it will threaten the intellectual vitality, if not the very survival, of academic theology at Catholic colleges and universities. There are at least two problems that theologians and religious-studies scholars teaching in a Catholic university have to face in light of the present Catholic moment.

The first problem is about the canon. Is there a canon of theology on Catholic campuses in America, or do we now have so many canons that the very idea of a canon has been lost? In light of the fact that Catholic theology in America is being displaced by other voices claiming to represent Catholic culture, should theologians have a clearer sense of what theology at a Catholic university ought to include? The tradition-minded students and professors who reject or just ignore post-conciliar theology certainly have some kind of well-defined canon, defined in part by its rejection of Vatican II and post–Vatican II theology. But I am not sure that post–Vatican II theologians themselves have a real canon. Their syllabuses are usually a compromise between what they are willing to teach (because it is part of their research projects) and what students are willing to take (the credibility of theology departments depends partly on their ability to get a sufficient number of students to major or minor in theology). Too many theology departments try to remain “relevant” by offering courses that I fear will make theology less relevant in the long run. The anxiety for relevance means that Catholic theology is now often reduced to Catholic social teaching. At the same time, the growing irrelevance of academic theology is due to the fact that for a long time aggiornamento Catholic theologians thought that aggiornamento theology did not need to be defended because it was self-evident. The result is that today many conservative Catholic students instead major in “Catholic Studies,” while many progressive Catholic students major in justice-and-peace studies.

The second problem is of what I would call a lack of ecclesial commitment—that is, a lack of awareness that the Catholic academic complex has its place also within the Church, even if its integrity requires a certain intellectual independence. They need the church as much as the church needs them. Today, most members of the hierarchy have not done their studies in a secular university, and lay theologians seldom have the same kind of theological training their bishops have; not surprisingly, they feel alienated from one another. But the institutional church has a resilience to the vicissitudes of history that Catholic academia on its own probably does not. For example, the institutional church can ignore market forces in a way that academia cannot. Reintegrating academic theology with the rest of the church is made complicated by the choice—a very good one, which should not be reversed—to make departments of theology and religious studies on Catholic campuses more diverse by hiring non-Catholic professors. But ecclesial commitment in the sense I have in mind is not only about church membership. At a minimum, theologians and religious studies professors should be more aware of their duty to respond to questions that traditionalist or conservative Catholic students have and for which they often find no answer in liberal-progressive theology departments. More generally, theologians and religious-studies professors teaching on Catholic campuses ignore at their own peril the big shifts happening in church politics and in the relations between the institutional Church and Catholic higher education. I believe that liberal Catholic theologians have to offer an alternative to the current neo-traditionalist vision of the Catholic tradition. But if we want to do that, we’ll need to take into account the ecclesial dimension of what we do. The idea that Catholic academic theology can thrive or even survive independently from what happens in and to the church is an illusion.