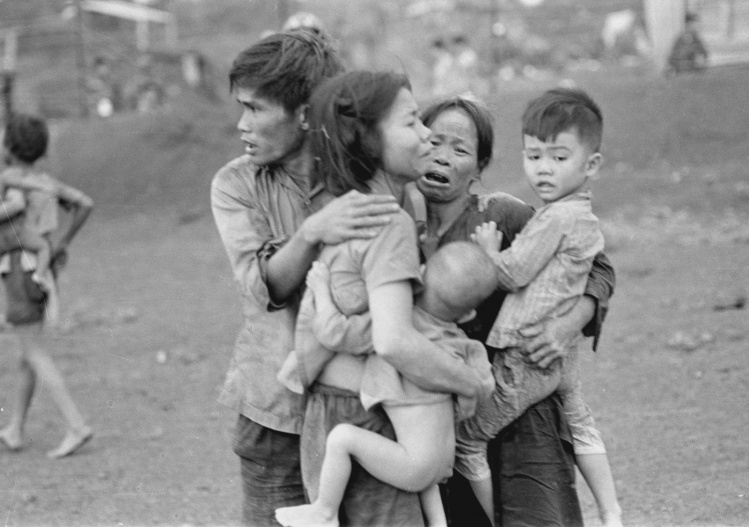 Civilians huddle together after an attack by South Vietnamese forces in 1965; from ‘The Vietnam War’ (CNS photo courtesy AP)

The Vietnam War, the ten-part, eighteen-hour documentary from Ken Burns and Lynn Novick airing on PBS, presents some fresh perspective on war and its role in the development of Christian tradition. Though the documentary underplays how religion played into the prosecution of the war and the protests, it nevertheless makes for particularly interesting viewing for Church historians and religious scholars (including this one, now teaching a small group of wonderful Vietnamese priests and nuns in a graduate course).

For one thing, it helps in considering the relationship between the war and the post-Vatican II period in which we still live. Vietnam was the first war for a post-Vatican II and post-Pacem in Terris Catholic Church. The papacy of Paul VI had to contend with differing positions on Vietnam within the Church, even between top cardinals—the patriotic anti-Communist Cardinal Francis Spellman of New York, for example, vs. one of the four moderators of Vatican II, Cardinal Giacomo Lercaro of Bologna. Lercaro was fired from his diocese in February 1968 (unprecedented at the time, and not repeated since) because his public positions presented an obstacle to the diplomatic efforts of Paul VI to help end the war.

Today in global Catholicism there are notable differences in understanding the morality of war and the relationship between the Church and the military. The Catholic culture of peace in the United States remains identified with key figures such as Dorothy Day and the Berrigan brothers, as prophetic and different from mainstream America and integral in the countercultural posture of American Catholicism. In Europe, post-Vatican II Catholic theology is fundamentally one with secular, mainstream European culture in rejecting the idea of war as sometimes inevitable and something the Church and theology have to deal with. American Christianity and institutional Catholicism have different, more pragmatic takes, and these can shape the different institutional cultures of Catholicism. For example, it would be unimaginable for a European episcopate to elect as chairman of the national bishops’ conference Committee on International Justice and Peace the ordinary of the U.S. Archdiocese for Military Services, as the USCCB did last November. This is just one example of how the two sides of transatlantic Catholicism differ.

But within post-Vatican II Catholicism there is also a divide over the role of history in the doctrine of the Church—that is, how “secular” historical events (in this case, political and military history) should or should not impact Catholic theology. Pope Benedict XVI critiqued this consideration of historical events in development of doctrine in his famous “two hermeneutics” address of December 2005. Good hermeneutics, he said, respect the nature of the Church as philosophically one and unchanged in its essence across history: “The Church, both before and after the Council, was and is the same Church, one, holy, catholic and apostolic, journeying on through time; she continues ‘her pilgrimage amid the persecutions of the world and the consolations of God,’ proclaiming the death of the Lord until he comes.” It was a view of the Church as largely untouched and unchanged by secular history—which was remarkable coming from a pope born and raised in Nazi Germany.

For another thing, the documentary helps in examining how anti-Communism helped shape a worldview shared for a long time by the United States and the Vatican. President Lyndon Johnson’s understanding of the role of Communism in the Vietnam War was not unlike the understanding brought by John Paul II and Cardinal Ratzinger to the issue of Latin American liberation theology in the 1980s. What was in Vietnam a complex mix of communist ideology and national liberation was in Latin America a combination of social-political liberation from oppressive regimes and from a colonialist Catholicism that in the 1970s and 1980s had relied on Marxist analysis. That political-ideological alignment between the U.S. and the Vatican over Communism had an effect on how important ecclesial events would be interpreted. The difficulty in having the Vatican recognize Oscar Romero’s martyrdom, for example, was due to opposition—essentially political in nature—from Latin America but also from cardinals in Rome. The world has since changed, with those geopolitical-ideological alignments having weakened and in turn leading to the current crisis in relations between Pope Francis and important sectors of American Catholicism. The shift in the Vatican can be traced in part to the end of Soviet-sponsored communism in Latin America between 1989 and 1991, but far more to the election, one generation later, of the Latin American Pope Francis—whose first-hand experience with Communism differed considerably from that of his predecessors. Francis’s geopolitics are the product of a different kind of analysis of social and political systems, and this presents a challenge to the West’s imposed world order and the orthodoxies of free-market capitalism supporting that world order. This is a significant element in American conservatives’ problem with Pope Francis. The impact of his pontificate is not just a matter of personal political persuasions different from his predecessors, but part of a geopolitical shift for global Catholicism. Rome is the epicenter of this shift, but the United States is where it’s felt most, both politically and ecclesially.

The Vietnam War also helps us think about the role of wars in how doctrinal and magisterial development might occur. The Vietnam War is integral to the theological history of the post-Vatican II period, in that it took place after the end of the era of theological justification for war. In recent days we’ve had two confirming examples of the fundamental shift that has occurred in modern Catholicism: one was the reaction of Italian Catholicism (including some bishops) against the choice of Pope John XXIII, the pope of the encyclical Pacem in Terris, as patron saint of the Italian army; the other was the ratification by the Holy See of the new treaty prohibiting nuclear weapons.

World War I and World War II also had a profound impact on Catholic theology and the magisterium. World War I had begat change not just in the doctrine of “just war,” but more broadly in the theological view of war in Catholic teaching. Benedict XV’s 1917 appeal to the leaders of the peoples at war was a failed diplomatic initiative (it had no impact on the course of the war), but it signaled a notable shift in papal language on war. The appeal made clear that Benedict XV no longer believed that he simply had to call on Catholics to pray for the end of the war, and that he understood how little sense it now made—in the face of “total warfare”—to limit himself to asking combatants to respect church buildings and the ministers of God. Indeed, he made a direct appeal for a diplomatic solution to end the war. War is thus no longer interpreted as divine punishment against a modern world that has become estranged from God; rather, the Holy See becomes a diplomatic actor in favor of multilateralism and negotiation. If World War I was not “the war to end all wars,” for papal teaching it was the beginning of the end of theological justification for war. Then, not quite thirty years later, the bombings of Hiroshima and Nagasaki in August 1945 created in Catholic theology the same kind of shock that led Austrian philosopher Günther Anders to talk about “an atomic theology” in confronting the impact of nuclear weapons on our understanding of God and religion.

In the context of our political-theological debate on the nature of Church teaching on social issues, this century of development in the Catholic view of war reminds us that for Catholicism, the diplomatic activity of the Holy See is an integral part in the thinking of the Church: on peace and war, on social and economic development, on human rights. This evolution in papal diplomacy from an approach close to the diplomatic activity of nation-states is one of the most profound changes in the Catholic Church over the past century. The recent and steady appeals from Francis for a multilateral, diplomatic solution to the North Korean crisis represent the latest sign of such theological development in contemporary Catholicism.

With his letter of August 1917, Benedict XV opened a new chapter in the international role of the Holy See. With Pacem in Terris in April 1963, John XXIII, the last papal diplomat who was elected pope, laid the theological foundations for a new view of peace and war in connection with a modern Catholic understanding on justice, the common good, human rights, the role of conscience, and respect for the religious liberty of all. One of the great ironies of this moment is how a papal diplomatic structure established between the fifteenth and sixteenth centuries —the age of papal state and the pope as king—is now entrusted with applying and executing the principles of the theological advances made in the past century. The anti-modern, neo-traditionalist sentiments that in some Catholic circles manifest as opposition to the teachings of Vatican II and the papacy of Francis put at risk the developments on peace and war made in the last one hundred years.