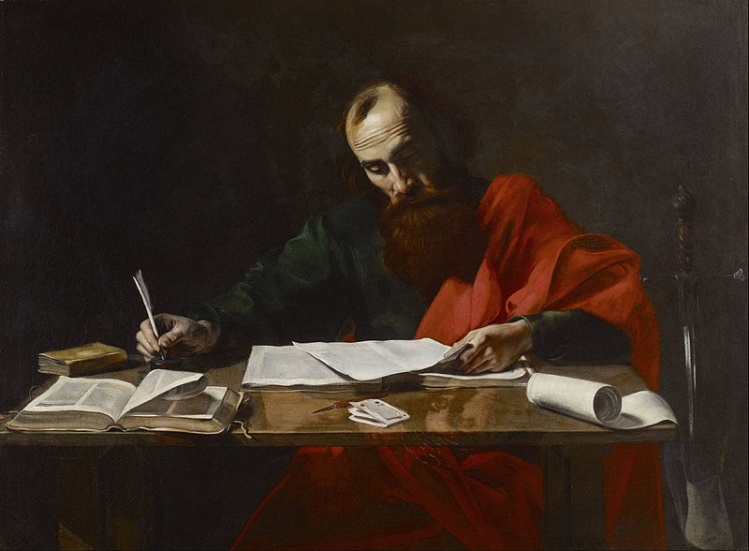 In the Apostle Paul’s writings, I’ve found two matters particularly off-putting and difficult—and a lot of other people seem to share my feelings. One matter is Paul’s cultural origins and attitudes. Was he more “Greek” or more “Jewish”? To what extent did either identity shape his mission and, through him, the character of early Christianity?

Just one problem here is how little we know, comparatively, about Second Temple Judaism, which lasted through the second half of the first millennium BC and up until the Temple’s final destruction in 70 AD. Paul, who died around 67 AD, must have experienced stresses from the climactic conflicts within and around Judaism, but the Epistles and Acts are like half-inch-wide chinks through which to view this history; and its great chronicler from within, Josephus, was a self-justifying Romanized transplant.

If Paul acted as a Jewish man, what did this mean? Life among pagans—and he was at any rate a Diaspora Jew—is far better documented, and there is the suspicion that the dominance of Greek and Roman culture led to adaptations everywhere and left few sharp lines between societies and religions. Nevertheless, Paul’s mission was plainly strained by the different experiences and expectations of pagans and Jews. I can’t read the Epistles without wanting to know a lot more—yet feeling stuck.

The other matter I struggle with is apocalyptic thinking as an influence on Christianity’s genesis and growth. I’m a poet and translator, inclined to urge celebration of biblical texts for their beauty and inspiration, and to prefer a light touch on whatever seems to invite historical over-parsing (especially any grim and condescending psychologizing about the oppressed) on the one hand or superstitious literalism on the other. It’s easy—too easy—for me to shun, on these grounds, discussion of late Jewish and early Christian beliefs about the imminent end of the world. The trouble with that, of course, is that this subject matter is prominent in the texts, and clearly important.

I can’t read the Epistles without wanting to know a lot more—yet feeling stuck.
sharetweet

For these reasons I’m grateful for Paula Fredriksen’s Paul: The Pagans’ Apostle. This wide-ranging, deeply learned, but accessible argument gives, at a minimum, a lot of help in bypassing anachronistic assumptions, mistranslations, and other blind alleys.

Fredriksen first explores what it meant in the ancient world to have an identity such as “Jewish” or “Greek”—not what we would think, given the identity politics of today. Ethnicity, nationality, clan, class, the arts, education, and religion formed something like a single, nonnegotiable legacy. Yet when it came to these categories, the ancients could be surprisingly accommodating. We might shake our heads at the thought of Jewish boys in Alexandria exercising nude in a gymnasium. We might imagine that a wealthy donor to a synagogue who also observed her city’s polytheistic cult must have been shocking and singular. But letters, legal documents, and inscriptions don’t lie, and the logic of live-and-let-live is plain: when custom and ritual mattered more than personal assent to dogma, there was much less to fight about concerning religion—even in cities where people fought like cats and dogs over politics and their ordinary personal affairs.

These realities entailed a surprising amount of fudging even with Judaism’s famous “monotheism.” In the pre-Christian and early Christian eras, the question of which god or gods existed was, except to a few intellectuals, not compelling. Gods existed through their public and communal cults, which quite demonstrably and persistently existed. Through constant and elaborate observances, people acted out their loyalty to the commonwealth and its laws, to their common past and indivisible future.

Religious conflict did arise, but mainly in a way very different from modern religious conflict. If individuals neglected the cult that, in the public mind, enacted the soundness and fertility of humans, animals, and fields, the success of the army and the flourishing of trade, the god or gods would take revenge on the whole society, with plague, famine, economic collapse, and natural and military disasters. Not to honor one’s own god or gods was the basic contagious sin. Because different societies could recognize that they shared this ethic and respect each other for it, even some pious Jews more or less condoned polytheism, backed up by Scripture treating the gods of other nations as inferior deities—daimonia in the Greek Septuagint version of the Old Testament. Paul evidently held this to be true.

In the eyes of many Jews, the apocalypse itself would be required for pagans to turn toward the worship of the one true God. Even then they might not be considered able to “convert” in the modern sense of fully joining another religion. (Jewish circumcision after the eighth day of life was widely held to be invalid, though some adult proselytes did have themselves circumcised.) Fredriksen calls the pagans who turned to Judaism “ex-pagan pagans”—quite an awkward formulation, but any other term would still have to account for what to us is a great paradox: in the heavenly arrays of the saved in apocalyptic literature, all the nations, tribes, and so on are who they were before. The only difference is that now they do one critical thing, worship God, having ceased to worship idols.

Christianity realized on earth, in the form of a multiethnic church, some measure of the apocalyptic visions long familiar to Jews. This came about, according to Fredriksen, by accident. The sense that God’s Kingdom was coming encouraged the gathering in of Palestinian Jews to the Jesus movement in preparation; the failure of the Kingdom to manifest itself right away in material, historical form suggested that Diaspora Jews must come into the fold too. Pagans were already there in the Anatolian and European synagogues, participating in various ways, and Paul found them receptive to his message. When, generation after generation, the world failed to end, the Kingdom of God was reconceived and seen as transcendent; the terminology of Middle Platonism was helpful here.

Christianity realized on earth, in the form of a multiethnic church, some measure of the apocalyptic visions long familiar to Jews.
sharetweet

So far, so plausible and so intriguing—but, when one thinks about it, also reductive.

Sometimes this book’s pile-up of facts hauled in from the periphery threatens to get in the way of reading Paul, of gaining a commonsensical impression from his own words. Granted, my “commonsensical impression” may provoke snorts even among the reverent. Paul can come at a subject from several directions almost at the same time; he can use rhetorical tropes like a special language (this is the characteristic style of literary Greek); he can be peremptory and elliptical. But inherent in his message of God’s unfailing love is a plea to the reader for patient toleration of complexity and strangeness. Complying with the plea isn’t about complete, submissive agreement with the text’s conclusions; it’s just about an honest effort to read what Paul actually says rather than what one might expect or wish him to.

But in many of Fredriksen’s arguments, irrelevant and contradictory information actually crowds out Paul’s voice. For example, in discussing Galatians 3:10–14 and interpreting the word “cursed” as applied to crucifixion, she brings in far-flung instances of undeserving persons’ being crucified, as if that somehow undermines Paul’s—scripturally pretty well attested, empirically pretty sound—characterization of Jesus’ crucifixion as a “curse.” She concludes: “The idea that Jews would be (actively and aggressively) scandalized by the message of a crucified messiah because of his manner of death should be retired from New Testament scholarship.” Say what?

In other places, Fredriksen narrows causality to suit her thesis. She claims that Paul’s reason for discouraging marriage in the famous 1 Corinthians 7 passage was the swift coming of God’s Kingdom. Paul does give this as one reason his followers might well choose to remain single (7:29–31). But another is that people have different spiritual gifts to deploy (7:7) under the overarching rule of avoiding fornication (6:13–20; 7:2,5,9). The passage is actually a nuanced treatment of calls to celibacy, drawing on both Jesus’ new rules (7:10–11) and Paul’s own authoritative opinion (7:12 et passim), and including tender-sounding advocacy of the state he considers less stressful, as well as more conducive to orderliness and devotion to the Lord (7:32–35).

Paul: The Pagans’ Apostle is, on balance, a good source for historical context, a keen stimulus for rereading Paul’s letters, and a great book to argue with.