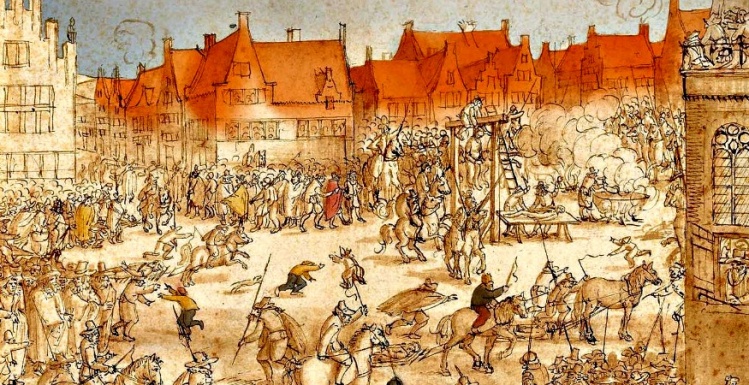 In 2007, a small theater company in Northern Virginia attracted national attention with a Macbeth staged entirely in the nude. The Washington Post assigned me to review the production. The experience was less of an ordeal than I had anticipated—the show’s lighting was muted, and the actors sported some tactfully applied body paint—but the performances weren’t revelatory, and the overall project seemed misguided. As far as I could see, the nakedness conceit was not anchored in any aspect of the Scottish play.

It occurred to me at the time, however, that a case could be made for an in-the-buff production of Shakespeare’s King Lear. After all, that tragedy’s eponymous royal rips his clothing off in the middle of a storm, while pitying other “poor naked wretches” who are similarly weather-beset. King Lear is partly about loss, exposure, and vulnerability.

Support for a full-monty Lear might even be garnered from Shakespeare scholar James Shapiro’s fascinating new book, The Year of Lear: Shakespeare in 1606. Shapiro writes that “the idea of nothingness and negation is philosophically central” to King Lear, which Shakespeare based on King Leir, a clumsy non-tragedy by a now-anonymous scribbler. While reimagining this piece of tripe, which had featured the word “nothing” as part of a dirty joke, Shakespeare turned the idea of zilch into a haunting theme. The words “never” and “nothing” turn up more than thirty times in King Lear, starting with Cordelia’s impolitic admission that she can add diddly-squat to her sisters’ specious flattery of their father.

“Each Shakespeare play has its own distinctive music and, not unlike a symphony, its themes are established at the outset,” Shapiro writes. “Shakespeare seems to have decided that ‘nothing’ would be the motif of Lear’s score.” Surely a band of actors performing the play in their birthday suits would be giving this motif a visual correlative.

You don’t need to be a provocative thespian to appreciate Year of Lear: Like other Shapiro works, the book is a brilliant, accessible fusion of meticulously researched historical narrative and keen-eyed literary criticism. Shapiro’s writing has sometimes delved into how religious ideas and struggles have shaped plays and audience reactions. His Oberammergau: The Troubling Story of the World’s Most Famous Passion Play chronicled controversies surrounding the anti-Semitic elements in a centuries-old New Testament–inspired German production. Contested Will: Who Wrote Shakespeare? examined the history of the Shakespeare-authorship question, touching on how developments in post-Reformation Biblical scholarship influenced the movement that sees another writer’s hand (the earl of Oxford’s, Christopher Marlowe’s, etc.) behind the famous plays.

The conflict between Protestantism and Catholicism in Jacobean England is a theme in Year of Lear, which follows the model of Shapiro’s A Year in the Life of William Shakespeare: 1599. That book reconstructed the historical circumstances that informed and greeted Henry V, Julius Caesar, As You Like It, and Hamlet. This new work looks at the twelve-month period in which Shakespeare seems to have written Macbeth and Antony and Cleopatra and finished King Lear. (Dating Shakespeare’s plays can be a tricky and uncertain business.)

Significantly, in 1606, England was still shuddering from the discovery of the Gunpowder Plot in the autumn of 1605. Allegedly planned by a group of English Catholics, the plot had aimed to blow up King James I and Parliament. Discovery of the conspiracy resulted in anti-Catholic legislation and the gruesome torture and execution of the accused plotters.

Shapiro demonstrates how the plot, its aftermath, and the country’s mood of paranoia left their mark on the monarchy and the nation, but particularly on Macbeth. The tragedy begins and ends with acts of regicide, and questions whether evil stems from infernal forces or from human will, refusing easy answers in a way that surely resonated in England in 1606. And the script plays with the notion of “equivocation,” an idea associated at the time with the Jesuits and with a type of subtle reasoning that seventeenth-century English authorities feared might allow treacherous Catholics to lie with a clean conscience.

The words “equivocate” and “equivocator” famously pepper the Porter scene in Macbeth; Macbeth himself also recognizes, in Act V, that his supernatural interlocutors have duped him with a fiendish “equivocation.” Moving beyond these obvious examples, Shapiro perceives instances of equivocal thought throughout the play, a pattern that, he argues, allows Shakespeare to paint an unnerving portrait of an infected and muddied moral landscape. (Interestingly, the connections between Macbeth and the Gunpowder Plot were also recently explored in the marvelous play Equivocation, by Bill Cain, an award-winning playwright who is also a Jesuit priest.)

WHILE SHAKESPEARE may have begun writing Lear before the discovery of the Gunpowder Plot, the era’s religious tensions echo in this play too. In a particularly striking chapter, Shapiro explains the literary impact of Samuel Harsnett’s 1603 volume A Declaration of Egregious Popish Impostures—about fraudulent exorcisms conducted by Catholic priests—on Lear. Delving into the cases of the exorcisms, which had resulted in confessions by people who had faked symptoms of demonic possession, Harsnett inadvertently gave Shakespeare ideas for the language and behavior of the crazed Lear and for those of Edgar, the character who masquerades as a deranged beggar. Scholars have seen debts to Harsnett’s book in over eighty passages from Lear.

Shapiro takes care to point out that, “while ostensibly an indictment of fraudulent Catholic exorcisms, the Declaration is also...a portrait of the many ills besetting mainstream [Jacobean] English culture,” including cruelty and callousness by a Protestant establishment anxious to monopolize authority. Cruelty and the abuse of authority are topics that Lear wrestles with. “The unrelentingly vicious, scabrous, and manipulative world of the Declaration,” Shapiro notes, “acts like a varnish that seeps into and stains the dark play.”

A Year of Lear draws many other intriguing connections between happenings in Jacobean England and the three 1606 tragedies. Shapiro chronicles a state visit by King James’s brother-in-law, King Christian IV of Denmark, suggesting that the pomp and gossip that surrounded the event may have given Shakespeare ideas for Antony and Cleopatra. He weighs the impact of a number of high-profile sermons on England’s national conversation. With recourse to harrowing details, he discusses England’s 1606 plague outbreak, explaining how that catastrophe shaped the last stage of the Bard’s career.

Shapiro’s writing never gets too speculative about the thoughts and actions of Shakespeare, who left a famously slender biographical paper trail. Rather, The Year of Lear refers constantly to specific texts, by the Bard and others, deploying details and reasoned deductions so skillfully that they conjure up an implicit image of Shakespeare witnessing, reading, thinking, and turning national experience into art. In some ways, it’s as close as you’re going to get to the playwright who wrote (in King Lear), “Unaccommodated man is no more but such a poor, bare, forked animal as thou art.”