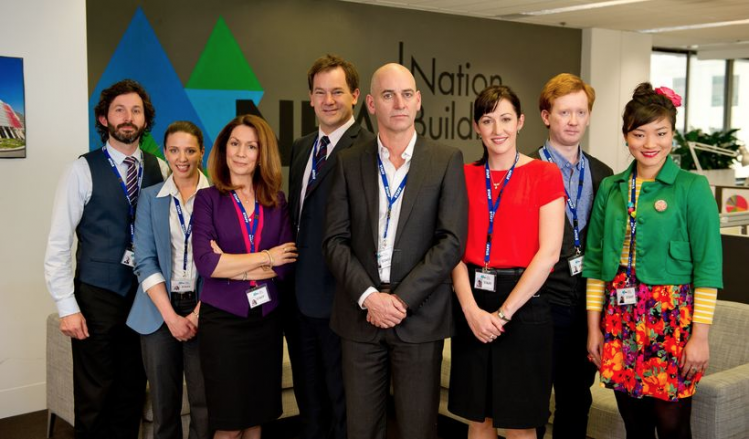 Comedy is not supposed to travel well. It’s perhaps for that reason that, at a moment when world television is more accessible than ever to American audiences, the international shows garnering much of the attention have been dramas (the cinematic German detective drama Babylon Berlin, for instance, or the gripping Israeli thriller Fauda). But two can’t-miss series from abroad demonstrate that comedy isn’t always lost in translation from one language or culture to another. The priceless Australian workplace satire Dreamland and the endearing French showbiz-industry comedy Call My Agent! parlay contemporary social foibles into plotlines that are both telling and hilarious.

Now airing on a number of local public-television stations around the country, distributed by American Public Television, Dreamland is a side-splitting spoof of 9-to-5 culture. The setting is the (fictional) Nation Building Authority, an Australian government organization focused on major infrastructure projects. As the down-to-earth Tony (Rob Sitch) and Nat (Celia Pacquola) strive to complete container terminals, highway-upgrade projects, and other essential public works, their time and energy are regularly siphoned off by the harebrained schemes of their bosses, Jim (Anthony Lehmann) and Rhonda (Kitty Flanagan). Trendy office practices—wellness programs, safety audits, muffin platters, a morale-building employee talent show—keep getting in the way of real work.

Dreamland (titled Utopia in Australia) benefits from terrific pacing: each comic moment works well in part because it gets brisk, matter-of-fact framing for just a fleeting moment before the story moves on. The humor also benefits from grounding in a real phenomenon: the business world’s veneration of spin and branding. Again and again, the series shows us Tony and Nat’s common sense colliding with, and losing to, the rash, buzz-generating initiatives proposed by Jim and Rhonda.

In one episode, the bosses insist on reannouncing a high-speed rail project that experts have pronounced unviable. Their naysaying does not deter Rhonda: 95 percent of Australians approve of the fast-train idea, she says. As for the other 5 percent, who are they? “Engineers, economists, experts in transport logistics…” Tony ventures. “The lunatic fringe!” Rhonda retorts. “Real people love it!”

Despite a resurgence of xenophobia and nationalism around the world, people in every part of it are subject to the same economic and cultural forces.
sharetweet

Dreamland mostly sticks to its characters’ office ordeals. For a workplace comedy that also makes hay with private life, you can turn to Call My Agent! (French title: Dix pour cent), about the professional and personal tribulations of a set of talent reps. The series streams on Netflix.

The driven yet mishap-prone agents at the boutique firm ASK in Paris struggle with family and romantic quandaries that generate gossip and goof-ups, in and out of the office. That’s particularly the case after Camille (Fanny Sidney), the illegitimate daughter of high-powered agent Mathias (Thibault de Montalembert), joins ASK as the assistant to Mathias’s ambitious colleague Andréa (Camille Cottin), who does not know about Camille’s blood connection.

Amidst their personal turmoil, the ASK team members scramble to cope with the neuroses, career crises, and volcanic egoism of the high-profile artists they represent. In the show’s central gimmick, every episode features a real star making a cameo as an exaggerated version of him or herself. (French celebrities apparently have an excellent sense of humor.) In one plotline, the workaholic Isabelle Huppert gets herself into a fix when she signs up to film two major movies at once, in defiance of exclusivity clauses. In another, Isabelle Adjani pleads with her agent, Mathias, to get her a gig on Game of Thrones.

As with Dreamland, the comedy in Call My Agent! pivots on our recognition of a broad cultural phenomenon: in this case, it’s our society’s adulation of fame. Because celebrities have such visibility and cultural clout, it’s all the funnier to see their doppelgangers absorb kooky hits to pocketbook and self-esteem. Call My Agent! combines this overarching theme with subsidiary aperçus about media and showbiz, as when Camille has to edit a Wikipedia page to make an actress look younger. Or when Mathias, seeking to fix the tax-debt problems of actress Audrey Fleurot, wrangles her a made-for-clickbait film role as a militant-environmentalist stripper, even though she is too out-of-shape for the pole dance the role requires.

The entertainment-industrial complex that Call My Agent! skewers is increasingly an international one, a point reinforced by that not entirely farfetched joke about Isabelle Adjani on Game of Thrones. The business-school groupthink skewered on Dreamland also crosses borders. Indeed, despite a resurgence of xenophobia and nationalism around the world, people in every part of it are increasingly subject to the same economic and cultural forces. Brilliant shows like Dreamland and Call My Agent! show us the lighter side of this steady globalization.

Those Tiaras! Those Gowns! 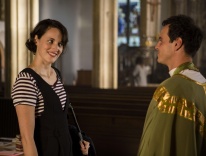