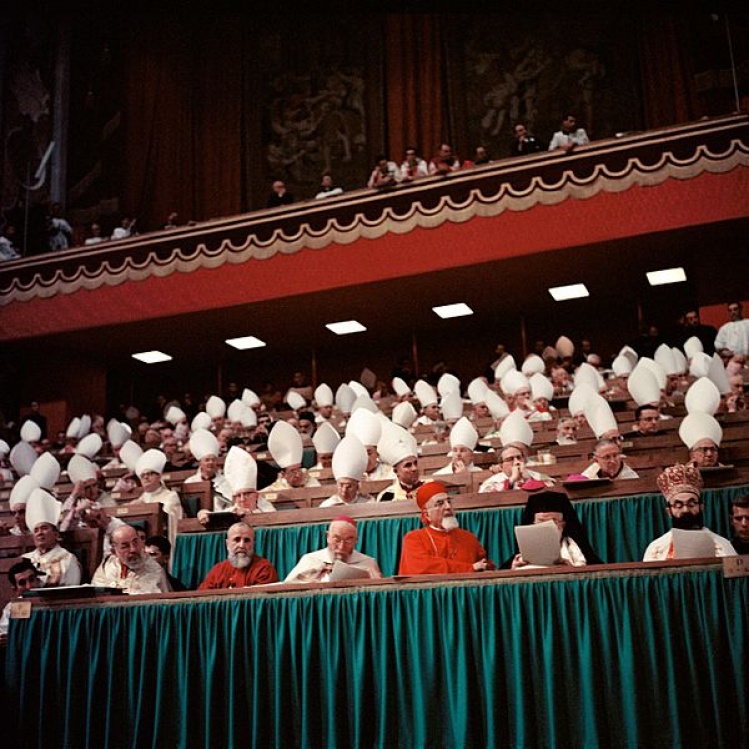 Will divorced and civilly remarried Catholics ever be re-admitted to the Communion line? That was the question—first raised by Cardinal Walter Kasper in a February 2014 speech to the College of Cardinals—that shaped much of the media coverage of last October’s Extraordinary Synod on the Family. And it’s already driving reporting on this month’s synod, when hundreds of the world’s bishops will again take up pastoral issues related to family life. Many church-watchers have noted how remarkable it was that bishops were considering a change in church practice—and that many of them have been disagreeing about it in public. But most news coverage of the debate failed to mention one of its most remarkable features: It has happened before—fifty years ago, at Vatican II.

On September 29, 1965, the Melkite Archbishop Elias Zoghby, patriarchal vicar for Egypt and the Sudan, rose to address the Council fathers. They had been discussing the part of Gaudium et spes that treated marriage and the family. While contraception was the most hotly debated issue, Zoghby announced that he would discuss a problem “more crucial than birth control”— namely, how the church could assist an innocent spouse whose husband or wife had abandoned their marriage to form an illegitimate union with another person. Zoghby argued that it was wrong for pastors to tell an abandoned spouse that she or he had no other choice than perpetual continence. He acknowledged that marriage was taught to be indissoluble “by the positive law of Christ,” while noting Christ’s words “except on the ground of unchastity” (Mt 5:32; 9:6-9). A proper response would be to allow the innocent spouse to contract a second marriage. Indeed, that practice had been “preserved in the East, and was never reproved during the ten centuries of union [with Rome].” He remarked that the Council of Trent had even taken the traditional Eastern procedure into account. In conclusion, Zoghby urged that during such a period of ecumenism, dialogue, and recovery of Patristic tradition, the whole church should consider adopting this practice.

That night, Pope Paul VI’s secretary asked the Swiss Cardinal Charles Journet to respond to Zoghby. The cardinal worked until 1 a.m. to prepare his speech. The next morning, on orders of the pope, Journet displaced the scheduled first speaker. In his brief but forceful intervention, Journet stated that the Catholic Church preserved Jesus’s teaching on the indissolubility of marriage, and had no power to change matters of divine right (ius divinum, referring to Mk 10:2ff and I Cor 7:10-11). The seeming exception in Matthew, “except on grounds of unchastity,” means that separation is allowed in the case of adultery, but does not mean that a second marriage is licit. Journet continued:

It is true that some churches in the East have admitted divorce in the case of adultery, and have also allowed innocent spouses to contract a new marriage. But this happened, given the existing relationships between state and church at the time, under the influence of civil law.... When these [Eastern] churches admitted other grounds for divorce beyond the one introduced above, it appears that they followed...a procedure (modus agendi) more human than evangelical.

Paul VI’s choice of Journet was significant, because the Swiss theologian was eligible to speak as a Council father only because the pope had made him a cardinal in February 1965. For years, he had been one of Paul VI’s favorite theologians. The pope would later ask Journet to help him write his apostolic constitution on indulgences, Indulgentiarum doctrina.

The newspapers described Zoghby’s proposal as a “bomb” dropped in the council chambers, suggesting that he had advocated for divorce (not unlike some of the news coverage following last month’s news that Pope Francis had streamlined the annulment process). As Zoghby left the aula after Journet gave his response, reporters rushed to question him. In his My Journal of the Council, Yves Congar took note of the controversy: “Discussion on marriage. Journet responds in an unyielding (raide) fashion to Zoghby who had, yesterday, brought up the Greek fathers on the indissolubility of marriage. He does not see any solution for broken and destroyed marriages other than heroism. I don’t take notes of the discussions, it’s in the newspapers.”

In the Acta of the Council, the only hint of support for Zoghby’s proposal is found in a comment by Archbishop Giuseppe Descuffi of Smyrna, an Italian Vincentian. His position was very similar to Zoghby’s, with the aim of promoting union with the Eastern churches. He argued that nullity could be declared because of deliberate and ongoing adultery, which would indicate a lack of the kind of consent needed to form an indissoluble bond.

Zoghby’s superior, Patriarch Maximos, was asked by the newspaper La Croix about his vicar general’s proposal. The patriarch replied that he did not know beforehand that Zoghby was going to raise the topic, and distanced himself from Zoghby’s position:

The church must hold fast to the indissolubility of marriage, for, even though in certain cases the innocent spouse is sorely tried because of this law, the whole of family life would be shaken and ruined without this law. Moreover, if divorce in the strict sense were to be allowed on the grounds of adultery, nothing would be easier for less conscientious spouses than to create this cause. The contrary practice of the Eastern Orthodox churches can be supported by a few texts by certain fathers. But these texts are contradicted by others and do not...constitute a sufficiently constant and universal tradition to induce the Catholic Church to change its discipline on this point.

That didn’t silence Zoghby. He spoke again on October 4, 1965, reminding the Council fathers that his proposal was limited to the innocent abandoned spouse who was “condemned to live...in forced continence” through another’s fault. He had deliberately avoided using the word “divorce” so as not to call into question the “immutable principle of the indissolubility of marriage.” He was not asking the church to recognize divorce, but rather to offer a pastoral dispensation. Such a dispensation would not undermine the indissolubility of marriage any more than the “Petrine Privilege,” which allows a pope to dissolve a valid natural union in order to allow someone to enter a sacramental union. Zoghby had only meant to suggest that the Catholic Church consider adding adultery or definitive abandonment to its list of grounds to declare a marriage null. He left it to the church to judge whether it was opportune to accept his proposal. With that, discussion of the matter during official Council proceedings came to an end.

The church’s willingness to grant annulments while refusing to permit divorce troubles many Catholics. At the Vatican Council’s concluding session, Melchite [sic] Archbishop Elias Zoghbi [sic] denounced the “subtle casuistry” of the church: “It happens that after ten or twenty years of marriage, they suddenly discover an impediment that permits everything to be resolved as though by magic...” He suggested that the Catholic Church allow divorce on certain grounds, such as abandonment, as the Orthodox churches do.

Time noted that while Journet, “presumably on Pope Paul’s orders, hastened to spike further debate by reasserting the church’s traditional teaching,” Zoghby had nevertheless, according to theologian Edward Schillebeeckx, “placed the problem on the table, and that in itself is most important.”

There are some striking parallels between the Zoghby and Kasper proposals. Both came to the attention of the media when speaking to a meeting of bishops in Rome. Both presented their proposals as pastoral responses to a pressing problem. In both cases, a pope called on a theologian to make a public intervention. Cardinal Journet was favored by Paul VI. Pope Francis invited Kasper to speak to the College of Cardinals last year, and has recommended his book Mercy. But there are also significant differences between Zoghby and Kasper.

Zoghby carefully avoided speaking of divorce. He addressed only one kind of marriage breakup: the separation resulting from the abandonment of an innocent spouse by an unfaithful one. In that case alone, the church could allow the dissolution of the existing bond in favor of the innocent victim, he argued, allowing her or him to remarry and receive other sacraments. Zoghby found support for this option in tradition and patristic teaching. Kasper’s proposal is both more novel and more far-reaching, if I understand it correctly. In determining whether a divorced-and-remarried person could return to the sacraments, the reason for the failure of the first marriage would be of less weight than one’s “sincere interest” in receiving the sacraments in the present.

In the Zoghby affair, one bishop on his own initiative made a revolutionary proposal that was quickly slapped down by a cardinal hand-picked by the pope. This effectively silenced further discussion. At the 2014 consistory, a cardinal hand-picked by the pope presented a radical proposal—as Kasper himself has called it, meaning “getting down to the root (radix)”—leaving it to other bishops to decide. The paragraph of last year’s final synod report mentioning the Kasper proposal failed to win the customary two-thirds vote required for publication, yet the pope put it in the final text anyway, setting the stage for this month’s synod. Paul VI shut down the debate. Francis enlarged it. The similarities between the two events are striking, but it’s their differences that may be more significant. For when Pope Francis opened the synod process last year, he urged the assembled bishops to “speak freely.” In the end, that may be the difference that matters most.

Thomas Buffer is the pastor of St. Mary Catholic Church in Marion, Ohio.