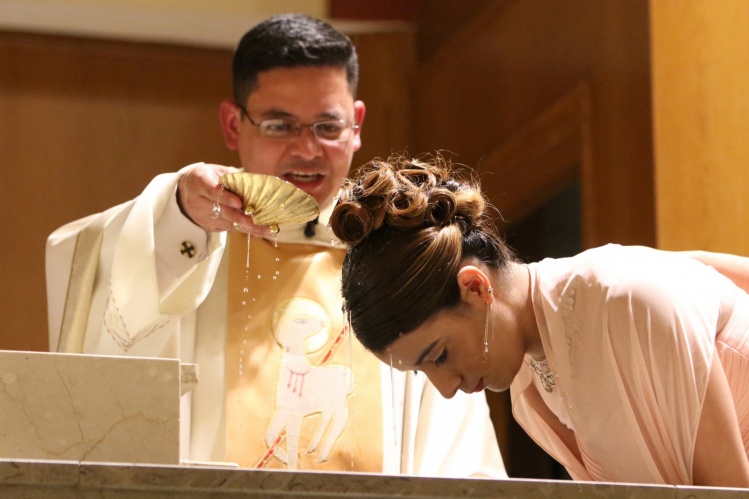 After the release of our special feature on Catholic identity last December, many readers expressed an interest in telling their own stories about why they entered, left, or stayed in the church. We’re​ pleased to publish the third set of replies here. Catch up on the first piece here, and the second here.

I am Catholic simply because God wanted me to become so. Attracted to the church from early childhood, I instead became an atheist as a young adult. But inspired by a Catholic friend, I asked God—if He was really there—to make me believe in Him. He did just that, coming to me while I was riding home on a city bus, reading a book about St. John of the Cross by Thomas Merton. I still have the book, but I have never been able to identify the exact sentence that began my transformation. I know only that in that moment, the grace of God descended upon me. I knew Him, knew He was there, and realized that I possessed (without knowing it) what I had been searching for my entire life.

Some years later, I realized that what had happened to me that day was “the baptism of the Holy Spirit.” I was totally changed for life.  I started RCIA instruction the following week, and soon began to long to receive Jesus in the Eucharist, begging the priest to move up the date of my reception into the church. The Eucharist has been the center of my devotional life ever since.

I perceived a vocation to religious life, but because of my relatively advanced age at my conversion (I was thirty-four), I rushed into it, entering an order without sufficient discernment. Finally recognizing that it was not the place God wanted me to be, I left a few months before final vows, at age forty-three.

I felt that I had no choice but to return to my career as an academic librarian. Still, leaving the convent was very traumatic. I interpreted my departure from religious life as God rejecting me, and I was very bitter and angry toward Him for years. Gradually, I drifted away from the Church.

After retirement, I realized that I was no longer angry, and that I wanted to go back. During a lengthy Confession at a local parish, I explained to the priest where I had been for the past two decades. He casually remarked that he thought I had made a mistake in not discerning religious life again. I said it would have been impossible because of my age. But over the next few months, I realized he was right: all my professional success suddenly meant absolutely nothing to me, because I knew that I had not done what God wanted me to do. Only now, it was too late!

One night, praying through tears, I said to God: “Lord, I am going to ask You for something impossible: if there is any way I can still live a consecrated life, even now, show me, and I will do whatever You want.”

Two days later, as I knelt during the Consecration during Mass, I looked down at the seat of the pew directly in front of me. There was a piece of paper with “Sisters of St. Joseph of Concordia, KS” written at the top of the page. I was stunned. I knew I needed to remember the name.

Later that night, I emailed the vocation director. I learned that the sisters have no age limit. I went to visit, and immediately felt at home. I could see that their charism had always been mine.

Clearly, God sent me to them. As incredible as it seems, at seventy-one, I am now a canonical Novice, preparing to make vows next October.

Most of the Christian mystics I read about were Catholic, so I began to ask myself whether I, too, could become Catholic.
sharetweet

I grew up in a Protestant denomination in the 1950s and 60s. But in the 70s and 80s, I slowly became disenchanted with Christianity, since it had become more political and more conservative. It seemed that all I heard from Christians were harsh judgments and condemnations. I heard comparatively little about the peace and love of God. Finally, I left the religion.

However, I was always interested in having a closer relationship with God, so I began to explore other religions. I learned about spiritual practices from the Buddhists, and found out that both the Hindu and Sufi traditions had great mystics who also spoke about a close relationship with God. This was what I wanted, but I could never fully convert to another religion. I became “spiritual, not religious,” but I continued to explore.

About ten years ago, I read about Thomas Merton and his trip to Asia, where he met with Buddhists, Hindus, and others. I was fascinated, and rushed to find out more. This led me encounter many other Christian mystics. They all said the things that mystics from other religious traditions seem to agree on—that God exists and that we can have a personal relationship with Him. Most of the Christian mystics I read about were Catholic, so I began to ask myself whether I, too, could become Catholic.

At first, I quickly dismissed the idea, but the question returned again and again. After a while, I did indeed begin to sense that perhaps God wanted me to become Catholic. But I still wasn’t ready. However, reading Thomas Merton, Thomas Keating, and Richard Rohr convinced me that I might find the God of peace and love again as a Catholic.  Despite some doubts, I took the plunge and converted in 2015, at age sixty-five. While the institutional church sometimes disappoints me, I didn’t become Catholic because of the institution. I became Catholic because I knew that it was the way to a closer relationship with God. I haven’t been disappointed!