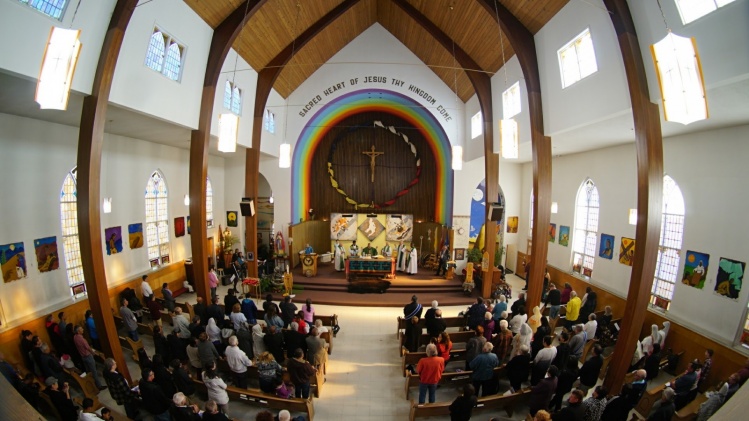 After the release of our special feature on Catholic identity last December, many readers expressed an interest in telling their own stories about why they entered, left, or stayed in the church. We’re​ pleased to publish the first of these replies here. Check back over the next several days for more stories.

Five nuns were at Mass in a small chapel in Calcutta in the summer of 1954. The temperature was 104 degrees, and there was no fan or air-conditioning in the room. I was the lone altar boy, all of seven years of age. The heat got to me. I fainted, and temporarily lay unconscious. The next thing I knew, a diminutive nun (dressed in a white saari with a blue border) splashed some water on me, gently but irritably telling me to get up—which, of course, I did. I was hardly in a position to resist the orders of a future saint.

Such was my introduction to Mother Teresa of the Missionaries of Charity. I got to meet her fairly often, as my father and I used to assist her in her humanitarian work. But I cannot say that I ever warmed to her or her version of Catholicism. This had partly to do with the fact that most of my education was conducted by a remarkable group of Belgian Jesuits at St. Xavier’s School, Calcutta, who taught a liberal and, for its time, enlightened version of the faith.

The contrast between these two experiences taught me the vital difference between faith and belief. The language of faith registers a basic spiritual experience and orientation, which the language of belief tries to formulate in propositional or creedal terms. There is, of course, a dialectical and reciprocal relation between faith and belief, but for me faith is primary, while belief (important as it is for the spiritual life) is secondary.

The Catholic Church is showing itself to be an all-too-human institution with its flagrant abuse of power and its protective, self-aggrandizing manner. But the eyes of faith tell me that it is still, despite its many human failings, the Mystical Body of Christ.

The strength of renewal we found at Taizé tightened our hold on our Roman Catholic identity.
sharetweet

We are cradle Catholics of over eighty years—products of Catholic primary school and Jesuit higher education—accustomed by force of habit to occasional encounters with preoccupied priests, listless liturgies, medieval rituals, and content-free homilies. Yet we would have been long gone from the Roman Church if our spiritual journeys were guided only by a hierarchy marred by pastoral incompetence.

But we are still here. Years before the waves of revelations of priestly sex abuse, silenced victims, and hierarchical cover-ups, we began attending weeklong spiritual exercises every year at the ecumenical monastery of Taizé. There we found a deep and vast spirituality in the prayer of Christians who, despite their many nationalities and religious traditions, came together to worship God with one voice. We rediscovered the fellowship of praying together, and grasped again the promise and vital reality of Christ’s real presence in the Eucharist. The strength of renewal we found at Taizé tightened our hold on our Roman Catholic identity.

Our introspective discoveries at Taizé led us back to the basic humanity and generosity of Christ’s teachings. This core of Catholic theology is now frequently overlooked in the frenzy surrounding the sex-abuse catastrophes. By returning to the basics, we have been able to deal with the hypocrisy and reproductive obsessions of a distracted Roman hierarchy. We believe that within these truths lies the future of the church. And so we remain Catholic—if not always in agreement with the preoccupations and decisions of the hierarchy, at least in daily practice.

Each day in my work as a chaplain, I see the powerful sustenance that deep faith provides to the sick and dying.
sharetweet

My work as Director of Spiritual Care at a hospital in downtown Brooklyn helps me to see why I need my faith. I converted to Catholicism more than ten years ago, twenty-five years after I married into a Catholic family—more than one member of which had been sexually abused by a priest. I didn’t really want to convert, but I couldn’t help it: my heart converted before my head did. My work as a hospital chaplain, begun as a result of my conversion, confirms the grace and understanding that my conversion has granted me.

I’m fearful for Catholics who renounce their faith in response to the abuse scandals. It feels to me like they are throwing away the dearest thing they have, the only thing they will need until the very end, because it has been mishandled by men of clay.

I’ve noticed that patients who have practiced any religion since childhood tend to deal with sickness and death much more easily and gracefully than those who have not. The more practice my Catholic patients have—attending church, receiving the sacraments, and praying the rosary—the easier it is for them to discover the blessing of the comfort of the Holy Spirit. My patients of all faiths prove to me daily that God exists, that love is the greatest power of all, and that prayer can do miracles: just maybe not the miracles we think we might hope for.

I need my faith and my church to make it through this crisis, and all the crises to come.

We are the church. And if we leave, how can the Spirit prevail?
sharetweet

Even though the institution is broken, I stay because we are the church. Not the authoritarian, often foolish hierarchy, but we who are the People of God. My faith is in the Mystical Body of Christ, not the flawed institution which, because it is human, will always suffer corruption.

With a few notable exceptions, the institution has been oppressive toward women and hostile to modernity since before the reign of Pope Pius IX. But we do not place our faith in the institution. Our belief is that all of creation was formed by a divine love which expressed itself through the Incarnation and the Resurrection. Since that moment, we have been nurtured by grace, and are led by the Spirit to union with the same love.

We need the institutional church because our souls long for the sacraments and the grace they confer. Our faith has nothing to do with the kind of pharisaical rules which lead away from the sacraments rather than toward them. Our faith is renewed through the Sacrifice of the Mass. I don’t expect the institution to reform itself. That is the work of the Spirit, moving among us. But we are the church. And if we leave, how can the Spirit prevail?

What Counts as Corruption?