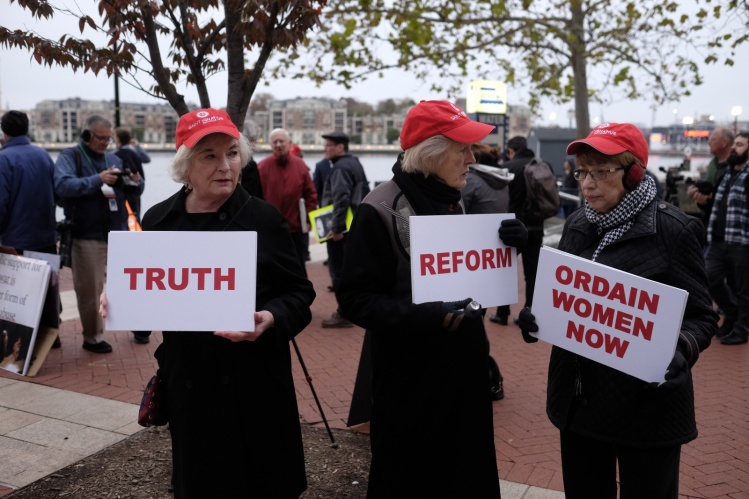 Protesters gather outside the annual meeting of the U.S. Conference of Catholic Bishops in Baltimore (CNS photo/Rick Musacchio, Tennessee Register)

After the release of our special feature on Catholic identity last December, many readers expressed an interest in telling their own stories about why they entered, left, or stayed in the church. We’re​ pleased to publish the second set of replies here. Catch up on the first here, and check back over the next several days for more.

I am a cradle Catholic, having spent seven youthful years in minor seminaries. I also have an advanced degree from a Catholic theologate that I earned at age 47. I still have faith, but I’ve left the institutional church. It has repeatedly chosen dishonesty in decision making while continuing to reject the recommendations of its own experts.

In 1976, the Pontifical Biblical Commission found that the New Testament said nothing against ordaining women to the priesthood. Pope Paul VI rejected its findings, along with recommendations of another committee concerning birth control. He seems to have wanted to avoid implying that his predecessor had erred. Then the International Commission on English in the Liturgy was gutted simply for following its charter. A faulty missal translation was consequently imposed by unnamed hierarchs. That was the last straw.

I have been entirely educated by Catholic institutions that taught me to first form, then trust, my conscience—aided by the sound reasoning of my mind. I can no longer go to Mass and experience the dishonest translation, the return of clericalism under the revised General Instructions of the Roman Missal, and the abandonment of “full, conscious, and active participation by all present.” The church’s dishonesty and disrespect for its own experts and sound reason have driven me from membership in the Roman Catholic Church.

Why did I leave? Too many questions, and too few answers. Plus, a personal affront that I have a hard time forgetting.
sharetweet

After five years of Catholic grammar schools, Catholic high school, and college, I found it difficult to reconcile what I was being taught with the way we lived. Divorcées were not allowed to go to communion, children born out of wedlock suffered harm (as did their mothers), the clergy had little or nothing inspiring to say from the pulpit. Contraception is still a sin, despite the fact that women must bear these children, often raising them under difficult circumstances. If it’s a choice between saving the infant or the mother, who does she choose when she has four other children at home?

The most difficult part was when I married a former priest and we were not permitted to celebrate our union (neither had been married before). Instead, he was shunned by lifelong friends and fellow clergy. When we decided to have a religious marriage, we were not allowed to invite anyone, and even had to go out of the diocese to do so. Further, our marriage has never been recorded in the official church records. It is buried in the church archives somewhere, never to see the light of day.

When I wrote to our cardinal to tell him that he was dishonoring a very upstanding and dedicated priest, I received a very patronizing letter full of platitudes. I’d told him that if this was the way the church teaches and practices charity, the church wouldn’t have a role in our children’s upbringing.

Whenever I ask questions about my faith of the hierarchy, the response I get is either that “it’s a mystery,” or that “the different writers of the gospels lived many years after the death of Christ.”

Why did Christ wait to descend to earth when humankind had been suffering for so many years? Was He perceived as a life raft in troubled times? Was He a balm and hope to those afflicted? Was it real or imagined?

What happens to those who don’t subscribe to the ‘one true church’?

What has happened to the seven deadly sins? Why is nothing said about them, when they continue to besiege us?

And last, where are the women? Housekeepers, organizers, and now eucharistic ministers—but no bishops or popes? I bet they can run anything better than most men.

Why did I leave? Too many questions, and too few answers. Plus, a personal affront that I have a hard time forgetting.

My roots from the cradle are deeply Catholic, and my worldview remains so. Yet I abjured the institutional church years ago. My sense is that the modern church lost its way when it lost its temporal power in the nineteenth century. In the wake of the push for Italian Unification and the failed nationalist revolutions of 1848, Pope Pius IX responded defensively, first by issuing the Syllabus of Errors and then by calling the First Vatican Council. After that point, the institutional church chose the way of authoritarianism. Despite some attempts, especially in the wake of Vatican II, to infuse its teachings with the findings of modern science and scholarship, the church has been following the same road ever since.

I am a gay woman—who is, if truth be told, a transman. I will return to the institutional church when it accepts that women are fully human, worthy of ordination and full participation in the life of the church at all levels and in all venues; when family planning (including the use of contraceptives following careful discernment) is confirmed as a valid moral decision; when those of us who happen to be gay or transgender are welcomed as children of God, not rejected as “intrinsically disordered,” and allowed to receive the sacrament of marriage under the same conditions as heterosexuals; when Christ’s command that “we love one another” becomes the heart and soul of church teaching; when all human beings—even the gay, the female, and the transgender—are welcomed as full participants in the Mystical Body; when the institutional cChurch abjures its nineteenth-century notions of authority for love.