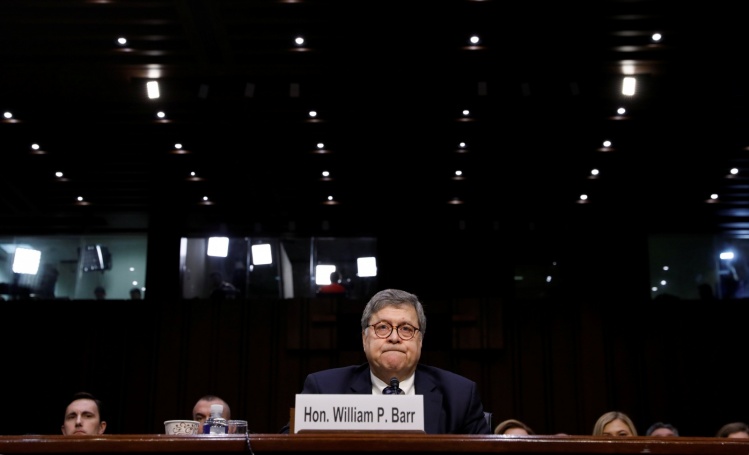 Warning lights should have been flashing early on during William Barr’s confirmation hearings on Tuesday. But our nation’s political class is so eager to think that an establishment figure would never capitulate to President Trump that the moment went by with barely a nod.

Sen. Dianne Feinstein, the ranking member of the Judiciary Committee, asked the would-be attorney general about his June 8, 2018 memo that offered an expansive view of presidential authority. Barr eviscerated what he took to be special counsel Robert Mueller’s interpretation of the obstruction of justice statute.

His focus on Section 1512 of the criminal code surely overjoyed Trump, since Barr asserted that “there is no legal prohibition...against the president acting on a matter in which he has a personal stake.” The attorney general and Department of Justice lawyers, Barr said, citing a 1922 case, are merely the president’s “hand.” Barr added that “the discretion they exercise is the president’s discretion.”

Barr went on to argue that “the Constitution’s grant of law enforcement power to the president is plenary.” Barr used the word “plenary” six times. Merriam-Webster defines it as “absolute, unqualified.”

Barr offered no guarantee that the public would see whatever report Mueller issued.
sharetweet

And there was this shot at former FBI Director James Comey for suspecting corruption when Trump asked him to “see his way clear” to stopping the investigation of the president’s national security adviser Michael Flynn, who has since pled guilty to lying to the FBI.

“The formulation that Comey ‘see his way clear’ explicitly leaves the decision with Comey,” Barr wrote. “Most normal subordinates would not have found these comments obstructive.”

Barr’s entire performance on Tuesday—one heck of a smokescreen—seemed designed to get senators to forget about his memo. Barr spoke effusively about his admiration for Mueller and insisted that he would never interfere with him.

Everyone outside Trump’s orbit wants this to be true since, in our partisan world, Republican senators are expected to fall in line behind Barr. But Feinstein’s question unmasked how disingenuous the nominee’s protestations may have been.

Her simple query: “How do you know what Mueller’s interpretation of [Section] 1512 is?”

Barr’s answer: “I was speculating. I said at the beginning I was writing in the dark, and we are all in the dark. Every lawyer, every talking head, everyone who thinks about or talks about it doesn’t have the facts.”

He was speculating? In the first instance, why should we be comfortable at this fragile moment for our institutions with an attorney-general nominee who would compose a detailed and acerbic nineteen-page assertion of boundless presidential power on the basis of mere speculation? And an attorney general is rather more than a “talking head.”

The memo itself belies his benign reading of his own words. Yes, the second paragraph used the word “appears” about what Mueller was up to, but there was little circumspection in the rest of Barr’s legal torrent.

On Tuesday, Barr could have given substance to his commitment to “allowing the special counsel to complete his work.” But he was persistently evasive and flatly declined to promise steps showing that the Barr of presidential supremacy would not be the same as Barr the attorney general.

He declined to pledge he would recuse himself from the probe if the Justice Department ethics office said he should because of his tendentious memo. On what grounds might he go against the office’s advice? “If I disagreed with it,” he said. A lot of help that was.

He offered no guarantee that the public would see whatever report Mueller issued. If anything, he seemed to tilt toward secrecy when he said the special counsel’s conclusions “will be handled as a confidential document.”

He even defended Trump’s use of the phrase “witch hunt” to refer to the Russia collusion investigation. “If someone felt they were falsely accused, they would view an investigation as something like a witch hunt,” he said. Barr, you see, supports Mueller and the FBI, but has no problem with their being compared to witch hunters.

I understand the will to believe. But any senator who votes to confirm him in the hope that he’ll fight back against Trump’s abuses is choosing to ignore the many red flags Barr waved before us amidst all the smoke.

Can This Campaign Be Constructive?