A Heist of the Heart 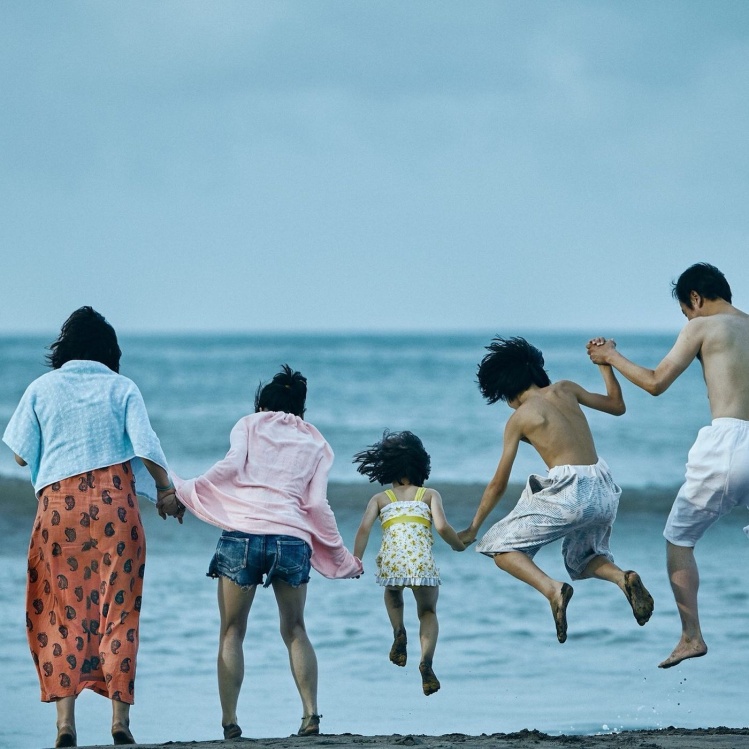 The fifty-six-year-old Japanese director Hirokazu Kore-eda began his career in TV documentaries, and his movies possess a factual straightforwardness offset by qualities that are subtle, elliptical, and quietly poetic. Kore-eda is intensely character- and family-oriented, and his funny-sad dramas contain a lurking potential for sentimentality, which he wards off with pinpoint specificity, and a scrutiny of human fates and foibles that highlights sorrow, duplicity, and neglect.

His films evoke the great Yasujirō Ozu, who tenderly investigated intergenerational family life in quietly luminous 1950s works like Late Spring and Tokyo Story. Kore-eda’s first non-documentary, Maborosi (1995), showed us a young widow, devastated by grief after the accidental death of her husband, and her unlikely path to recovery via an arranged marriage of convenience. Nobody Knows (2004) followed four young children abandoned by their mother and thrown on their own devices for survival. I Wish (2011) portrays two young brothers, separated in a divorce and living in distant cities, who dream obsessively of reuniting. In Like Father, Like Son (2013), a workaholic businessman and his wife discover that their newborn was accidentally switched with another infant in the maternity ward, and must decide what to do. And in Our Little Sister (2015), a trio of twenty-something sisters discover they have a fourteen-year-old half-sister, via their late father’s infidelity, and decide to adopt her.

These summaries suggest the terrain Kore-eda has staked out: the complexities of family life and bonds, the particularities of a child’s view of the world (both physical and moral), and the harsh nature of abandonment. These themes inform his current film, Shoplifters, winner of the Palme d’Or at Cannes. Shoplifters takes up the story of the Shibatas, a family headed by an older father named Osamu (Lily Franky), a cheerful scalawag whose specialty is pilfering. “Whatever’s in a store doesn’t belong to anyone yet,” he tells his twelve-year-old son, Shota, and in the opening scene we watch father and son wander through a supermarket in a practiced routine, the boy slipping items into his backpack as the father blocks the view of an employee. The mood is one of family hijinks and wry complicit humor, a juvenile pleasure in getting away with things. “How much does that cost?” Shota asks when his father mentions a household tool he wants to acquire. “About two thousand yen,” Osamu says, then leans close with a wink. “If you buy it.”

On the way home the two pass an apartment complex where a waif of a girl is wandering about, seemingly abandoned; in an act of impulsive generosity, they bring her home to feed her dinner. “We’re not a foster home,” Osamu’s wife Nobuya says when they arrive. “Could you at least bring something home that would make money?” But the family’s cantankerous grandmother, Hatsue, notices bruises and scars on the girl’s arms, and when Osamu and Nobuya bring her back to the apartment an hour later, they overhear loud domestic strife and the sound of a woman being struck. Nobuya clings to the child protectively, refusing to let her go. Thus do the shoplifters end up snatching a human.

Shoplifters provides a look into Japan’s underclass, struggling on the margins of society, shut out from the default comfort and security of middle-class life. Living off granny’s pension of 60,000 yen a month (about $550), the Shibatas do what they have to do; everyone has a scam. An older daughter, Aki, works as a dirty dancer in a porn store. We see the grandmother stuffing items of clothing into a bag in a department-store dressing room, and later playing slot machines at a casino. The grownups toil at part-time jobs, Osamu as a day laborer in a construction crew, Nobuya in a huge drycleaners (finding a tie-clip in the pocket of a suit jacket, she pockets it with a conspiratorial grin at a coworker). There are funny dinner scenes in the family’s crowded, cluttered flat, everyone loudly slurping noodles as they bicker over the brand of shampoo that Shota has pilfered from the corner store, or over the plight of the little girl, whom they are calling Lin. Eventually she becomes an apprentice in shoplifting, father and son teaching her the tricks of the trade.

Kore-eda is the kind of director who caresses the visual details, lingering on a close-up of the little girl’s bare feet curling around the leg of a chair, or on Shota, clacking a stick along the balusters of a railing. He captures the games children play, hiding behind trees, collecting bugs, gauging cloud shapes in the sky, as well as the ways that adults can be childlike—Osamu blowing air into a plastic shopping bag and playing soccer with it, or Nobuya drinking soda with Shota and belching with gusto, the two dissolving into laughter. The film invites us to take pleasure in the innocuous dailiness of family life and its rituals, like a child throwing a lost tooth up onto the roof with a wish, or seeing the universe in a small blue marble held up to a flashlight. One lovely nighttime scene is shot from above an abandoned lot where Shota is telling his father a story about a school of fish that gang up on a big tuna. The two play a game of catch-me, as Osamu—wearing a walking cast after a workplace injury—lurches about, laughing and trying in vain to catch his son, shouting, “I’m going to eat you all up!” The family struggles, but there’s plenty of tenderness amid the travail.

There is no explicit religious quality to Kore-eda’s vision, but forgiveness, kindness, wonder, and gratitude form its core.
sharetweet

The plot, such as it is, centers on the fate of the little girl, and on the looming question: Will a price have to be paid? And if so, by whom? An undercurrent of worry deepens gradually, then suddenly, as the film reveals darker secrets at the core of the Shibata family’s story. These disclosures are carefully calibrated; we spend the first two-thirds of the film seeing the family from the inside, and only later, when things unravel, do we get the world’s official account. Kore-eda engineers a subtle play of perspectives and narratives, keeping us within the bounds of this enclosed and secretive family, letting us share its rationalizations and self-deceptions—and kindnesses—so that, in a kind of cinematic Stockholm syndrome, we become part of its worldview. We take in the family’s raucous ad hoc happiness and sympathize deeply.

That process sets us up perfectly for the hard denouement, a series of revelations and confessions that alters the film’s tilt and tone, replacing merriment with gravity. Along the way, the aftermath of exposure, with its severe reckonings and shamings, reminds us just how skilled, sensitive, and finely detailed are the portrayals offered by the film’s two lead adult actors. Lily Franky—a veteran of many Kore-eda films—plays Osamu with an utterly convincing air of merry, roguish selfishness. And as Nobuya, Sakura Ando proves nothing short of astonishing. The arc of her character’s undoing is designed to produce maximal catharsis, and it does. The film is a bit of a weepie, but the tears it provokes are well earned.

Shoplifters is not the first time Kore-eda (who also scripted and edited) has explored a Dickensian vision of street urchins and of a family as foragers, doing what they must in order to perdure. The film showcases his deftness at eliciting empathy, creating areas of softness and warmth within a hard and cold world. Scenes of the Shibatas shivering in their underheated apartment in winter, or drenched in sweat in summer, remind us how large weather looms in the lives of people on the margins. Yet such privations do not prevent them from taking pleasure in the same weather, at one point pausing to appreciate the marvel of a sudden thunderstorm on a hot summer day.

There is no explicit religious quality to Kore-eda’s vision, but forgiveness, kindness, wonder, and gratitude form its core. On a family outing to the beach, the frail old grandmother, sitting in a chair, ruefully covers the age spots on her legs with sand, while mumbling to herself about her decrepitude; looking down to where her children and grandchildren are playing in the water, she mouths a silent “Thank you.” As for the family itself, despite its spectacular flaws, when all the duplicities have been sheared off, what remains is the nourishing and redemptive reality of love. In one touching scene, Nobuya and the little girl compare scars: hers, from a hot iron at work; the girl’s, from her abusive parents. Gingerly they touch each other’s wounds. “We’re the same,” Nobuya says quietly. A bit later, she continues: “If they told you they hit you because they loved you, that is a lie. If they really love you, this is what they do.” She holds the child tight, hugging her, and swaying a little. “This is what they do.”

There is a quiet boldness to the way Hirokazu Kore-eda works in this film. Wielding his trademark tools of pathos and whimsy, he pretty much announces he’s out to steal your heart—then tiptoes in and does it anyway. You have to admire a director who can pull off such a brazen heist.