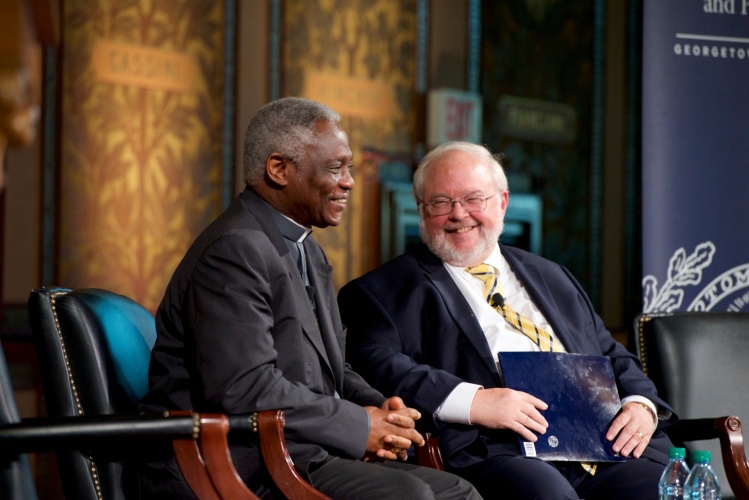 Cardinal Peter Turkson, prefect of the Vatican's Dicastery for the Integral Development of People, and John Carr, director of the Initiative on Catholic Social Thought and Public Life at Georgetown University in May 2017 / CNS photo

Cardinal Peter Turkson stopped off in New York last week to address an environmental conference at the United Nations, where once again he put forward ideas in Pope Francis’s encyclical Laudato si’. About a week earlier, speaking at a gathering at Georgetown University in Washington, he was asked what he’d talk about if he had 15 minutes with President Donald Trump. The answer: greenhouse gas emissions.

The Vatican’s urgency on climate change—Turkson, archbishop-emeritus of Cape Coast, Ghana, is prefect of the Dicastery for Promoting Integral Human Development—stands in contrast to the tepid approach of the great majority of Catholic bishops in the United States.

The U.S. Conference of Catholic Bishops issued the requisite statements before and after Trump decided to pull the United States out of the Paris Agreement. That was done through letters from Bishop Oscar Cantú of Las Cruces, New Mexico, in his role as chairman of the bishops’ Committee on International Justice and Peace. But there was little follow-up by individual bishops at the local level.

Meanwhile, Vatican Secretary of State Cardinal Pietro Parolin urged Trump during his visit to Rome not to withdraw from the Paris accord. At the same time, Bishop Marcelo Sanchez Sorondo, who heads the Pontifical Academy of Sciences, told reporters that if Trump pulled out from the climate agreement, “it would be a huge slap in the face for us” and “a disaster for everyone.” Cardinal Parolin presumably delivered some version of that message to Trump, face to face.

From the start, there have been questions about how vigorously U.S. bishops would apply Francis’s teachings on the climate
sharetweet

From the start, there have been questions about how vigorously Catholic bishops in the United States would apply Pope Francis’s teachings in Laudato si’. New York Times religion writer Laurie Goodstein noted as much even before the release of the eagerly anticipated encyclical. Following the bishops’ spring meeting two years ago, she considered their apparent reluctance to take on a politically charged topic. So did a distinguished observer:

Cardinal Theodore McCarrick, the retired archbishop of Washington, said that at the meeting on Thursday, when the bishops discussed their top priorities for the coming years, “nobody mentioned the environment.” “They don’t understand it. They don’t understand the complexities,” Cardinal McCarrick said of the bishops. He added, “When the encyclical comes out they’ll all get behind it, but they’re waiting to see what’s in it.” Their wariness is one of many signs of the challenges Pope Francis faces with American Catholic leaders, who are more cautious and politically conservative than he seems to be on certain issues.

Some would say the U.S. bishops have shown substantial support for Francis in his stances on climate change and environmental justice. In addition to multiple statements from the relevant USCCB committee chairmen, they have helped to fund the Catholic Climate Covenant and sponsored Laudato si’ pamphlets and discussion guides for use in parishes, among other steps.

But statements issued in Washington—or, for that matter, in Rome—need to be repeated at the local level if they’re going to have much effect. Not only were the statements the U.S. bishops issued rather weak (as Anthony Annett wrote recently in Commonweal), but there is a clear lack of follow-up.

There are some similarities to the bishops’ handling of another fateful presidential decision, George W. Bush’s war in Iraq. Pope John Paul II pushed against that war in 2004, sending a trusted envoy to warn Bush it was a potential disaster. Bishop Wilton Gregory issued a statement on behalf of the sixty-member administrative board of the bishops’ conference urging that Bush “step back from the brink of war,” and provided an analysis based on just-war theory.

But there was little follow-up from bishops in their dioceses, despite efforts of Catholic peace groups, such as local chapters of Pax Christi, to encourage them to speak up. Some bishops essentially supported the war, as did some of their diocesan papers. The Church’s opposition received relatively little attention in the news media, which in turn made it easier for Catholic politicians to ignore.

Speaking out forcefully on entry into the Iraq war or, today, withdrawal from the Paris Agreement, would have inserted a bishop into a whirl of partisan controversy, especially with the social-media madness that now prevails. But the bishops have been willing to take controversial stands on what have to be seen as higher priorities, such as religious freedom and the contraception mandate, or abortion. As Pope Benedict XVI said in 2010, “If we wish to build true peace, how can we separate, or even set at odds, the protection of the environment and the protection of human life, including the life of the unborn?”

With some exceptions, the U.S. bishops have not shown much interest in uniting these concerns. And, as Michael Sean Winters noted recently in National Catholic Reporter, there is a substantial and influential conservative intellectual infrastructure working hard to separate them.

Asked about Trump’s “America first” approach during a visit to Georgetown University last month, Turkson told Catholic News Service, “That’s a language that I think is not useful to speak because it makes the others say, ‘Who are we?'” He said it was the U.S. bishops’ role to respond, and perhaps there was a nudge. As CNS reported: “The Vatican, he said, defers to local bishops’ conferences—in this case the U.S. Conference of Catholic Bishops—to respond if it so chooses. But he said leaders in other countries could question why the U.S. sets itself above others.”

As Turkson said last week at the U.N. in addressing the issue of ocean conservation, “Much of the decline in the health of oceans is a result of emphasizing rights and autonomies to the detriment of personal and national responsibilities.” He added that “care for our common home … is and will always be a moral imperative.”

Pope says he is satisfied with secret report