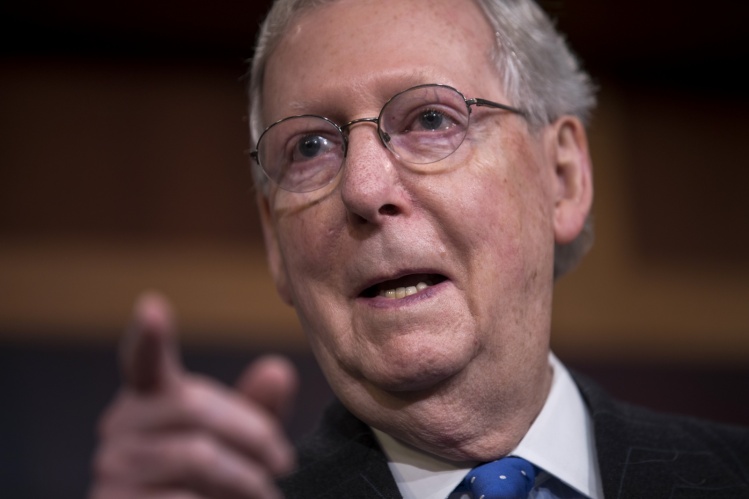 Senate Majority Leader Mitch McConnell: his health-care wrecking squad has to work in the shadows, otherwise the public outcry would be enormous / CNS photo

Senate Majority Leader Mitch McConnell once had passionate views about how carefully Congress should consider sweeping changes to the health care system.

“Fast-tracking a major legislative overhaul such as health care reform or a new national energy tax without the benefit of a full and transparent debate does a disservice to the American people,” McConnell said in 2009, referring to the two big issues of the moment. Democrats using such means, he added, “would make it absolutely clear they intend to carry out their plans on a purely partisan basis.”

Republican hypocrisy is now so rampant that it’s typically ignored or, worse, granted the political class’s all-purpose form of absolution: “Everybody does it.”

But everybody doesn’t do it. McConnell is trying to eviscerate the Affordable Care Act using methods completely at odds with how the law was originally brought to life seven years ago. The ACA was debated for more than a year and went through an elaborate hearing and amendment process, including some changes urged by Republicans.

By contrast, the bill Senate Republicans are writing is being held as close as the nuclear codes. In the meantime, President Trump and his administration (including, most recently, Attorney General Jeff “I don’t recall” Sessions) keep providing McConnell excellent cover as their assorted outrages dominate the news and deflect attention from Capitol Hill. The wrecking squad works in the shadows knowing that if the public were given time to absorb the damage in store for millions of Americans, the pushback would be enormous.

To finance their tax cuts for the rich, Republicans will have to gut insurance for a lot of people one way or another
sharetweet

Cleverly, Senate Republicans say their coverage-destruction bill will be better than the one Speaker Paul Ryan pushed through the House. (Trump helpfully described the House measure as “mean” during a meeting Tuesday with Republican senators.) Well, great, and a Category 4 hurricane is a bit less harrowing than a Category 5. Most of us would prefer to avoid both.

One of the so-called “improvements” that has leaked out: People will be thrown off Medicaid more slowly under McConnellcare than under Ryancare. But they’ll still be thrown off, and to pay for this reprieve, the Senate would reportedly include additional cuts to Medicaid elsewhere. To finance all their tax cuts for the rich, Republicans will have to gut insurance for a lot of people one way or another.

Why all the secrecy? McConnell is trying to keep the pressure off the many Republican senators who have offered pledges of varying degrees of specificity to protect Medicaid and other aspects of the ACA that benefit their constituents.

They include Dean Heller of Nevada and Jeff Flake of Arizona, both up for re-election next year, as well as Rob Portman of Ohio, Shelley Moore Capito of West Virginia, Lisa Murkowski of Alaska, Cory Gardner of Colorado, and Bill Cassidy of Louisiana. So far, Susan Collins of Maine has stood honorably as one of her party’s firmest skeptics of this fiasco-in-the-making, but even she seems to be wobbling.

Since Democrats have forty-eight votes against dismantling the existing law, any three Republican senators could put a stop to this fantastically anti-democratic process. They could walk into McConnell’s office and say they’ll oppose any bill that is not made public for at least a month of real scrutiny and discussion. Is this too much to ask of legislation that could threaten the health care of countless Americans (the exact number being unknowable because the bill’s architects won’t admit to what they’re doing)?

There is work here for activists, politicians, and the media. Activists must understand that they have less time to save the Affordable Care Act than they might think. Democratic Senators must take every opportunity to force this issue to the fore. Disruption in the face of this violation of legislative norms is no vice.

As for the media, Jacob Leibenluft, a former Obama administration official, described the problem well in an interview: “If you don’t have hearings, and you don’t have big moments for television, you don’t have bandwidth for coverage.” Leibenluft, now at the Center on Budget and Policy Priorities, says individual reporters on the health-care beat are doing good work, but their stories are getting limited attention. Leibenluft spoke before the horror of Wednesday’s shooting of Rep. Steve Scalise (R-La.) and four others, which properly commanded the nation’s attention. His point was about the place of health care in the normal flow of political news.

He added: “I hate to think that looking back on this period, we’ll realize that the most regressive piece of social legislation in modern American history was passed, and no one was paying attention.”

We know that the Trump/Russia story will still be there in a month. We cannot say the same about the health insurance millions of Americans count on. By then, it may be on the road to extinction.