For the Truly Poor

By Dorothy Day
From the Archives
Poverty
Social Justice 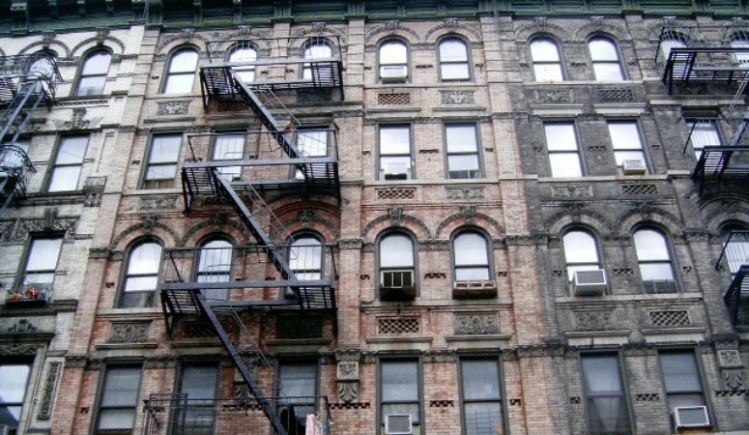 Maria has come in from the country where she has been living for the past years, and we are going out to look for an apartment for her. It is for herself, her two children and husband. Without money they could no longer get along in the country. The city offers Alan a job at $15.00 a week and now the problem is, finding a home. The family of four cannot live on $15.00 a week, you say? Nonsense! With courage and determination, one can do anything. Well, of course, if they are used to it. . . . But they are not. They are used to owning their own home, to having a car, to sending their children to a private school.

But Maria meets problems with a fine spirit and re­ fuses to be defeated.

It is one of those keen, clear January days with a faint warmth in the air—a good day for a brisk walk. Starting south on Avenue A, we face a sharp wind and a dazzling winter sun which hangs low over the houses. It is early, only two o'clock in the afternoon, and it is amazing how much light and sparkle there is in that sun which hangs so low in the sky.

We have no set plan, Maria and I, that is to say, we do not really know where we are going to look. We are just setting out to walk up one street and down another until a likely place presents itself. Nevertheless, I more or less know what I am doing, for I have placed the whole matter in the hands of Saint Joseph. He is a fine one to find a home for you, I tell Maria.

Maria is a Communist, but she is very fond of me, and if I think Saint Joseph is going to guide us, well and good.

He should be especially helpful, I add, since he had so much trouble himself in finding a place for Mary and the Child, and in consideration of the fact that we are modest in our demands, not expecting much more than a stable for the rent we can pay, he will surely guide us.

On 15th Street, just across from the Immaculate Conception Church, there is an empty flat. But though the outside of the building is clean, the inside is not, and the rent is exorbitant. Twenty dollars for four rooms, no heat, no hot water, no bath! Impossible. We are not being finicky, we just know we can do better.

As I say, we had no plan on setting out, but we did intend to confine our researches to one area—that large sprawling part of the East Side, bounded by Williamsburg Bridge on the south, 14th Street on the north, the East River and Avenue A. This is a section apart from subways and elevated trains and accessible only by meandering buses or crosstown cars, which means that to get anywhere you have to pay two fares. But Maria likes to walk and so does Alan, and he can get up a half an hour earlier to make the long crosstown hike and save carfare, and the walking will be enlivening and he won't miss the country so much.

We are finding the walk enlivening ourselves, and as we go, we peer through doorways, looking for backyard houses.

Did you know that all over the East Side there are hidden streets, accessible only through front buildings or obscure alleys, and on these hidden streets there are sometimes stables or little houses or rows of apartment buildings hidden from the world? These are quiet places, away from the noise of the street, away from trucks and taxis and street cars, and often, if the houses in front are high and those in back low, away from sunlight and air too. But sometimes the position is reversed, the houses in back are high and those in front low, and there is apt to be a bargain there.

One such place we found, back of Avenue A. It was a tall, slim back-yard house, four stories high, an apartment to a story, and each apartment renting for $14.00 a month.

But the janitor's husband reeled at us dangerously, and the smell of alcohol sent us fleeing to the street.

We cut over through Tompkins Square, to get to Avenue B, and it was good to feel the spongy earth under foot, though the feel of it brought a nostalgia for the fields.

Down on 8th Street past Avenue C there was an old house (not a back-yard house) facing north and south, with a trampled back yard. But the rooms were large and light and high-ceilinged, the house was a well-built one, and despite the neighborhood, which was teeming with children, one felt the luxury of space and nobly proportioned rooms. There were well­ appointed bathrooms, good electric fixtures, a well-outfitted kitchen. But the rent for this place was too high, $25.00, and the gas bill would bring it up to $35.00, what with the heating of both house and water; and a man getting $15.00 a week cannot afford that, said Maria firmly.

Cutting across Avenue C which is a wide sunny street, we passed the pushcarts piled with artichokes, tomatoes, mushrooms and all kinds of fruits.

"A penny a piece for artichokes," I cried, buying some, "and mushrooms only fifteen a pound. One can always eat anyway."

"We got a letter from our cousin in Russia," Maria said, "and he writes that nowadays when the people talk about America they don't want to hear about our industries or high buildings, but about the food for sale on the pushcarts where all can buy. They say, 'Can you really buy all the bread and butter you can eat? Can you really have fresh fruits and meats? And it is cheap?' It is very sad."

We cut back along 7th Street toward the part where the school children are beginning to gather for play. This street is not as crowded as 11th, 12th or 13th. Those are supposed to be rough streets. Seventh Street has synagogues and women sitting out in the sun with baby carriages. On one side there is a public school. Around the corner on the square is St. Bridget's Church, with a parochial school in back.

We were nearing the corner when we passed a wide passageway leading back to a long irregular-shaped yard where there are a half-dozen five-story buildings. In front, facing the street, the houses are only three stories high.

The son of the Russian janitor, a clean, spectacled student, opens the door to one of the houses and shows us the apartments. There are three rooms, of fair size, all of them light and sunny on the top two floors. The living-room has a fire place and two many-paned windows facing south. The bedroom and kitchen face north and there is a window in each. There is a little toilet off the kitchen. Instead of a wash-tub, the boy says, the landlord will put in a bathtub. There is no heat, no hot water, no electricity, but the rent is only $10.00 a month.

The houses are sordid, grim, and look as though they belong in a Dickens novel. But Maria, who believes in scrubbing with strong yellow soap, is thinking of blue and white check curtains at the windows and her blue rag rugs on the floor.

"Blue, the psychologists say, is a happy color," she says cheerfully, not at all taken aback by the seven years' accumulation of dirt in the apartments, for it is long since they were occupied, the janitor's boy says. "Blue is the color of the sky and the Blessed Virgin's robes."

"If we take the top floor, we can use the roof. There'll be plenty of blue then. Alan can build a fence to make it safe for the children."

Her mind is pretty well made up—Saint Joseph has helped us in our search, for really, the rooms envisaged with fresh paint, curtains, scrubbed floors, rag rugs and children's toys, are not so bad. A clear eye and a courageous spirit has transformed them into a home.

But it is too fine a day not to continue our walk, so we venture further into the depths of the East Side, down to Stanton Street to visit the model tenements of the Lavanburg Foundation. There had been stories in the paper a few weeks ago of the celebration of the fifth year of these model homes, built by the philanthropy, or shall we say, the loving kindness of a Jew, with the cooperation of his Catholic partner, two of whose sons are still on the board of trustees. Here there are roof gardens and basement club rooms, a kindergarten, and community activities. But the rents are $30.00 for three rooms, $34.00 for four rooms, and $42.00 for five rooms, low rents it is true, but too much for working people these days, when fathers of families are working half or full time for $10.00 and $15.00 a week and glad even of that to hold body and soul together.

"What should be done," said Maria, "is this. Landlords with the cooperativeness or sense of duty or whatever you want to call it, of Mr. Lavanburg, should take their old houses where the poor are still forced to live because they can't pay more than $10.00, $15.00 or $18.00 a month, and utilize the basements and roofs. There could be mothers' and fathers' clubs, and children's play clubs to meet in basement rooms for their activities. Community spirit and cooperation would be fostered. And the roofs could be made into playgrounds where they could gather together in summer instead of on crowded front stoops and garbage filled streets, where the children are in continual danger. It wouldn't take much to make these reforms: only a landlord who has a social conscience and a few tenants who would cooperate and get things started. You don't have to have a million to do it. You don't have to have steam-heat and hot water. The poor are used to hardship. Small beginnings," she ruminated, as we walked back through dusky lamp-lit streets, for it was now five o'clock and twilight was upon us. "The roof playground first. . . . We'll see what we can do. . . ."

The House on Mott Street