By Dorothy Day
U.S. Catholicism
Commonweal at 90
Death and Dying
Farewell
From the Archives
Social Justice
Women in the Church 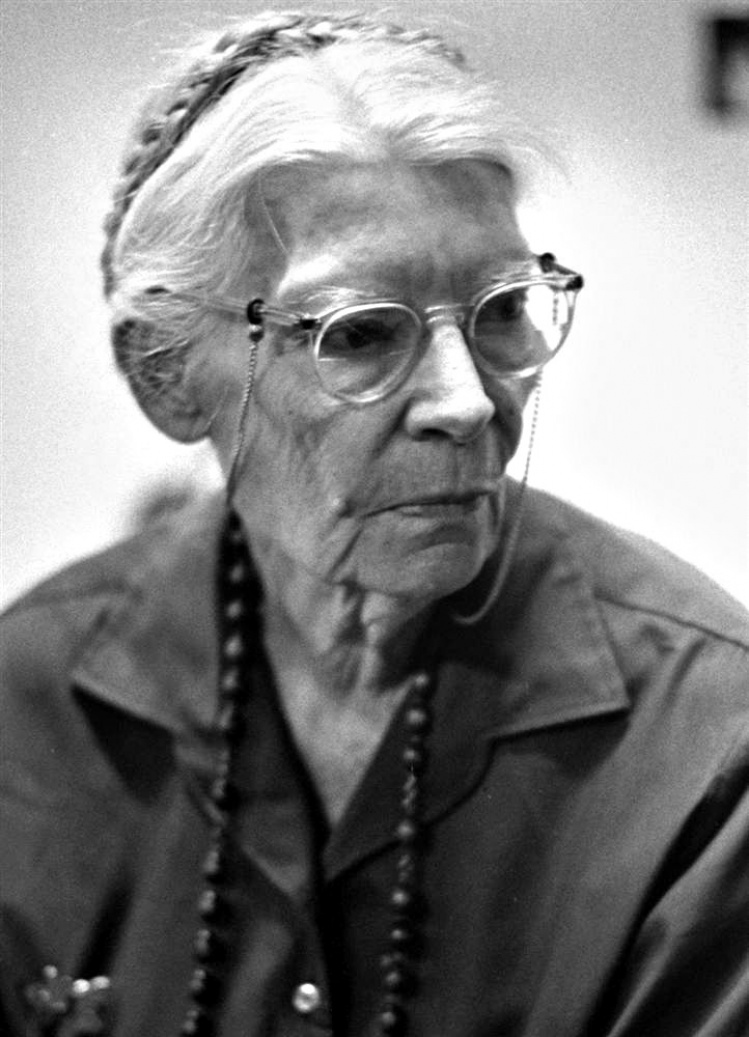 Dorothy Day, co-founder of the Catholic Worker movement, wrote her first article for Commonweal in September of 1929. To mark her 75th birthday, the editors recently asked her for an article of reminiscence and recollection. Her response follows.

I hope you do not mind my responding to your request for a short "reminiscence" by writing you a rather disjointed letter. I am inspired today by a great sense of happiness and gratitude to God and to Commonweal too and a desire to share it. I wonder how many people realize the loneliness of the convert. I don't know whether I conveyed that in my book The Long Loneliness. I wrote in my book about giving up a lover. But it meant also giving up a whole society of friends and fellow workers. It was such a betrayal of them, they thought. One who had yearned to walk in the footsteps of a Mother Jones and an Emma Goldman seemingly had turned her back on the entire radical movement and sought shelter in that great, corrupt Holy Roman Catholic Church, right hand of the Oppressor, the State, rich and heartless, a traitor to her beginnings, her Founder, etc.

Anatole France introduced me to the Desert Fathers in his book Thais, and even in that satire the beauty of the saints shone through. George Eliot introduced me to the mystics. Her Maggie Tulliver read the Imitation, so I read it too, regardless of the fact that George Eliot rejected formal religion. Did you know that Tolstoi has Pierre read the Imitation after his duel with his wife's lover? That Gandhi and Vinoba have read the Imitation? And Pope John? It still nourishes me. I'm tired of hearing eminent theologians disparagingly quote that line, "I never go out into the company of men without coming back less a man." But how much idle talk in all our lives, dishonesty, equivocation, and so forth sullying each precious day! I go down on my knees each night and say "Dear Father, Jesus told us you were Our Father, repair these slips, mistakes, even sins I have committed with my tongue during this day the discouraging word, the biting criticism, etc." Even this article.

Of course 'my bitterness was most bitter' over and over again, not at Holy Mother the Church but at the human element in it. But thank God, there were always the Saints. When I visited Cuba and recalled Fr. Las Casas and all he was reputed to have done for the Indians, a Communist friend said grimly, "Yes, but as a landowner which he originally was, he introduced African slavery because the Indians died under the hard work, and besides he liked them better than the Africans."

I looked at the biography of Las Casas in the Catholic Encyclopedia and found that there was quite a bit of truth in that.

God forgive us the sins of our youth! But as Zachariah sang out, "We have knowledge of salvation through forgiveness of our sins." I don't think anyone recognizes the comfort of this text better than I do. I have not yet been attracted by the present tendency to bring everything out into the light of day by public and published confessions. Were we not taught by Holy Mother Church to respect the modesty of the confessional? Or is that a silly expression? But oh the joy of knowing that you can always go there and be forgiven seventy times seven times. (Even though you wonder, in your distrust of yourself, whether you really mean or have the strength to "amend your life.") I hope your readers can read between the lines from the above and recognize what my positions on birth control and abortion are.

When I visited Australia (where there is a Catholic Worker paper, a House of Hospitality and a farming commune of families) newspaper reporters on my arrival in Melbourne and Sydney asked me what was my position on the Berrigans, birth control and abortion. My answer was simplistic. I followed Pope Paul. As to the Berrigans, I did not know what the Pope’s attitude was, but I was a follower of Gandhi and Vinoba Bhave and in spite of the Berrigans innocently destructive tendencies, loved them both.

Thank God we have a Pope Paul who upholds respect for life, an ideal so lofty, so high, so important even when it seems he has the whole Catholic world against him. Peter Maurin always held before our eyes a vision of the new man, the new social order as being possible, by God's grace, here and now, and he so fully lived the life of voluntary poverty and manual labor and he spent so much time in silence, and an hour a day in church, besides daily Mass and Communion (while he was in the city), that all who knew him revered and loved him as the leader and inspirer of the Catholic Worker movement. As for me, I am so much a woman, that I am the housekeeper of the Catholic Worker movement. And I am a journalist and well trained in that, what with a father and three brothers, all of whom were journalists.

To get down to my gratitude to Commonweal which helped to train me in my journalistic career. George Shuster, of Commonweal in 1932, sent Peter Maurin to me. Not only that, whenever the Catholic Worker appealed for help the Commonweal Staff (I could not name all that contributed to us), not only sent money and clothes. They even shared their yearly retreats which they used to make at Portsmouth Priory when they invited some of our crowd, editor or a Bowery resident.

Peter Maurin used to bring some of our brilliant young men, like John Cogley, to visit the editors of Commonweal. He told me that John should be an editor of Commonweal someday. Peter thought of the Catholic Worker as a school always and when he started having nightly meetings those first years, Commonweal helped provide speakers, besides building up our prestige so that we got many famous men over the years. Space forbids listing them.

Peter was delighted when people praised him and even seemed to boast of the college presidents who listened to him. He thought prestige helped the work. "We need to build up the prestige of these young men," he said to me and he himself did it to such an extent that many a time he was foolhardy in his trust and estimate of others.

I must illustrate my own explanation of why I have accepted the awards that have been accorded to me in the past few years, by a little story. This is called "reminiscing" and serves to remind people that I am very, very old, as one of my grandchildren said to me once. She said it as she handed me a crude drawing of a ten-tiered, high-riser birthday cake, "because you are very, very old," she had printed underneath, "and have nine grandchildren to eat that cake," she neglected to add.

The story is this. A girl called Katey Smith way back in '34 was sent us by St. Vincent's hospital; she had been operated on for tumor of the brain. (She recovered.) She loved to join in all our activities and accompanied us on a picketing expedition one day on 34th Street in front of the Mexican Consulate because renewed persecution of the Church had broken out. A passerby asked her what the picket line was about and she answered, "None of your damn business."

I would feel like Katey Smith if I refused some of the honors offered me, honors which call attention to and pay tribute to Peter Maurin's ideas. I have refused honorary degrees because of my respect for Holy Wisdom, just as much as for my abhorrence of our military-industrial-agricultural-educational-complex-conglomerate. I compromised when I accepted the Laetare medal from Notre Dame this year. Fr. Hesburgh threatened to come to First Street and present it there if I did not come to the midwest. At the Notre Dame graduation and conferral of degrees, a dozen or so honorary ones, I could be lost in the crowd, I thought. So I accepted and could acknowledge my debts of gratitude to George Shuster, who is assistant to the president, and Julian Pleasants and Norrie Merdzinsky who with various Holy Cross Fathers and Brothers and students kept a House of Hospitality going in South Bend for some years. The Pleasants, the Ryans, the Geisslers, the McKiernans and others kept the idea of communal rural living, and intellectual work and manual labor alive all these years; and William Storey, a professor at Notre Dame who has fed my spiritual life for many years by his set of books—Days of the Lord, excerpts from which gave me the energy this morning to sit down and write this very imperfect letter of thanks to my friends.

I write this from my place of semi-retirement at Tivoli, New York. The spirit of youth today rejects our old names, Maryfarm and St. Joseph's House, but still keeps the name "Catholic Worker Farm." It is not the kind of farming commune or agronomic university Peter Maurin envisaged, but we can boast that whereas the average age of most "communes" in the U.S. today, according to statistics (Stanley Vishnewski says), is nine months (if you know better, write to him), our own Commune has lasted thirty-eight years. The first farm was started in 1934, and there are still old-timers here, John Filliger, Hans Tunnesen, Stanley Vishnewski, Marge Hughes, Slim, etc. The latter three arriving when they were seventeen. Fidelity, constancy, are beautiful words, but we must confess there is much plain stubbornness and very real poverty, even destitution, which holds us together too.

Thank you for your patience. If you don't want this letter-article, send it back and I will use or expand on it for my next "On Pilgrimage" column in the Catholic Worker. Fr. Clarence Duffy who was with us during the war years used to do the like. If we cut paragraphs from one of his articles, he used to gather them together from the wastepaper basket and paste them into his next article.

Love and gratitude to all of you always,

Tags
U.S. Catholicism
Commonweal at 90
Death and Dying
Farewell
From the Archives
Social Justice
Women in the Church