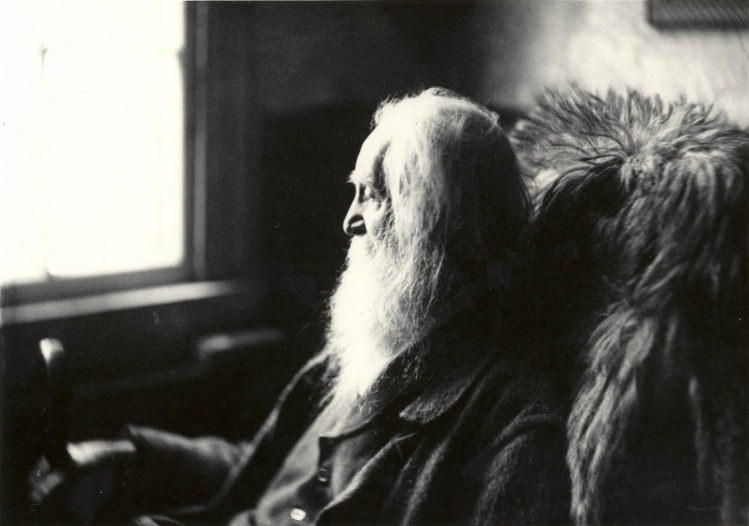 Walt Whitman at his home in Camden, NJ (Wikimedia Commons)

This article originally appeared in the May 22, 1981 issue of Commonweal

ONLY ONCE did I meet the great Chilean poet Pablo Neruda. I had gone to his home where we both began discussing literature extensively. Gradually I noticed that on the desk in Neruda’s study there was a bust of Walt Whitman, and in fact, this was the only bust of a writer in Neruda’s home. So I asked him, “Have you been influenced greatly by Whitman?”

“Whitman has been my greatest teacher,” he replied, “and I, myself, am a direct disciple of his.”

Whitman’s influence over Neruda was not unique because the nineteenth century American poet has influenced all Spanish-American poets, and I believe all of them owe something to Whitman. And that he continues to exercise influence, more than other poets, on all of world literature.

Myself, I wrote my book Fervor de Buenos Aires under the direct influence of Walt Whitman and wrote that in the book’s prologue. In my opinion, Whitman is the father of all that is modern in poetry.

From that moment in 1855 when he published his Leaves of Grass and invented blank verse—based on the Psalms, of course, but very different from them—from that moment, the poetic personage has become one of the greatest feats of the North Americans and their literature. Inspired by experiences in the bedrooms of New Orleans and on Georgian battlefields it has been essential for the literatures of every continent.

The literary destiny of Whitman’s followers has been, above all else, to imitate the results of his work, that somewhat popular poetry, that tone that causes him to be less a poet than an orator. But no one has thought about the intimate aspects of Whitman’s experiment. That dream of democracy, what Americans call “the American dream,” was the great dream of Whitman, who believed fervently in the possibility of that experiment. He was a great partisan of democracy and he wanted the hero of his poem to be everyone.

Now then, there was always a hero in epic poetry; Vergil said, “I sing of arms, deeds, and the man”; that is to say, a man is chosen and exalted. Heroes like Achilles, Ulysses, Roland, and El Cid are some examples.

Everyone was the hero of Whitman’s poem since he wrote it in relation to democracy, in relation to an ideal of equality among all men on earth. He invented a personage whom he called “Walt Whitman” who was not the one offered to us by his biographers; a lonely, unhappy man who led a sad life. Instead the other Whitman, the Whitman of the poem, is a sort of magnificent vagabond who travels from no man’s land to the land of everyone.

Does that mean, then, that there are two Whitmans, the friendly savage and the poor, solitary writer, who invented him?

It is a song of joy because, unlike Baudelaire and Byron who dramatized their unhappiness in famous volumes, Whitman dramatized his happiness.
sharetweet

There is more than duality, there is a trinity of Whitmans. In the first place he is the newspaperman of the Brooklyn Eagle. Then he becomes the exalted personage in the poem, “Walt Whitman, a cosmos, son of Manhattan, turbulent, carnal, sensual, eating, drinking, engendering.” And finally, the third personage is the reader himself which is why when we read Leaves of Grass we identify ourselves immediately with him.

Now then, the idea of creating a trinity one of whose parts is the reader himself, is an idea that only Whitman has attempted and that no one has thought of imitating, Whitman’s style, his intonation, and literary methods have been imitated by Neruda, Carl Sandburg, Lee Masters, and others. But none of them created a personage who would be the author and the reader at the same time. Of course, perhaps only a genius such as Whitman could achieve it, and when one reads Whitman, one immediately understands that he is truly in the presence of a genius.

The democratic personage invented by him is marvelous; one feels that the one who speaks isn’t Whitman but the reader himself. In the poem “Salut de Monde,” for example, he says, “What do you see, Walt Whitman? What do you hear, Walt Whitman?” And among the things he sees is the cowboy crossing the plains with a lasso on his arm, that is to say, he sees “us,” his nineteenth century American audience, in some way. And Whitman also speaks to the one who will read him a hundred years from now, and he imagines that the one who reads him would have wanted to be with him personally, and so he says, “And in all likelihood we are together, you and I.”

“These are, in truth, the thoughts of all men, in all places, and at all times,” sings Whitman, and Leaves of Grass is the song of a great individual who is of and belongs to all people, men and women. It is a song of joy because, unlike Baudelaire and Byron who dramatized their unhappiness in famous volumes, Whitman dramatized his happiness. And when Whitman achieves beauty, he achieves it as no else does: “I am man,” he says, “I suffered, I was there.” What beauty! Those verses fall like hammer blows.

NOW, DOES Whitman’s poetry, more than a literary attitude, represent a form of expression of humanistic-religious truth?

Yes, because there is a mystical feeling evident in his poetry, an experience which supposedly corresponded with his stay in the South. Because whatever it was—the love for a woman, an erotic experience that for him was mystical, perhaps—afterwards he changed radically. Whitman until then was a mediocre journalist who had written a novel against alcoholism and partisan political articles including, strangely enough, a tract in support of slavery. He was, as can be seen, just a journalist. But then he traveled to the South, I think he lived there a couple of years, and returned to New York where he wrote Leaves of Grass which changed everything.

He sent a copy to Emerson, who was already famous, and Emerson answered him with a very generous letter saying that Leaves of Grass was the greatest work of intelligence and wisdom that America had so far contributed. And Emerson continued, “I travel little to New York, but when I do go I shall not miss the occasion to shake the hand of my benefactor.”

With Whitman we think, as I said before, of an orator of joy, and so the great North American poet has become overwhelmed by his creation.
sharetweet

And I, too, agree with Emerson because I think that Walt Whitman is a benefactor of all mankind.

Of course he wasn’t America’s only genius at that time because Poe, to whom we also owe so much, was a contemporary of Whitman. Poe and Whitman didn’t know each other and I think it was better that way. They surely would not have been able to get along. They were opposites.

Poe died without knowing Whitman’s poetry but he would have surely thought Whitman’s poetry was written in blank verse because Whitman was very stupid and could not write in classical verse form. And as for the themes, they, too, would have been distasteful to him: the theme of democracy and common everyday life no doubt would have seemed repulsive to Poe.

Whitman, on the other hand, never understood Poe either. He knew Poe through his works, and when the latter died, he was somewhat unjust to him. Whitman published an article saying that Poe was good, but that he was like a pianist who struck only the most majestic notes without portraying North American democracy. This Poe never proposed to do, since he was at heart a rather dissolute aristocrat and a great romantic.

But perhaps the great difference between Poe and Whitman or, for that matter, Whitman and many other poets and writers, is that the debt we owe Poe is due more to his total image than to any story. When we think of Byron, for example, we think less about “Don Juan” or “Childe Harold” than we do about his person. And when we think of Poe we think of his person, that kind of macabre dandy.

With Whitman we think, as I said before, of an orator of joy, and so the great North American poet has become overwhelmed by his creation. His experiment with the trinity of personage in Leaves of Grass was so successful that his own person has been obscured; the vision of a lonely, unfortunate man whose life was short of happiness has been replaced by a species of semi-divine hero espousing democracy. And it has been Whitman’s successful leap into his songs, the recreation of “Walt Whitman,” that makes his Leaves of Grass the poetry of genius.

JORGE LUIS BORGES was an Argentine poet, critic, and short story writer. The above article was transcribed and translated by Inter-American News Services, Inc.