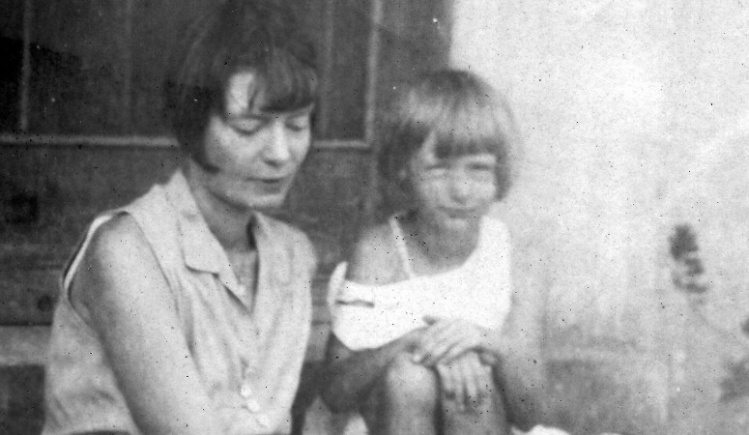 Dorothy Day with Tamar, the child whose birth brought Dorothy into the Catholic Church.

This is a beautifully written, deeply revealing, and spiritually insightful book; and I can’t begrudge the author for an instant that it is mistitled. It should be called Dorothy and Tamar and subtitled An Intimate Portrait of My Mother and Grandmother.

Kate Hennessy is the youngest of nine children of Tamar and David Hennessy. Tamar was of course the daughter of Dorothy Day, the child whose birth, so memorably related in The Long Loneliness, Dorothy’s autobiography, brought Dorothy into the Catholic Church.

That turn to faith, and in particular to Catholic faith, drove a wedge between Dorothy and Tamar’s father, Forster Batterham. It also led Dorothy, inspired by the itinerant French peasant philosopher Peter Maurin, to found the Catholic Worker movement.

As far back as 1952, Dwight Macdonald declared Dorothy “a secular saint” in a New Yorker profile, and now she is a candidate for official Catholic sainthood, too, one of four American spiritual exemplars invoked by Pope Francis before the U.S. Congress. There are things in this book that could jar anyone still inhabiting the traditional world of hagiography. For those who live in the real world, they will only strengthen the cause.

It is a measure of the complexity of life, of the workings of the Spirit, and of family dynamics that many decades after Tamar’s birth propelled Dorothy to the baptismal font, the adult daughter, in an especially bitter moment, could declare, “One of my greatest accomplishments is that none of my children is a practicing Catholic.”

Be assured, this book is the furthest thing from a “Mommy Dearest” exposé. It is a tale sensitively, lovingly told, a tale not just of the Dorothy-Tamar dyad but of all the families to which they belonged—the Days, the Hennessys, the Batterhams, and above all the Catholic Worker.

Tamar treasured growing up in the Catholic Worker family. In the movement’s Houses of Hospitality, she learned receptiveness to the down, the out, and the eccentric. She also suffered chaos, lack of privacy, and competition for her mother’s attention and energy. Not surprisingly, Tamar became a recruit for Peter Maurin’s “Green Revolution,” that hope-filled but frequently calamity-ridden effort at creating back-to-the-land communities.

Echoing Dorothy’s own prose, her granddaughter captures the beauty of nature in all its specificity
sharetweet

Love of the land was a constant in Tamar’s life. It was manifest in the persistent interest in biology that she inherited from her father and in an array of skills—planting, nurturing, spinning, and weaving—essential for living directly from the fruits, vegetables, and animals of country life.  Although Dorothy, too, reveled in nature and helped out at all the Hennessy hardscrabble farms, she was by comparison an urban creature.

This difference overlapped far graver ones. Tamar’s education was fitful—or rather Dorothy’s decisions about it were. Tamar was in and out of schools; Dorothy, struggling with the demands of speaking, writing, and adjudicating Catholic Worker squabbles, oscillated between wanting her daughter tucked safely away and wanting her very close. Dorothy never seems to have got a fix on Tamar’s intelligence or vocational potential. The Catholic Worker proved better at welcoming those fleeing the contemporary world it challenged than at guiding anyone yet to negotiate it.

Adolescence is never the easiest time in parent-child relationships. Tamar’s coincided with one of the most problematic phases in Catholic Worker history. Dorothy become a devotee of Father John Hugo and the harsh, Jansenist outlook he preached in retreats that she urged on the entire movement. Tamar’s bid for independence from this joyless moralism—and from her mother—spurred her toward marrying, at age eighteen, a man ten years her senior.  David Hennessy was devout, bookish, voluble, and enamored of the distributist back-to-the-land movement, unfortunately more out of cerebral idealism than any agrarian skills or instincts. He was also alcoholic, generally unemployed, and given to tyrannizing Tamar and to jealous rages at Dorothy and the whole Catholic Worker movement. “Within weeks of the wedding, I knew I had made a terrible mistake,” Tamar told her daughter long after the marriage ended. Which happened after nine children, one miscarriage, and years of strife and isolation.

Dorothy had always tried to strengthen Tamar’s commitment to Catholic teachings on marriage, but when the end came—David had put himself in a psychiatric hospital—Dorothy said simply,  “I don’t know how you stood it for so long.”  “With that,” Tamar much later told her daughter, “I forgave Dorothy everything.”

Much that Kate Hennessy relates about her grandmother’s early life and the triumphs and travails of the Catholic Worker movement will be familiar to longtime readers of the monthly Catholic Worker newspaper and the many books by and about Dorothy Day. But at each stage Hennessy adds fresh episodes, details, and anecdotes, invaluable for future histories of the Catholic Worker. Her personal accounts of the deaths of Peter Maurin, Dorothy, Forster, Tamar, and stalwarts of the movement like Stanley Vishnewski are full and deeply moving.

Hennessy has drawn on Dorothy’s many books and Catholic Worker columns, on the rich existing literature about her grandmother and the Worker, on many interviews, and on years of fragmentary, guarded, sometimes enigmatic conversations with Tamar. Hennessy uses the long-sealed correspondence showing, contrary to the impression left in The Long Loneliness, Dorothy’s continuing love and longing for Forster. She has mined the decades of Dorothy’s diaries, only published in 2008, for facts and insights into her family’s web of complex relationships.

Perhaps most remarkably, cued only by a puzzling remark from her mother, Hennessy searches for the seeds of what destroyed her father’s mental stability and her parents’ marriage. She discovers in his early diaries entries describing a passion for a fellow worker, a man, and, along with pleas to God and the Blessed Virgin for forgiveness, the beginnings of David Hennessy’s bouts of drinking, depression, and anger, his self-hatred and his fierce, conflicted retreat into religion. She ends this brave chapter with a somewhat anachronistic swipe at the church for holding beliefs that in fact virtually the whole culture then held—but also with an appropriate quote from St. Teresa of Avila: “God cannot rest in an unquiet heart.”

Of Dorothy Day’s oft-repeated quotations from Dostoyevsky, Kate Hennessy writes that none gives her more hope than the declaration, attributed to Prince Myshkin in The Idiot, that the world will be saved by beauty. Hennessy reports Dorothy as saying, “I’d like to come back as an opera singer. Then I could bring beauty into people’s lives rather than tell them what’s wrong with the world.” Though bearing Prince Myshkin’s statement for a subtitle, Hennessy’s book does not argue for it as much as exemplify it.

Echoing Dorothy’s own prose, her granddaughter captures the beauty of nature in all its specificity, flowers, birds, beach life, sea creatures, garden vegetables. Her eye for the concrete extends to houses, furnished rooms, makes, shapes, and shakes of Worker automobiles. She writes of her family’s rambling Vermont farmhouse “with its peeling white clapboards and surrounded by burdock, ragweed, and junk cars rusting under the butternut trees. And the insides always verging on squalor, a wreck of battered furniture and indifferent housekeeping, but crammed full of all that delighted Tamar—looms, spinning wheels, wool, and books, thousands of them filling every wall and hall possible.”

She details sums paid for farms, dwellings, cars, and how the money was raised, perhaps the residue of the Catholic Worker ethos or more likely the realities of a family always on the financial edge, occasionally on public assistance. That the world will be saved by beauty is not, however, a self-evident claim, once one gets beyond sunsets and spring buds, especially for Christians who see salvation in the ugly brutality of the cross.

Hennessy is certainly no sentimentalist. Her portraits abundantly demonstrate the truth of that other favorite quotation Dorothy took from Dostoyevsky, Father Zosima’s warning in The Brothers Karamazov: “Love in action is a harsh and dreadful thing compared to love in dreams.” Hennessy does not avoid the harsh and dreadful, seasoning it with the beautiful and the wisely comic, for example, Stanley Vishnevski’s observation: “There are the saints and the martyrs. The martyrs are the ones who live with the saints.”

“So here I am,” Hennessy writes, still grieving for her mother and grandmother and the shadows between them, but “led by the only thing that matters, the only thing worth writing about—love.”