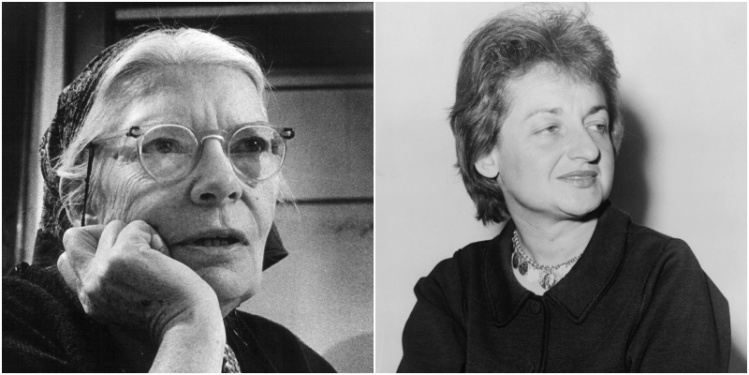 Editor’s Note: Doris Grumbach, a longtime contributor to Commonweal and author of fourteen books, died on November 4 at the age of 104. For nearly thirty years, Grumbach wrote extensively and fearlessly in these pages about motherhood, marriage, feminism, literature, and the Catholic Church. To mark her passing, we’re republishing her December 11, 1970 article—a report on what is surely the only conference in history to have featured both Betty Friedan and Dorothy Day.

She is seventy-two years old, slightly stooped, and her scanty, yellow-white braid is wound about her head in the same way it always has been. Her eyes are red-rimmed from straining to see and sometimes tear-filled from disappointment at what is being said, and her head turns slightly as she strains to hear. She wears a blue wool suit whose skirt reaches her calves. Her cane is on the floor under her seat. All around her are seated sprightly, smartly suited nuns and laywomen and men with elegant hairstyles, and nattily dressed priests. There are 250 persons in this room whose windows look out over the hills of Garrison, New York, waiting, laughing, greeting each other, mostly on the young side, fresh faced and white, prosperous and well fed, and she seems an island among them, silent and eternal. A few well-pressed Graymoor priests hover around the edges of the meeting. The craggy-faced lady waits for the speakers to arrive. She is here to listen to a description of a new battle, alter the long loneliness of all her other battles during more than fifty years of her life. Her name is Dorothy Day. She is perhaps the oldest person in the room, the most personally courageous, in action and practice already the most liberated.

The conference was to be interconfessional, and to a small extent it was. A large majority of the participants were Catholic, but on the first afternoon the two speakers—Dr. Jaroslav Pelikan of Yale and Betty Friedan of NOW—were not. Except for Dr. Pelikan, all the speakers on both days were women, and women were the major portion of the listening and participating audience. Everyone there was, a priori, dedicated to the proposition that the position of women in the world and in the Church was now untenable. They were there to establish this conviction historically and with contemporary reference. So the temper of the gathering, to start with, was uniform and united.

Dr. Pelikan started by sounding some solid scholarly notes. He described Eve and Mary’s images as the defining ones for women’s role in the Church. Eve who was created second and sinned first becomes the basis of the theological theory of women’s inferiority, and Mary is the model of perfect obedience: “Be it done unto me.” Dr. Pelikan discounted the view that under Christ and early Christianity there was a period of equality for women, to be disturbed by the great villain of the woman-place, St. Paul; not at all, he said, the evidence seems to indicate that the Church historically “has always adjusted to the contemporary situation,” which is to say, has reflected in its theory and practices the way society at the time regarded women, and then found theological justification for it. In reply to a query he proceeded to delight his audience by his ability to quote the title of John Knox’s treatise, “A Trumpet Blast Against the Monstrous Legion of Women,” and by pointing out that the discovery of the doctrine of evolution has enabled Christian doctrine to articulate a view of the action of God in the world that fulfills the deepest insights of the biblical story.

Betty Friedan was humorous, fluent, off-the-cuff, challenging. She said the things she has been saying and writing in and since The Feminine Mystique. More intelligent than the TV coverage has ever shown her to be (“The media enjoy all the jokes about bra-burning in order to avoid taking the issue seriously”), she used a shotgun approach to the central issue: every institution of Western society has been structured for the supremacy of men. Women have never been seen as human persons, a situation to be remedied only by restructuring those institutions (including the Church).

Mrs. Friedan described what she thought the direction of the present revolution in women’s rights would take. Motherhood will no longer be the defining factor in women’s lives; women, by virtue of the technological revolution, will lose their household-chore function; as a result of media publicity for all kinds of social revolutions, women will begin to apply “revolution” to their own condition (“she will no longer, by virtue of her sex, be an invisible person”); the character of their revolution will not be a bedroom war, and not a joke, and it will end only when women, with the help of men, are able to effect a change in society; no longer will questions concerning the bodies of women be determined by men, politicians, priests, governors, representatives of the state.

Most important, and after all “the foolishness of making rag dolls out of dish-towels to sell to one another and the cooking of church suppers” are behind them, women will get down to the business of freedom for both sexes, for the present hostility between the sexes, Mrs. Friedan felt sure, is caused by the impotent rage, the dehumanizing sexual repression of women and the equally dehumanizing necessity men feel to be Hemingway-males, to assert and prove their supremacy.

The question of the future, she concluded, is not “Is God dead?” but instead, “Is God He?”
sharetweet

The question of the future, she concluded, is not “Is God dead?” but instead, “Is God He?” The audience, ready for much of the widespread buckshot of the rest of her talk, gasped at this.

At the back of the long room a young mother nursed her baby who cried weakly every now and then. Relieved to be out of their seats, the audience adjourned to the Agape meal, where an ordained lady minister addressed God as “Father and Mother.” The evening was full of constituent participation, and groups were formed to discuss subjects allied to the basic concern of women’s liberation. It ended when Sally Cunneen called for a show of hands on the question of ordained women priests. The vote: 220 in favor, 20 opposed. And then the two sexes and several religious denominations resolved whatever differences remained at a long cocktail party in the friary.

Next morning started spiritually with a Taizé Morning Service conducted by an ordained minister of the female sex who spoke of “the priesthood of all believers,” and a Mass concelebrated by seven priests, all male. Cynthia Wedel, first woman president of the National Council of the Churches of Christ, spoke with calm, dispassionate rhetoric of the ordained woman today, of her problem in obtaining posts with major parishes in the United States. She noted that such women are, however, beginning to serve campus and urban ministries and to teach in seminaries. She noted that the Churches in the Catholic tradition (Roman, Anglican) are the slowest to move in the direction of ordaining women, but said she was certain “no one can put the lid back on the change-process now going on in the Churches.” Ordination for women, she suggested, is certain to be part of this, especially in the light of the death of all-purpose ministries and the beginnings of multiple-service ministries.

The meeting concluded with a rousing panel of “representative” women. A young Black activist, Joyce Richardson, noting that at present the women’s liberation movement is composed of “privileged” women, hoped that it would go on to have some real impact on the rest of womankind. She stunned the polite listeners by reading “The Bitch Manifesto” which calls upon women to accept the designation with all its associated descriptions and characteristics and to be proud of it. “You may not like this new woman,” she said to the world of men, “but you cannot any longer ignore her.”

Sr. Mary Luke Tobin, more gentle in approach but no less forthright, described the future of women in religious life, writing their own rules, moving from institutional to communal forms of life, in every sense determining their own lifestyle. She saw the plight of women in the world as being in some way their own fault, and thought the role of religious women might well be “to inspire women with enough courage to face their problems.”

Sidney Callahan sounded the last trumpet blast, from a woman who had, by good fortune and great ability, achieved what she thought she wanted quite early, “has had it all,” was “free,” financially secure, had a career, a family. Her problem now, she said ruefully, is to determine what to do with her freedom, the problem she expects many women will be faced with in the future, and she looks to some kind of community of friends and family in which she can “live the good life” and “serve.” Hers was the only voice which indicated the ambivalence in the great questions of women’s liberation; she brought down the house with the story of her son (one of six) who asked her, quite seriously, “What do you want to be when you grow up?”

Dorothy Day was the last speaker. She said nothing about women’s liberation, never mentioned the words, never stated her views on the subjects of economic equality, careers, chores, society’s institutions. Instead she reminisced about her life, her daughter, the families she’s known, the poor, the work she’d done, in jail, in the streets, in her Houses. If you tried you could remember, lurking behind her memories, the sentences from her autobiography:

I again went to Washington to picket the White House with the suffragists.... The man I loved, with whom I entered into a common-law marriage, was an anarchist…he had always rebelled against the institution of the family and the tyranny of love.... Yes, we have lived with the poor, with the workers…the unemployed, the sick.... We have all known the long loneliness and we have learned that the only solution is love and that love comes with community.

So it went, in mid-November, 1970, at a meeting for women’s liberation in the Church.

Published in the January 2023 issue:
View Contents
Tags
From the Archives
Gender
Women in the Church 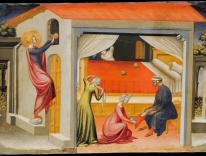