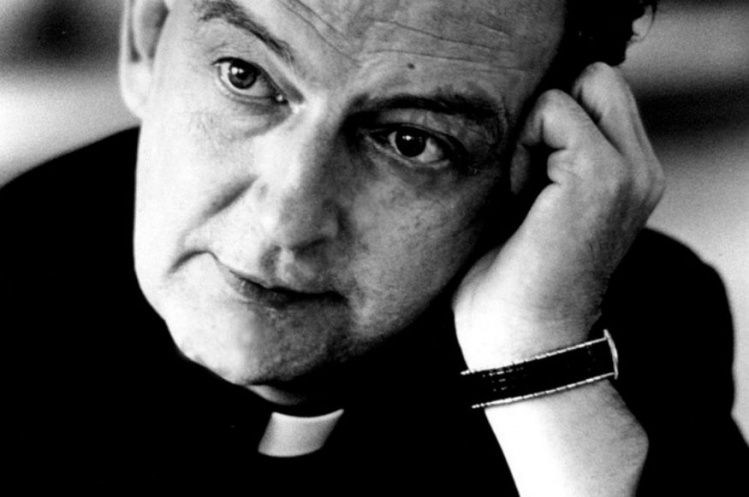 Time magazine profiled Richard John Neuhaus in the fall of 1975, just as his book Time Toward Home was being published. Neuhaus famously—or infamously, depending on your view—told that publication, “When I meet God, I expect to meet him as an American.” The line pithily expresses Neuhaus’s abiding preoccupations as an activist and thinker, and serves as the guiding theme of Randy Boyagoda’s recent biography, Richard John Neuhaus: A Life in the Public Square. The resulting portrait displays an unusually ambitious and politically engaged priest as public intellectual who, if not exactly representative of the times in which he lived, seemed to reflect their deepest conflicts and confusions.

The basics of Neuhaus’s story are well known: his childhood as the son of a Lutheran–Missouri Synod minister in rural Ontario; his time as pastor of a racially integrated Lutheran congregation in Brooklyn; his marching for civil rights with Dr. King in the 1960s and his broadsides against the Vietnam War in the ’70s; and, eventually, his move to the right, reception into the Roman Catholic Church, founding of the neoconservative magazine First Things, and status as an adviser to popes and presidents. Neuhaus’s life brimmed with energy and activity, voluminous writing and constant debating, and it’s a testament to Boyagoda’s skills as a writer that he manages to wrestle all this material into a pleasingly readable narrative. That he also has written two novels comes as no surprise.

It’s possible this narrative is too tidy, however. Boyagoda approaches his task with admiration and sympathy for Neuhaus while never slipping into outright hagiography. Still, I couldn’t shake the feeling that Boyagoda occasionally treated his subject too gently.

Boyagoda has no trouble, for example, revealing that Neuhaus exaggerated his relationship with Martin Luther King, Jr., that his early prose could be awful, or that Neuhaus didn’t always follow his own advice (taken from the Psalms) to “put not your trust in princes.” Yet you have to comb through the footnotes to find out that Neuhaus was a stalwart defender of the serial rapist Fr. Marcial Maciel of the Legionaries of Christ, claiming that he was “morally certain” of Maciel’s innocence. I’m not trying to dwell on one rather troubling mistake. I’m wondering why such a spectacular lapse in judgment was deemed unfitting for the main text of his biography. Boyagoda admits that, even after the Congregation for the Doctrine of the Faith removed Maciel from public ministry in 2006, Neuhaus’s acknowledgment of what really happened possessed “far too much convoluted self-justification.” A more critical treatment of Neuhaus’s life would stop to ask why this was so.

One reason Boyagoda might have relegated Neuhaus’s support for Maciel to the footnotes, I suspect, is to avoid the kind of armchair psychoanalysis that is generally absent from the biography. Where did such certainty in Maciel’s innocence come from, especially in the midst of the broader Roman Catholic sexual-abuse scandals? Can anything be learned about Neuhaus’s cast of mind from the episode? There certainly are good reasons to ask such questions sparingly, and answer them with appropriate modesty, but I would not have minded if Boyagoda made more forays into Neuhaus’s inner life than he does. (One can’t help wondering what Boyagoda would have made of the recent revelation that Neuhaus’s extensive personal diaries were destroyed on his instruction after his death.)

By “inner life” I do not mean an excuse for idle speculation. I mean how he related to those in power, how he understood authority, why he was drawn to some people and ideas more than to others, and how he handled disagreements and countervailing information. A biographer has earned the right, if anyone has, to make informed judgments in that space where personality seems to lurk behind events. Especially when events prove to be so disastrous. Nearly six years after Neuhaus’s death, we can see the wreckage abetted by a peculiar permutation of Christian and neoconservative political advocacy that took great pains to justify preemptive war, defend the death penalty, give American capitalism the imprimatur of papal authority, and, generally, be a reliable if not completely uncritical support for the Republican Party. This baptizing of the neoconservative domestic and foreign-policy agenda proved to be an unambiguous failure. At the height of his influence, Neuhaus aided and abetted a president who left behind a wrecked economy and the carnage of two stalled wars abroad. The scope of the damage done goes beyond the ups and downs of normal politics. You don’t really get the sense that this is the case from Boyagoda’s biography, though, and Neuhaus’s fateful dalliances with the Bush administration are passed off more as trusting the wrong people than as an indictment of Neuhaus’s ideas, preoccupations, and temperament.

Neuhaus’s move to the right offers similar possibilities for exploration. Boyagoda basically embraces Neuhaus’s own explanation for the ideological shift—the left changed more than he did—but the relevant chapter of the biography, “The Lonely Radical Looks Elsewhere,” reads a bit thin. (It’s just over fifteen pages, and primarily concerns a book, In Defense of People, that Boyagoda believes was rightfully panned by reviewers.) Abortion unsurprisingly factors into Neuhaus’s evolution, though much remains hazy. Boyagoda argues that Roe v. Wade provided one of the “national-political contexts for his ongoing shift from Left to Right,” but that doesn’t really indicate how often Neuhaus wrote about abortion in the early to mid-1970s, or if it then occupied precisely the same place in his thinking that it did later. Neither Neuhaus’s move to the right, nor what that move might reveal about the religious right’s contours, are discussed with particular insight or innovation.

Boyagoda’s treatment of Neuhaus’s eventual conversion to Catholicism is much more interesting, particularly because of the way the biography’s early chapters on Neuhaus’s adolescence and time at Concordia Seminary in St. Louis seem to anticipate, without heavy-handed foreshadowing, his conversion. In particular, Neuhaus’s devotion to his professor Carl Piepkorn, a kind of smells-and-bells Lutheran who understood the confession, in Boyagoda’s words, as “a reform movement internal to the universal catholic church,” emerges as especially important. This tracing of a kind of intellectual genealogy is superb. Boyagoda relays the formation Neuhaus received at Concordia, the depth of his friendship with the future historian and fellow Catholic convert Robert Louis Wilken, and the broader context of the tensions among Missouri Synod Lutherans. For most readers, this material will be a revelation.

One of the other distinct pleasures of this biography relates to those moments when politics recedes and Neuhaus’s more personal, devotional writings come to the fore, especially his reflections on death and dying. Boyagoda does not fail to notice that, toward the end of his life, Neuhaus “took on a more reflective and personal frame in his writing.” Whatever criticisms I might have of Neuhaus’s religious-political project, the intensity and beauty of his spiritual writing can be deeply moving. I did not fail to be instructed by this book in that regard. As the biography draws to a close, Boyagoda simply gets out of the way and quotes Neuhaus at length. But perhaps Neuhaus’s most piercing prose comes from a letter to his friend Wilken, written when he was just twenty-six years old, about an “unwanted” baby boy he saw delivered at King’s County Hospital:

The city and the potential of the civilization it represents—to this I am religiously committed. And to the ways of the God who brought it into being. “What is man, that you keep him in mind?” Little baby boy Washington—fear not, He has redeemed you. He has called you by the name you do not yet have, you are His! I cannot guarantee you that this is true. It may be a pious illusion. But it is better than what is called the truth by men, but just must be illusion. You are not alone.

Looking back on Neuhaus's life, I can't help but wish he'd kept more of that youthful contempt for the truths of men.