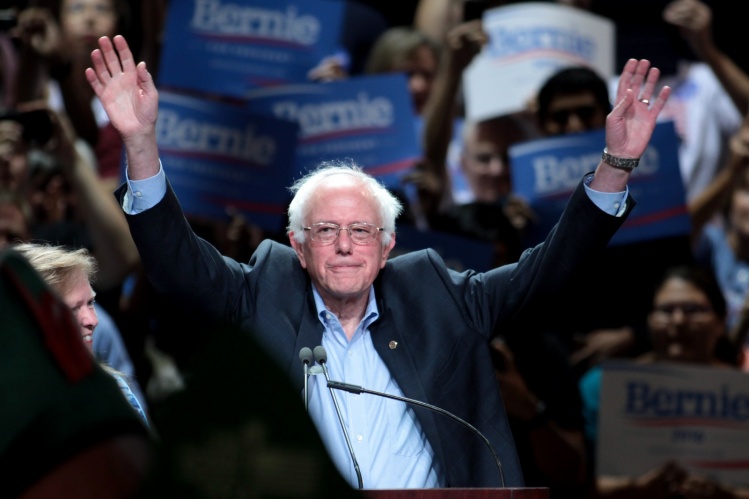 The other day, as I was heading home to my apartment in Washington Heights—a small, somewhat close-knit neighborhood, geographically isolated from the tourism and crowds generally associated with Manhattan—I encountered a young man and woman with clipboards, gently trying to intercept passersby. "Hey," the man made eye contact, "have you heard about Bernie Sanders?" "Yeah,” I said, giving a thumbs-up and walking on, proud I'd been able to answer them in the affirmative. But they both lunged toward me, and started speaking very quickly. "Awesome! Are you registered? Do you know about our group? Are you interested in participating in our events? Do you want to volunteer?"

Brooklyn native Bernie Sanders currently doesn't have a New York City campaign office because, as I was to learn in the course of my encounter, he "didn't think people would like him this much." And so groups like the one I ended up learning about that day—Washington Heights for Bernie Sanders (they call themselves Bernie WaHi)—are getting ready for when he sets one up.

"We realized that the campaign didn’t have the structure yet in New York or as much funding as some other candidates,” said Adam Masser, one of three Sanders organizers who facilitate events and volunteer assignments in Northern Manhattan. Masser and his friends saw a "real opportunity to get the word out on behalf of Bernie and start organizing." So they started inviting their friends, and then their neighbors, to mobilize fellow Bernie supporters while also cultivating new ones.

Still a problem for Bernie at the moment is name recognition: “Bernie Sanders” doesn’t register with the same immediacy that “Hillary Clinton” does. So Bernie WaHi will focus on that, while also hosting more events and recruiting more volunteers. Voter registration is also part of the plan: Supporters are seeking to sign up people who’ve never voted, and to get registered Independent and Green Party voters to register as Democrats before the October 9 deadline.

Bernie WaHi takes its name from Washington Heights, but it covers a wider geographic area that includes Northern Manhattan, Harlem, Inwood, and the South Bronx—all bordering neighborhoods. At a citywide organizing meeting with twenty other organizing leaders, Adam and others agreed to work together and make sure every voting district is covered.

I asked him if they had official word Sanders was opening an office or if this was all "just hope." "Definitely not just hope. But,” Masser admitted, “there hasn't been any official word." Sanders has offices in New Hampshire, Iowa, Nevada, South Carolina, and in his home state of Vermont. Whether or not an office is ever opened in Manhattan, there will “definitely be campaign events,” Masser said, and he will definitely have a body of volunteers mobilized.

A sentiment I have heard repeated is “I don’t really like Hillary, but Bernie is…” Too old, too left, too radical, too something. And then I hear, “I would love to see him as president, but I don’t have too much hope it will happen.” But the more I meet people like Masser and his fellow Sanders supporters, the less I accept that.

Sanders is in an “upward trajectory,” Masser pointed out. His main message—that this country belongs to all of us, not just the billionaire class—resonates with a lot of people. He is the only candidate who doesn’t have a super PAC—something not lost on those most turned off by the state of presidential politicking.

But Sanders would probably be the first to admit he needs all the help he can get, where he can get it. Could the grassroots efforts in his hometown provide another boost?