Pope Francis’s new environmental encyclical cites the usual sources. In addition to Scripture, we find the documents of the Second Vatican Council, the encyclicals and addresses of his papal predecessors, the Catechism of the Catholic Church, his own Evangelii Gaudium, and others.

Most surprising, however, is Francis’s turn to the documents of national and regional bishops’ conferences.  He cites one USCCB document (no. 52), one from the Canadians (no. 85), two from the Germans (nos. 48 and 69), and one from the Portuguese (no. 159). I counted twenty-one references to environmental documents from episcopal conferences.  Only the five mentioned above represent North America and Europe. The remaining sixteen refer to documents from bishops’ conferences in Latin America, Africa, Asia, and Oceania.  Twice he cites the Latin American Bishops’ 2007 Aparecida document, on which he worked (nos. 38 and 54).

These references are doubly striking.  First, Pope Francis is the self-proclaimed “man from the end of the world,” who appoints new cardinals from places many Americans have never heard of.  As the pope of the periphery, Francis does not treat such questions as the environment and the family exclusively, or even primarily, in terms of perspectives dominant in Washington, Bonn, London, or even Rome. He wants to hear the voices of the churches from the Global South. Americans are going to have to get used to the fact that they make up only about 4% of the world’s Catholics. As this encyclical makes clear, Pope Francis does not map easily on to the landscape of cultural and political strife in the United States. His upcoming visits to Washington and Philadelphia will, I suspect, make this even clearer.

Second, these twenty-one references to teaching documents of episcopal conferences signal Francis’s own vision that the church of which he is chief pastor and teacher is a collegial body.

In a series of moves over two decades, and with the help of Joseph Ratzinger as Cardinal Prefect of the Congregation for the Doctrine of the Faith, Pope St. John Paul II successfully challenged the status and teaching authority of national and regional episcopal conferences, such as the ones that had dissented from Humanae Vitae, took control of episcopal synods, and generally circumscribed the council’s teaching on episcopal collegiality. Pope Francis’s recourse to the teaching of episcopal conferences in Laudato Si’ is one of many indications that he is in the process of leading the church to revisit the council’s teaching on episcopal collegiality.

Another surprise in Laudato Si’ is Francis’s eight citations of The End of the Modern World (1950), Romano Guardini post-war critique of what Francis calls “the power of technology to globalize and make us all the same” (no. 108). Guardini’s opposition to the Nazis, who removed him from his teaching position at the University of Berlin in 1939, enhances his twenty-first-century moral credibility to talk about what happens when technology becomes untethered from the human. It is said that, during the 1980s, Jorge Bergoglio planned to write a theology dissertation on Guardini (d. 1968). The End of the Modern World was reprinted in English in 1998 and you can get it on Amazon.

Finally, in exhorting us to “hear both the cry of the earth and the cry of the poor” (no. 49), Pope Francis invokes an abundance of lyrical resources to blend poetry with science and theology. In addition to St. Francis’s Canticle of the Creatures, cited in full in no. 87, Pope Francis recalls the Spiritual Canticle of St. John of the Cross (no. 234), the Sufi spiritual writer Ali al-Khawas (no. 233), Pierre Teilhard de Chardin (no. 83), and Canto 33 of Dante’s Divine Comedy singing of “the love which moves the sun and the stars” (no. 77). 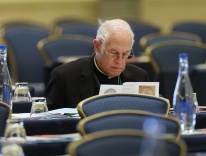 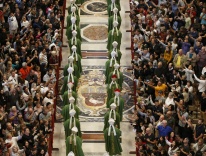 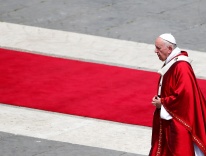