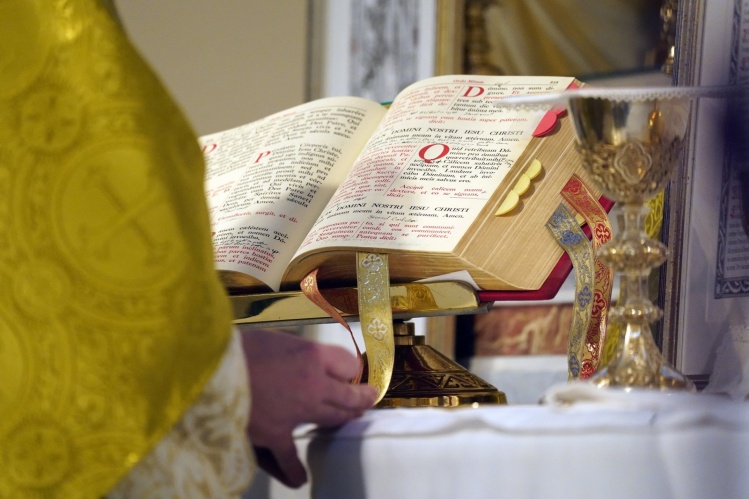 A sacramentary on the altar during a traditional Latin Mass, July 18, 2021, at St. Josaphat Church in New York City (CNS photo/Gregory A. Shemitz)

Traditionis Custodes, Pope Francis’s July motu proprio on the pre-conciliar Mass, caught many observers and liturgical experts by surprise. Not because of what it says about Francis’s theological thinking (he has always been adamant in defending the validity of Vatican II’s liturgical reform), but because of the document’s unequivocal rejection of Benedict XVI’s Summorum Pontificum, and because of the timing of its release—that is, while Benedict is still alive.

As has been clear since Summorum Pontificum was published in 2007 (and has been underscored by Traditionis Custodes), papal documents on the liturgical rite are not about the liturgy alone, but about the theology of Vatican II, which many proponents of the “old Mass,” both clergy and lay, have rejected. In the English-speaking world, this was confirmed with harsh critiques of Francis’s motu proprio by Ross Douthat and Michael Brendan Dougherty, both writing in The New York Times, and by Cardinal Robert Sarah, former prefect of the Vatican dicastery for the liturgy, in National Catholic Register.

More than a document, Traditionis Custodes represents one of the most important papal acts in the history of the reception and implementation of Vatican II. But it would be naïve to understand Francis’s response to neo-traditionalism simply as a return to the status quo ante. Such a return is impossible. It’s not because a future pontificate could reverse Francis’s reversal of Benedict. Nor is it because the magisterium can no longer expect “obsequium religiosum” (Vatican II, constitution Lumen Gentium, par. 25), not even from bishops and conservative Catholics. Rather, it’s because the ecosystem of Western Catholicism has changed significantly since 2007. The rise of social media has helped nurture a post-modern, media-savvy, resentful traditionalism that plays out in the undermining of this papacy both by prominent conservative laypeople and by clergy—an effort that began within days of the election of Francis in 2013.

Another factor is how our current age of disintermediation has affected the experience of Catholics, particularly our experience of the liturgy. Since March 2020, the celebration of the liturgy for many Catholics has taken place through a computer screen. This affects how we see the link between liturgy and ecclesiology. Covid-time Mass has increased the tendency to re-sacralize the Catholic priesthood: more distance from the altar and within the pews, the impossibility of the kiss of peace (which even in the early Church helped differentiate between a temple-like understanding of worship and the Church as a communion), and a drastic reduction in (if not redefinition of) active participation. The post–Vatican II Catholic Mass has suffered more from the pandemic than has the pre–Vatican II, traditionalist Mass, in which the concept of participation is quite different (to say the least) from the “actuosa participatio” that Vatican II talks about.

Pope Francis’s move against anti–Vatican II traditionalism is a test for his pontificate.
sharetweet

But perhaps the biggest factor in making a return to the pre-2007 situation impossible is the weakened authority of Vatican II in today’s Church. Pope Francis’s move against anti–Vatican II traditionalism is a test for his pontificate. It comes as something like a referendum on which bishops are forced to take a stand, since the document gives local bishops the responsibility to rein in traditionalist Catholics in their local churches. And so far, the response to this referendum has been mixed, not only in the United States, but also in places where traditionalism is much more marginal, such as Italy. Some bishops may be driven by pastoral sensitivity, while others may be motivated by the chance to defy Francis again and to solidify the traditionalist movement.

In short, anti–Vatican II traditionalism (liturgical and theological) will not disappear by papal fiat. It was kept at bay in first few decades following Vatican II, even during the papacy of John Paul II, who with a doctrinal policy inimical to theological progressivism nonetheless maintained the authority of the council. But Benedict, citing a “hermeneutic of continuity and reform” meant to prevent SSPX-like rejections of Vatican II, instead helped foster a rehabilitation of traditionalism that reinforced his anti-progressive positions. This is the most important and lasting legacy of Joseph Ratzinger’s pontificate. Anti–Vatican II liturgical and theological traditionalism is not only present, but in some local churches in the U.S. and in Europe is here to stay. It’s evident in the fervor of monasteries that are seeing an increase in vocations, which suggests a rise in presbyteral ordinations and the growth of monastic commitments. More importantly, there is reason to believe that anti–Vatican II traditionalism is not a minority position among young clergy. It’s also hard to deny that Catholic traditionalism sometimes expresses exclusivist, sexist, and racist worldviews, and that the “old Mass” leaves the door open for a pre–Vatican II theology of the relationship between the Church and Judaism that resurfaces old anti-Semitic tropes.

This problem is particularly acute in the United States, where liturgical traditionalism is a misguided response to a crisis of liturgy more than to a crisis of faith. Catholics didn’t stop going to Mass simply because of institutional disaffiliation or to protest the corruption and detachment of the clergy. Catholics’ relationship to the liturgy also changed, influenced by cultural emphasis on the evolutionary and linear and a rejection of the cyclical dimension of religious experience. This is a phenomenon that long predates Vatican II (by at least two centuries), and one that the liturgical reform efforts beginning in the late nineteenth century (which were not “liberal” or “Protestantizing”) were intended to counteract. Today’s traditionalism is thus in some ways a response to the extinction of the understanding of tradition as a fundamental node of knowledge.

And yet, the reception of Vatican II and its liturgical reforms is at the center of the current crisis. Part of the problem is the marginal place that the theology of the liturgy has, compared to other fields, in Catholic academia, college curricula, and the annual conferences of professional theologians. In the early 2000s, progressive Catholics said that the crisis in the reception of the council was the fault of John Paul II and Benedict XVI. That may have been true then, but at this point they alone can’t be blamed. Though it’s clear now who’s attacking Vatican II, it’s not clear who is defending it, or “which” Vatican II should be defended. The teaching of the council was once the vanguard—the future of Catholicism. I believe this is still true for global Catholicism, but I’m not so sure about North America. There has been an “interruption” not just in the scholarly tradition of examining Vatican II, but also in our ecclesial conscience. Vatican II Catholicism went dormant while the anti–Vatican II and reductionist voices came to be the most vocal in the hierarchy. Instead of the vanguard, Vatican II has become something like a rearguard position to be defended both from traditionalists and radical progressives—not just on particularly sensitive points (e.g., the apostolicity of the Church and the role of the bishops, the role of women, gender, and sexuality), but on Vatican II as an example of the tradition in its dynamic and normative dimensions.

Vatican II needs an interpretation that speaks to the receivers of that tradition today. We can’t ask Pope Francis to do it alone while we let his opponents aggressively work to abrogate it. Simply countering or reacting to right-wing traditionalists isn’t a defense; it just won’t work. Rather, it’s time to take up the theological meaning of the documents of Vatican II and the magisterial significance of the conciliar event. The Catholic Church is called to begin again, especially in the United States—in the seminaries, in the parishes, in academia—to undertake a process of the reception of the theology of Vatican II that puts aside generational rifts and fills the gaps in conciliar teaching. We can do that by building on the very basis of the tradition dynamically understood, as opposed to “tradition” that emphasizes contrast, conflict, and conquest.