Why is the reception of the council still an issue?
By Massimo Faggioli
Vatican II
Bishops
Pope Francis 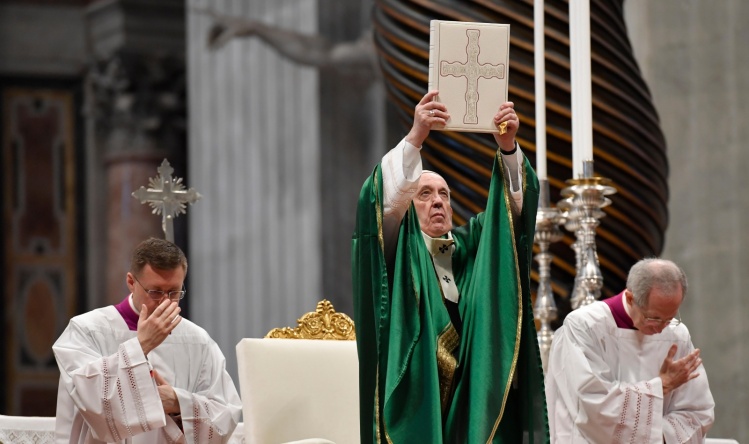 Pope Francis holds up the lectionary that was used during the Second Vatican Council, January 26, 2020 (CNS photo/Vatican Media).

Pope Francis has said some interesting things about Vatican II in the last several weeks. On January 11, in a letter to the cardinal prefect of the Congregation for the Doctrine of the Faith accompanying his motu proprio allowing women to become lectors and acolytes, the pope described his decision in terms of the “horizon of renewal traced by the Second Vatican Council” and “in line with the Second Vatican Council.” Then came these remarks in his January 29 speech to the national catechetical office of the Italian bishops’ conference:

As with all other teachings by Francis, these statements speak in a particularly direct way to U.S. Catholicism. In recent months, some bishops and clerics have tried to advance a theologically defensible conservative interpretation of Vatican II, something to counter the extremist views of Archbishop Carlo Maria Viganò and a group of like-minded quasi-schismatics, who in addition to rejecting the “Bergolian” magisterium have taken a position that’s hard to distinguish from pure and simple rejection of the council’s teachings. Bishop Robert Barron, for example, has spoken of attacks on Vatican II as a “disturbing trend,” and Thomas Weinandy, former executive director of the Secretariat for Doctrine and Pastoral Practices of the USCCB, has chastised Viganò for challenging the council’s authenticity.

But there’s more than theological interpretation to consider. The alliance of conservative American Catholicism with Trumpism also says something about the reception of Vatican II; the fascination some have for a quasi-Caesarean political leadership is a symptom of the council’s failure in this country. Yet even if this is most evident among the extreme voices on the conservative side of the spectrum, it’s not a uniquely conservative problem. There are broader systemic phenomena in play, which in the last few years have exposed fault lines on the liberal-progressive side as well.

The first is an “interruption” in the scholarly tradition of examining Vatican II. Studying the council requires fluency in Latin and other languages, and an intellectual ecosystem in which theology is grounded in conversation with Church history and the history of theology, not just social sciences. There is still no consensus on the English translation, the last one of which is now more than twenty-five years old (Austin Flannery, 1996; this was preceded by the one edited by Norman Tanner, SJ, in 1990, and that by Walter Abbott, SJ, in 1966). There are important studies on America and Vatican II (like the one forthcoming by Joseph Chinnici), but the last American history of Vatican II is John O’Malley’s What Happened at Vatican II, published in 2008 during the pontificate of Benedict XVI.

A related factor is a breakdown of the coexistence and collaboration that used to characterize the “working relationship” between professional theologians, Catholic laity, and the institutional and hierarchical Church. This a result of the dangerous intra-Catholic tensions—ecclesial and political—that have developed in this country over the years since the publication of multivolume commentaries on the documents of Vatican II (in 1967, edited by Herbert Vorgrimler; in 1987, edited by René Latourelle and published by Paulist; and in the early 2000s, the “Rediscovering Vatican II” series from Paulist). Other countries have not experienced this to the same degree; in the past two decades, large networks of theologians in Italy, Germany, Spain, and Latin America have produced important volumes of Vatican II commentary. The lack of such work in the United States has consequences for Americans who wish to study the council. There seems to be more space now in the Catholic theological academy for pre– and anti–Vatican II theology on one side, and a post–Vatican II theology with fewer discernible ecclesial commitments on the other side. Vatican II itself is caught in something of an intellectual and ecclesial no-man’s land.

Anger at an institution viewed as unresponsive (at best) on key social issues has led to the idea that the Church has lost all prestige, and thus that Vatican II has as well.
sharetweet

Another factor: this age of global anger. The sexual and financial scandals have brought about a moral and legal crisis, but also a theological one—and one that is deeper than that brought on by the previous phase of the sex-abuse scandal in the early 2000s. Anger at an institution viewed as unresponsive (at best) on key social issues has led to the idea that the Church has lost all prestige, and thus that Vatican II has as well; its authors and episcopal leaders, the generations of its interpreters since then, and an entire tradition of studies are seen as irrelevant. There is a sense of resentment, and it’s not just a reflection of an anti-historical mentality. Rather, it arises out of the belief that Vatican II did not engage with issues of gender and race in as radical a way as the times now demand, and as readings of the Gospel today demand. The debates at Vatican II, as well as the post-conciliar historical and hermeneutical debate, have been dominated by white men. Just a few examples: the theology of Vatican II still works (albeit with some limitations) against anti-Semitism. It works less effectively when it is about the role of women in the Church or the issue of abuse (sexual, of authority, and of power). Vatican II shows the shortcomings of an early 1960s theology—developed in an early, post-imperial Catholicism just beginning to understand the post-colonial world. Now the disruption of the global order has revealed the inadequacy of that theology, as well as the ecclesiology, which was very much bishops-centered.

The fourth factor is the shift in perceptions of ecumenism and interreligious dialogue between the time of the council and now, in this post-9/11, twenty-first-century world. We have moved from a narrative of encounter to a narrative of clash and conflict. Compared to the 1960s and ’70s, Catholicism has to engage with more assertive (both religiously and politically) faiths around the world, as well as with a more assertive secularism. This has coincided with a rise of converts who bring a different set of expectations to their understanding of Church tradition, which gives greater emphasis to the fathers of the Church, the Catechism, and papal teaching than to the conciliar tradition, including Vatican II. And this in turn introduces new interpretations of historical periods: Was Vatican II really the beginning of dialogue with secular culture and with other religions? Or did Vatican II simply miss the roots of radical, political Islam? Did Vatican II embrace decolonization or did it actually help extend the life of colonial theology?

I should note that perceptions about the relevance or irrelevance of Vatican II vary from place to place. In Latin America, for instance, Vatican II is still highly regarded both in the Church and in academia, while in the United States opinion is more divided. But that just proves how the global conversation on the council is impacted; the tumultuous ecclesiological and cultural changes substantively and substantially influence the approach to Vatican II around the world. I learned this firsthand in working as a member of a global team for a new, twelve-volume intercontinental commentary on Vatican II.

What’s happened in the last few years on both the institutional and intellectual level raises questions over the historical role of Vatican II in the global Church. Was it the beginning of a new Catholic history, or a parenthesis in the larger post-war parenthesis of the liberal order, which itself is now in crisis? A rhetoric that posits Vatican II as the beginning of the intellectual and moral crisis of Catholicism (nostalgia for the pre-conciliar period) is set against the rhetoric of Vatican II as the last gasp of catholicity (nostalgia for the conciliar epic and the first period after the council). Francis’s pontificate is showing how key a contribution the theology of Vatican II has been for the transition from a European-centered Catholicism to a global one. At the same time, this moment in the globalization of the Church is also showing the limits of Vatican II.

It’s true that opposition to Pope Francis is rooted in opposition to Vatican II, especially in the United States. It’s also true that the range of positions regarding Francis and Vatican II in the United States helps us understand how the council’s documents may not be able to serve the Church today—and perhaps what can be done to improve the reception and application of those documents. But there appear to be limits to what Francis’s faithful reception of Vatican II can accomplish. And given the ecclesial split over Francis’s pontificate, it’s hard to imagine the calling of another general council anytime soon. Perhaps there’s reason to hope that Vatican II could find new life in local and national expressions of synodality, giving a jolt of energy to the ecclesial process while, in the bargain, addressing some of the gaps left by the theology and the teachings of the council. But it remains to be seen if this kind of synodality is the synodality that Pope Francis has in mind.