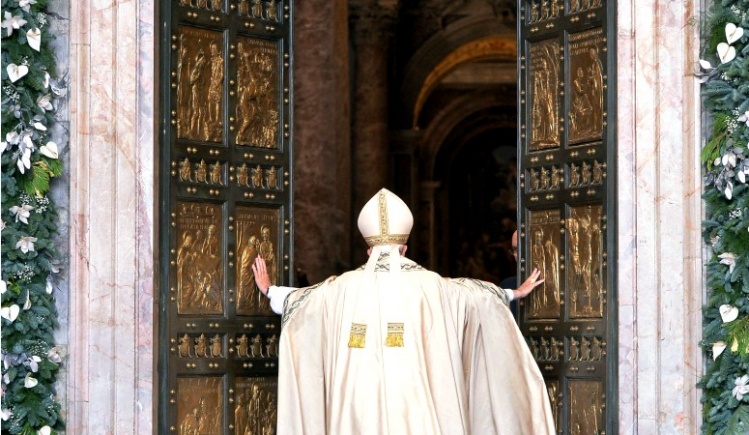 The yearlong Jubilee of Mercy is officially underway and Pope Francis is hoping it will make the Church less judgmental, more forgiving, and even more open to the world. But before he unlocked the Holy Door at St. Peter’s Basilica on Tuesday to the launch the worldwide celebration, he uttered a phrase that many Catholic traditionalists consider most unholy—the spirit of the council; yes, the Second Vatican Council.

“The Jubilee challenges us to this openness, and demands that we not neglect the spirit which emerged from Vatican II, the spirit of the Samaritan, as Blessed Paul VI expressed it at the conclusion of the council,” Francis said in his homily at mass in St. Peter’s Square.

The pope explicitly chose to begin the Holy Year on the fiftieth anniversary of the December 8, 1965, close of Vatican II. He said the historic, four-session event (1962-1965) could not be limited to its written texts (and, one should add, even if a not-insignificant number of bishops and cardinals try to do so).

“This anniversary cannot be remembered only for the legacy of the council’s documents, which testify to a great advance in faith. Before all else, the council was an encounter. A genuine encounter between the church and the men and women of our time,” he said.

Francis said Vatican II helped the church “emerge from the shoals which for years had kept her self-enclosed so as to set out once again, with enthusiasm, on her missionary journey.” He said it was hope that “after these decades,” since the end the council, the church might “again take up this missionary drive with the same power and enthusiasm.”

The next day at this general audience in St. Peter’s Square, the pope summed up the purpose of the yearlong Jubilee of Mercy this way:

What most pleases God? To forgive and have mercy on his children so that they, in turn, might forgive their brothers and sisters.

As he said at the Jubilee’s opening mass, “We have to put mercy before judgment, and in any event God’s judgment will always be in the light of his mercy.”

This extraordinary Holy Year is the first to be “decentralized” in the sense that Pope Francis does not expect everyone to make a pilgrimage to Rome and walk through the sacred portal he opened this week at St. Peter’s Basilica.

That’s why, for the first time in the seven-century history of church jubilees, he has decreed that every diocesan cathedral and some of the most important shrines around the world have their own holy doors.

That’s a good thing, for a whole host of reasons. But perhaps the least theological (and most mundane) of all is that decentralizing the Holy Year will make it more difficult for critics to declare it a flop when, inevitably, the Rome events draw smaller than expected crowds.

That certainly was the case this week. Estimates varied, depending on the source, but any honest observer would have to admit that the turnout for Tuesday’s mass and opening of the Holy Door at St. Peter’s was not spectacular. The 40,000 or 50,000 people that went through various security checkpoints to fill the upper part of the square constituted an average gathering for an outdoor papal liturgy.

Other special events—such as a number of gatherings during the Great Jubilee of 2000, the funeral of John Paul II in 2005, and his canonization along with John XXIII in 2013, to name only a few—drew crowds that spilled out of St. Peter’s Square and down the Via della Concilizione that heads towards the Tiber River. Even a normal Easter Sunday Mass and “Urbi et Orbi” Blessing draws more people.

The modest turnout this week was all the more surprising given that December 8 Solemnity of the Immaculate Conception is a national holiday in Italy. And seeing that it fell on a Tuesday this year, it promised to bring visitors from all parts of the country for an extended holiday weekend.

Usually, the streets and squares of Rome’s historic center are bustling with merrymakers the night before this festal day, traditionally seen as the start of the pre-Christmas shopping season.

But that was not the case this year. The area around the Pantheon and the usually busy Via del Corso were eerily empty at 10 p.m. on Monday evening. Only a few small groups of tourists meandered down the Via dei Fori Imperiali that cuts through the softly illuminated ruins of the Roman Forum. And there was barely crowd worth mentioning at the defiantly eternal shell and symbol of ancient Rome that is the Colosseum.

It was like a midweek “school night” when no one is around. Sadly, it appears many residents are staying away from these historic places out of dread fear that the Eternal City may be the next target of fanatical terrorist attacks.

It was in a slightly different context, but Pope Francis’s words on Tuesday could just as easily be applied to this situation, as well.

“Let us set aside all fear and dread, for these do not befit men and women who are loved,” he said.  “Instead, let us experience the joy of encountering that grace which transforms all things.”

After a big papal event at the Vatican several months ago, a colleague said something to the effect, “Say what you want about us Catholics, but you have to admit we know how to do ceremonies.”

Well, yes... and no. The celebration on Tuesday for the beginning of the Jubilee of Mercy sadly was in the “no” column.

You can’t expect the Vatican to give too many prominent roles to women in the Eucharistic liturgy. The Church’s liturgical guidelines don’t allow them to do much except read the first two readings, read a petition, or bring up the offertory gifts. Serve at the altar? Not at a papal liturgy in St. Peter’s.

But it was not so much the mass on Tuesday that gets a “thumbs down,” even though it’s probably long past the time to forever get rid of some the ridiculous accoutrement—remnants of the papal court—that are worn by attending priests and monsignors who are not concelebrating.

No, the really disappointing feature was the para-liturgical event that took place after mass was over, when Pope Francis opened the Holy Door of St. Peter’s Basilica. The entire assembly—and the pope—had to wait more than ten minutes after the final blessing until every single priest and bishop in the square made his way up the front steps of the basilica and onto its enclosed porch.

Why did all of them have to be there, but only a handful of specially selected laypeople? The clergy could have stayed in the square with all the other worshipers. And then, once the pope had opened the door, all could have begun the procession to pass through it (priests and people) together.

Images speak loudly. And the message that resounded from the ceremony to open the Holy Door at the Vatican was that this is still, primarily, a clerical church. Hopefully, someone with greater sensitivity is planning next Sunday’s ceremony when Papa Francesco, Bishop of Rome, opens the Holy Door of his cathedral, St. John Lateran.