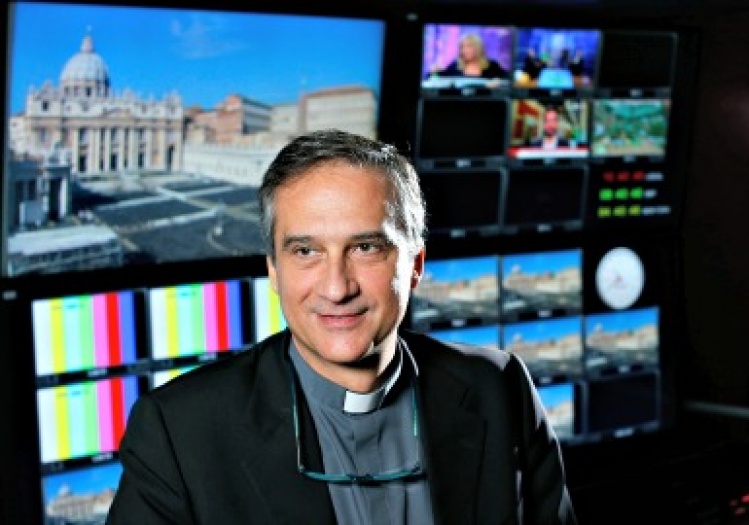 Pope Francis added yet another layer to the Vatican’s bureaucracy last weekend when he established the Secretariat for Communications.

But the creation of this new super-dicastery is actually designed to streamline and coordinate the Holy See’s efforts in the fields of multimedia, publishing and press relations by “incorporating” nearly a dozen currently existing offices and departments under the direction of an “integrated, overall management” team.

At least that’s how the motu proprio that the Pope issued last Saturday describes the new “reform”. It also noted that all nine members on his elite Council of Cardinals (C9) were unanimous in supporting the move.

These are the offices that will fall under the umbrella of the new secretariat: the Pontifical Council for Social Communications, the Holy See Press Office, the Vatican Internet Office, Vatican Radio, the Vatican Television Center (CTV), L’Osservatore Romano (OR), the Vatican Print Shop (tipografia), OR Photo Services and the Vatican Publishing House (Libreria Editrice Vaticana-LEV). The Secretariat for Communications will also oversee the management of the aggregated news portal, News.va, and the Pope’s Twitter account, @Pontifex.

There is a lot of work to be done in what officials say will be a gradual, four-year project to totally overhaul and reorganize the way the Vatican communicates in the constantly changing digital age. It will not be an easy task, since a number of the departments affected have enjoyed and jealously defended a relative autonomy, which means they have also been overlapping with each other and duplicating work.

Many egos will have to be engaged with great care to make sure this reform is carried out successfully.

Pope Francis should be applauded for launching the new effort. But many will find it difficult to praise him for the top four officials he has chosen to lead the secretariat.

First of all, they are all men and, then, three of the four are Italians. The prefect is Msgr. Dario Viganò, a 52-year-old Milan priest who has spent the past few years as head of CTV. The secretary is Msgr. Lucio Ruiz, 50, an Argentine priest that has worked in the Vatican the past eighteen years, first as a personal assistant to Cardinal Dario Castrillon Hoyos at the Congregation for the Clergy and, since 2009, as head webmaster of the Vatican Internet Office.

The Pope’s choice for “general director” is Paolo Nusiner, 52, a businessman from Bergamo that is one of the heads of Avvenire, the daily newspaper owned by the Italian Episcopal Conference. And his vice-director is Giacomo Ghisani, a 46-year-old civil lawyer involved with administration at Vatican Radio and CTV. All of these officials were either members of the committee headed by Lord (Christopher) Patten to review the Vatican’s media operation and suggest ways to reform it or the commission to implement those suggestions.

Missing from the top brass of the new Secretariat for Communications is a high-level Vatican official that was a member of both the committee and the commission—Msgr. Paul Tighe, a 57-year-old Dublin priest that has spent the past eight years as secretary at the Pontifical Council for Social Communications. There is speculation that he will be sent back home to be a bishop. Others think he’s in line to take over from Archbishop Claudio Celli next year when he retires as the council’s president. But the best bet is that he’s made ordinary of a very nice diocese in Ireland.

This week’s biggest applause goes to Bishop Guglielmo Borghetti of the Diocese of Albenga-Imperia, part of the ecclesiastical province of Genoa in Northwest Italy. The 61-year-old Tuscan native is actually the diocese’s coadjutor bishop. Pope Francis appointed him to the post this past January and gave him “special faculties”—specifically, “ordinary, proper and immediate power” to govern the diocese, as stipulated by canon 381 in the Code of Canon Law.

The reason? The man that has led Albenga-Imperia since late 1990, Bishop Mario Oliveri, has been, shall we say, a bit too eager in accepting seminarians that were rejected or kicked out of other dioceses and was also too quick to lay hands on just about anyone who presented himself for Holy Orders. Some of these retreads were later found to be involved in some rather unholy activities—like posting nude photos of themselves on Facebook or having a rap sheet for playing around with little kids, or stealing from the collection basket.

Bishop Oliveri, a former Vatican diplomat, had actually requested (or was forced to request) a coadjutor. His official line was that he needed help to deal with problems that he had neglected and could no longer handle because of his advanced age. He barely made it to 71 on January 22, a little less than two weeks after the Pope had granted his call for assistance.

Bishop Oliveri is a friend and supporter of the Neo-Tridentinist movement, which is indebted to the ex-pope, Benedict XVI, for giving it new life, a semblance of legitimacy and also cover. It was from this retrodox wading pool that the bishop found bodies to fill the seats in his seminary.

Well, it seems pretty clear that those days are over. Just last week Bishop Borghetti—the de facto head of Albenga-Imperia—chucked out five seminarians. A week before that two others had “decided on their own” to pack up their cassocks and seek refuge elsewhere. The diocese now has four seminarians, but the word is that they, too, are more carefully “discerning” their vocations.

Bishop Borghetti, who headed the triple-barreled Diocese of Pitigliano-Sovana-Orbetello for four years before his current mission, is a professional psychotherapist. He did his studies at the State University of Padua and the Pontifical Salesian University in Rome.

His doctoral thesis was titled, From Munchausen Syndrome to Hypochondria: The Effects of Psychosomatic Disturbances on Human Relations in Consecrated Life and the Priesthood.

The June 29 Feast of Saints Peter & Paul, the patrons of the Eternal City, usually marks the real beginning of summer for the Roman Curia.

That was before Jorge Mario Bergoglio, the Jesuit from Argentina, where it is currently winter, became Bishop of Rome. Once again, our beloved Pope Francis has decided to break with longstanding protocol and keep “working” instead of going on vacation, as did most of the popes before him. In fact, mindful that one of them, Benedict XVI, is still here among us, he has offered him use of the papal summer villa down in the Alban Hills for a next couple of weeks.

Instead of going away for some downtime, Francis is taking to the skies next Monday and heading across the Atlantic Ocean to Latin America for a weeklong trip that will take him to Ecuador, Bolivia, and Paraguay. He will be returning to Latin America in September when he makes a three-and-a-half-day visit to Cuba before a quick tour to Washington, New York, and Philadelphia.

These will be his ninth and tenth journeys outside of Italy since he became pope a little more than two years ago. Half of them have been to the outer edges of Europe and the Mediterranean region, but the other half have been long-range trips to East Asia (two) and the Americas (three).

That’s a lot of travel: many miles and all at a considerable expense. So who pays for the Pope of the Poor to log all these miles? Vatican officials have always been reluctant to discuss this aspect of the Successor of Peter’s program of going abroad to “confirm his brothers (and sisters) in the faith.”

It is clear that local churches are often left with a large tab at the end of these priceless papal visits. They don’t like to discuss the matter, either. The Vatican does not even disclose the costs of airfare. But it is believed that the 60-70 journalists that are selected by the Holy See Press Office to accompany the Pope help subsidize costs by forking out big bucks to fill up the seats in the back of his plane.

For example, journalists are paying 5,372€ (roughly $6,000) for a spot on the papal plane to Latin America. In comparison, the Cuba-USA visit in September looks like a bargain. It only costs $5,175.