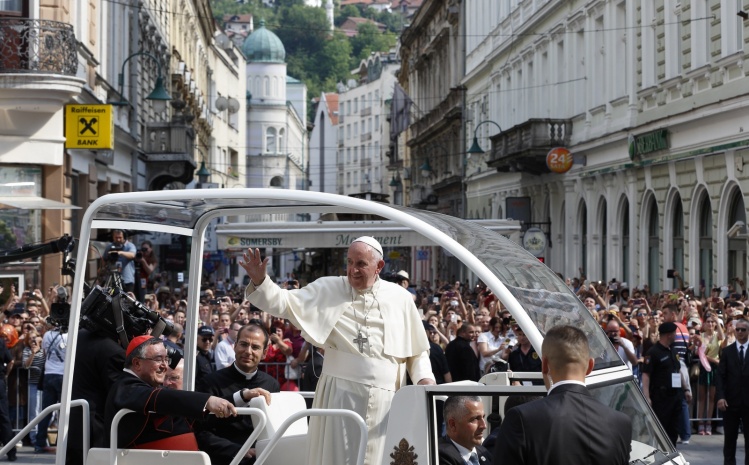 The entire month of June and the first part July promise to be extremely busy for Pope Francis. Over the course of the next six weeks, he will make two international trips and also travel to Northern Italy for a two-day pilgrimage to venerate the Shroud of Turin. ­

Francis begins his travels on June 6 when he flies to Sarajevo, the multi-ethnic and multi-religious capital of Bosnia and Herzegovina. The daylong visit comes two decades after a still-fragile peace ended a horrific three-year war that devastated the city and the region.

It will be Francis’s eighth voyage outside of Italy, but only the third time within Europe.

His ninth foreign journey will be more ambitious and physically taxing—a three-country tour of South America (Ecuador, Bolivia and Paraguay), from July 5-12.

In between these trips abroad the pope will go to Turin, home of the alleged burial cloth of Jesus Christ. That June 21-22 visit is packed with events. The most historic will be Francis’s meeting with members of the Waldensian Evangelical Church. He will be the first Bishop of Rome to enter a house of worship belonging to Italy’s largest Protestant community, which dates back to the twelfth century.

Travels hither and yon are just the most dramatic events on the early summer papal calendar. But they are in not the only ones that will test the pope’s stamina.

On Wednesday he had his first of several large gatherings this month in Rome in a sun-baked St. Peter’s Square, where he spent a couple of hours with the tens of thousands of people that came for his weekly general audience.

He’ll be going to his Cathedral of St. John Lateran Thursday to celebrate the annual outdoor Mass for the Feast of Corpus Christi and will then make the nearly one-mile-long Eucharistic procession to the Basilica of Saint Mary Major.

Francis will be back at the Lateran a week later to preside at Mass for the Charismatic Renewal’s Worldwide Priests’ Retreat. And don’t forget the June 29 Feast of Saints Peter & Paul… and few other events in between.

With such a schedule, it’s no wonder the seventy-eight-year-old pope constantly asks people to pray for him.

Regular readers of the “Letter from Rome” may remember me talking about Msgr. Pietro Sigurani as one of the Eternal City’s most inspiring preachers and a tireless servant of immigrants, the poor, and the needy.

A few months ago I wrote about the daily sit-down lunches that “Don Pietro” and his helpers offer to the city’s poor right inside little Basilica of Sant’Eustachio, near the Pantheon. The seventy-eight-year-old priest has been rector of the baroque church since the end of 2012, shortly after he was “retired” from thirty-some years as pastor of the thriving Nativity of Our Lord Jesus Christ Parish just beyond the Lateran.

Don Pietro is a beggar when it comes to soliciting help for the poor and, because he walks the talk, people give.

A few weeks ago he asked his “parishioners” to chip in for a special initiative.

“I want to take our poor friends to Turin to see the shroud,” he said.

“You can believe the shroud’s authentic or not; that doesn’t really interest me,” he continued. “But I do know that is the suffering image of the poor and our poor should have the privilege of reverencing it.”

He asked for donations to help pay for the six-hour bus ride and a night in a hotel for about eighty people. The idea was met with enthusiasm.

A couple of weeks later Don Pietro had good and surprising news. He said he had called the Archdiocese of Turin to request a special viewing of the shroud and Archbishop Cesare Nosiglia offered to house and feed the pilgrims.

Then the news got even better. Just a few days ago the Vatican’s almoner, Archbishop Konrad Krajewski, informed the community that Pope Francis would pay for transportation.

In fact, he’s also paying for an even larger group of homeless and poor people that left from Rome Wednesday with Fr. Antonio Nicolai, pastor of Santa Lucia Parish, not far from the Vatican. Don Pietro and his friends of Sant’Eustachio will go to Turin next week.

“Here’s how the press ignores Pope Francis when he rails against abortion.”

That’s a pretty accurate translation of a headline that appeared Monday on the Italian news site Formiche. Niccolò Mazzarino, the author of the article that followed, chastised journalists (presumably his Italian colleagues) for ignoring the pope’s condemnation of abortion in a speech last Saturday to an Italian pro-life organization called Science & Life.

He lamented that many writers had, instead, cherry-picked this single line from his talk: “Letting our brothers and sisters die on boats in the Channel of Sicily is an attack on life.”

In fact, abortion and the boat deaths were just the first two of six different “attacks on life” that Francis listed in mantra-like fashion.

The others were work-related deaths due to faulty safety; deaths caused by lack of nutrition; deaths brought by terrorism, war, and violence; and, finally, euthanasia. All attacks on life, according to Pope Francis.

Presumably, many of the Italian journalists focused on his condemnation of the boat deaths because the immigration and refugee crisis that has contributed to them is a major news story right now.

The conservative American news site, Breitbart, did just the opposite.

“Pope Francis: ‘Scourge of abortion is attack on life’,” was its headline. It then reported only on the pope’s condemnation of abortion and ignored all the rest.

Actually, Breitbart’s real interest, it seems, was to use the Pope’s words as a club with which to beat “the pro abort” U.S. House Minority leader, Nancy Pelosi (D-Calif.), for claiming to be a “mainstream Catholic.”

Here’s a quote from the piece: “On two of the biggest social justice issues of our day—abortion and gay marriage—Pelosi has taken a hard-line stand in direct opposition to Church teaching, something resembling a ‘faithful’ Greenpeace member advocating baby seal killing or an orthodox Jew pushing pork.”

And another: “This past January, Ms. Pelosi said that she knew ‘more about having babies than the pope,’ and that a woman has ‘the right’ to an abortion.”

In case that name doesn’t ring a bell, he’s the former Legionary of Christ who left the priesthood two years ago to marry Liz Lev, the daughter Mary Ann Glendon and mother of the child they had out of wedlock back in 2005.