The First of 50 days in Asia 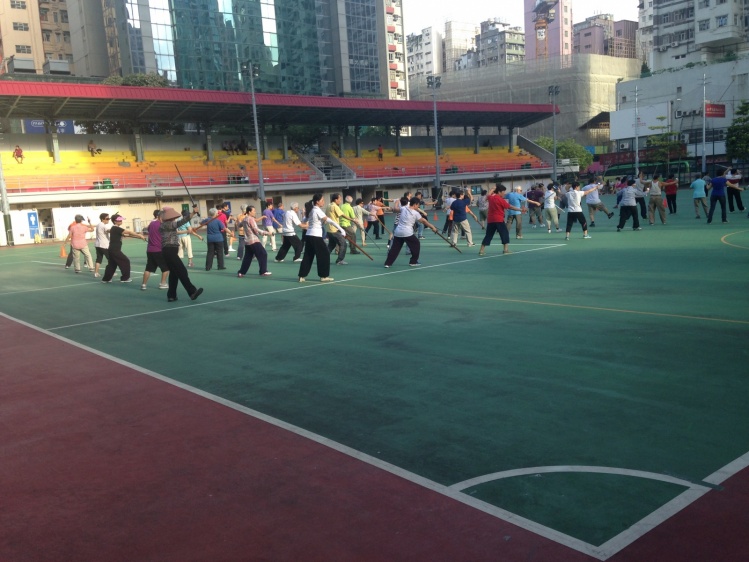 I am on a journey. I arrived here at Wah Yan College last night after a 16 hour fairly smooth flight from Chicago, flying over the Artic. I got here with George Greiner from JST and we are accompanying Lucas's brother and sister as they return home here with their brother's ashes for a burial on June 8th, the day after Lucas' 47th birthday.

This morning Hong Kong was teeming with life. At around 6.45 am I walked around my neighborhood and found groups of older Hong Kong men and women exercising, all in different parks and school grounds, jogging, stretching, playing basketball (I saw four men in their sixties shooting hoops!), but most were doing Tai Chi.  I walked around one small stadium several times, taking pictures of a group of 50-75 year old Hong Kongers, about 60 of them being coached by a colleague wearing a head set.  After a half hour they each went to the fence to pick up their, yes, swords, metal and wooden ones, and resumed their Tai Chi.  Others were watching me, the only white man there, smiling and coaxing me to join them.  "Maybe tomorrow," I replied. They laughed.

About an hour later, I went back toward where I am staying at Wah Yan College, a Jesuit High School that is at the crossroads of Nathan and Waterloo Streets in Kowloon.  The Lutherans and Methodists are right next store.  At this point the next group of people populating the street were hundreds of children in uniform going to school, all remarkably well mannered and well dressed.

Wah Yan was founded in 1924.  It's a very fine school (there's a sister school of the same name on Hong Kong Island).  The Jesuit vision statement for the two schools reads: "We offer a holistic, liberating and transforming Catholic education within a learning community for students and staff to become progressively competent, committed, compassionate, spiritual, and ethically discerning persons with a universal heart contributing to the welfare and happiness of all, in particular the poor and the neglected."

Walking around this sensational city this morning I thought of Dr. Johnson's remark that when a man is tired of London, he's tired of life.  I can't imagine what Johnson would have said were he here this morning in Hong Kong.  I can only hope that his insight would have been more emphatic as he watched the old and the young greet a new day in this glorious city.