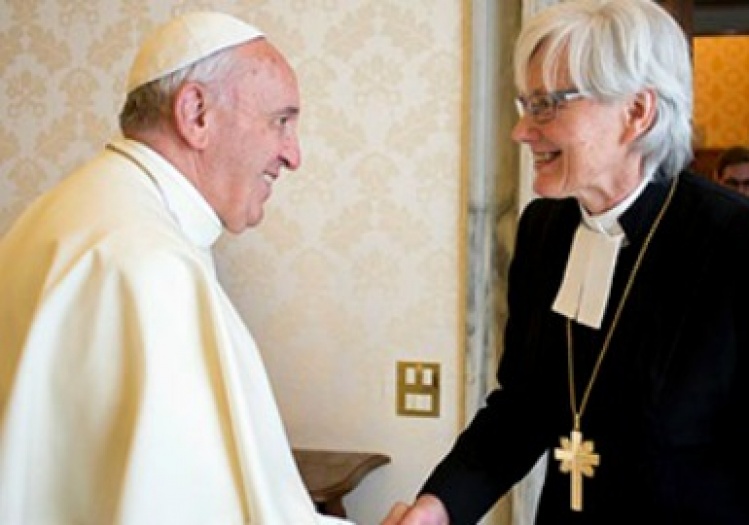 We now have proof that at least one office in the Roman Curia can keep the pontifical secret. Archbishop Rino Fisichella, president of the Pontifical Council for Promoting the New Evangelization, told reporters this week that officials in his department remained tight-lipped for more than six months about Pope Francis’s plan to launch the extraordinary Holy Year of Mercy—which is pretty unusual in the Vatican. The pope surprised everyone at a Lenten penance service in St. Peter’s Basilica on March 13 when he formally announced the Jubilee and said he had entrusted the New Evangelization council with the task of organizing it. At a press conference on Tuesday, Archbishop Fisichella said Francis informed him of the plan at the end of last August. Apparently, very few others knew about it until the very last minute. That includes the regent of the papal household and chief organizer of the pope’s calendar, Fr. Leonardo Sapienza. “I told him a half-hour before the pope entered the basilica on March 13,” the archbishop said. “We found out only two days before [the pope’s] announcement,” said Fr. Ciro Benedettini, vice-director of the Holy See Press Office. And how did the idea for the Jubilee of Mercy arise? Archbishop Fisichella is convinced that it was through the inspiration of the Holy Spirit. He unveiled a calendar of events for the Jubilee year, which will begin with the opening of the Holy Door at St. Peter’s on December 8 and end with its closing on November 20, 2016. He also presented the official logo and other resource material that can be found on a special website. One of the most interesting features of the Holy Year will be the designation of “missionaries of mercy,” a priest in each diocese that will be given the faculty to absolve sins usually reserved to the Holy See. Archbishop Fisichella said his office would carefully select these men in coordination with local bishops. He said it was likely some of the missionaries would be retired bishops and he noted that they could rotate around dioceses in a particular region or country.

For the first time ever a woman bishop has been welcomed inside the Apostolic Palace for an official meeting with pope. But don’t expect to find any photos in the Vatican’s official newspaper. L’Osservatore Romano buried within its pages a brief, picture-less article of Pope Francis’ high-level meeting on Monday with Lutheran Archbishop Antje Jackelén of Uppsala, the first woman to head the Church of Sweden. It seems the Centro Televisivo Vaticano (CTV) and the Vatican’s You Tube channel also tried to prevent any widespread distribution of visual images of the gathering—especially of the pope and Archbishop Jackelén greeting one another. Holy See media that did provide photos for the event generally showed solo pics of the visiting female prelate, although one of Vatican Radio’s departments displayed a screenshot from the CTV footage that showed Francis shaking the archbishop’s hand. In his talk, he addressed her as “Esteemed Mrs. Jackelén, esteemed Sister.”

It should be noted that this was not the first time Pope Francis has had a close encounter with a mitred woman. Last autumn he briefly greeted Bishop Catherine Waynick of the Episcopal Diocese of Indianapolis at the end of a general audience in St. Peter’s Square. There are photos of that event, too. But officials at the Pontifical Council for Promoting Christian Unity, headed by Cardinal Kurt Koch, have downplayed such incidents. It could be that they, like those in the noli me tangere lobby inside the Vatican, are not comfortable with Francis welcoming people that popes usually don’t even meet. Or maybe they’re trying to protect the pope from being further attacked by the most extreme Catholic traditionalists. In any case, the Christian Unity folks followed the same strategy when Francis sent a homemade smartphone video to a conference of televangelists last year in the United States and when, some months later, he met a delegation of TV preachers at his Santa Marta residence.

The process of declaring Junípero Serra a saint is almost complete. Cardinal- and bishop-members of the Congregation for Saints honored Pope Francis’ wishes this week and gave their official approval to the 18th century Franciscan missionary’s canonization. What else could they do? The pope had already announced back in January that he would canonize the Spanish founder of the California Missions during his visit to the United States in September. Even though he originally by-passed the congregation, Francis played the charade of following its procedures on Tuesday when he approved its members’ approval. This came only three days after he visited the North American College (NAC), the U.S. seminary in Rome, for a Mass at the end of a morning symposium on Serra. The colloquium was aimed at addressing “why part of [Serra’s] historical record has been mistreated”, as Carl Anderson, head of the Knights of Columbus, put it. Pope Francis is as aware as anyone that the canonization is controversial. Although he called the symposium and Mass at NAC “a beautiful and meaningful introduction” to his upcoming U.S. visit, it was really the first act of what is sure to be a months-long and forceful campaign by Church officials to defend Serra’s canonization.

And what of the papal visit to the West Point of U.S. Catholic seminaries? This was Francis’ first visit to a Rome-based seminary, and, if it is to be the model for future visits, most rectors will probably not bother to invite him. The Pope basically came to use the NAC chapel. He spoke only in Italian (why not Spanish?) and only of Junípero Serra. He did not have time for even a brief, private gathering with the 250 immaculately groomed and tailored seminarians, nor did he accept their invitation to stay for lunch. He actually spent more time with the eight cardinals and six bishops that concelebrated the Mass with him. The only thing Francis saw of the Good Ship NAC, other than its chapel, was the student-lined corridor he traversed from the building’s entrance to the sacristy. But the Knights of Columbus, or some other benefactor, will no doubt make sure that a nice marble plate is commissioned to commemorate the historic day.