Let Him Speak, and Let the Debate Go On
By The Editors
Pope Francis
Secularism and Modernity
Editorial
Synod on the Family
Theology 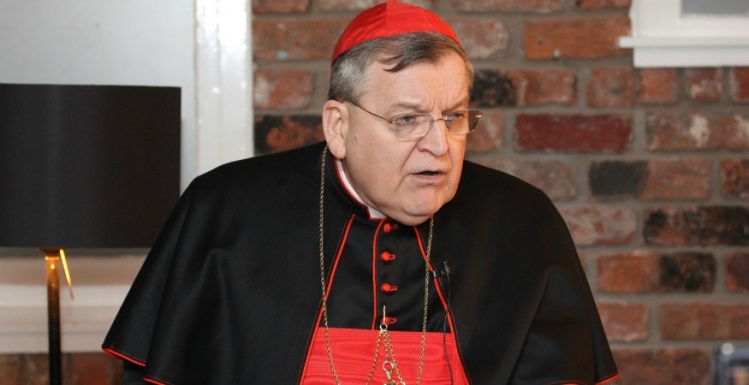 Schadenfreude can be a grave temptation and, if not resisted, a serious sin. There are some, both inside and outside the church, who have taken a certain glee in the fate of Cardinal Raymond Burke. Burke, the former archbishop of St. Louis, first made a name for himself as one of the American hierarchy’s most outspoken conservatives and energetic culture warriors. He came to national attention for warning that he would refuse to give Communion to Democratic presidential nominee John Kerry. A canon lawyer, Burke argued that denying Communion to prochoice Catholic public officials was a cut-and-dried issue. He understands most things to be cut and dried. That is not, however, how Pope Francis sees things, and the pope has taken steps to sideline the cardinal. Last year Burke was removed from the Vatican’s Congregation for Bishops, and just last month he was relieved of his duties as head of the church’s high court. Instead, Burke has been given the ceremonial title of patron for the Knights of Malta.

Burke has not taken his removal from the centers of influence in Rome quietly. He has been perhaps the most outspoken critic of the recent Synod on the Family, repeatedly charging that the synod’s discussion of homosexuality, cohabitation, and the readmission of some divorced and remarried Catholics to Communion has sown dangerous “confusion” among the faithful. The church under Pope Francis, the cardinal warns, “is like a ship without a rudder.” Burke insists that what the church has taught about homosexuality and marriage is unchanging and unchangeable. Look it up in the Catechism, he urges.

Popes are free to staff the Vatican with whomever they think best suited to steward the church and implement whatever program of retrenchment, stasis, or reform is needed. Burke’s vision for the church calls for a defensive and rejectionist posture toward the modern world. Francis clearly thinks that strategy will result in a further eclipse of the gospel and marginalization of Catholicism. The pope’s aim is to steer the church away from the culture wars and toward a joyful engagement with Catholics and non-Catholics alike. “Joyful” is not the first word that comes to mind when listening to Cardinal Burke. Many find Francis’s openness a promising departure from the last two pontificates, while a vocal, entrenched minority, identifying themselves as the “orthodox,” see papal initiatives like the Synod on the Family as a kind of betrayal. Some, including Burke, speak darkly about the possibility of schism.

We come to praise Cardinal Burke, not to vilify him. As Burke’s apologists like to point out, Pope Francis asked the bishops to speak frankly, and that is what Burke has done. Good for him. Much of what the cardinal says is unpersuasive and unappealing, but he is not wrong to insist that doctrinal continuity and coherence are essential to the integrity of the church’s witness. Nor is he wrong to remind us that knowing we will be held to high moral standards helps us live good lives.

Yet Burke sets the wrong course for the church by insisting that the questions taken up in the synod were settled centuries ago and need never be revisited. His fear of foisting “confusion” on the faithful is misplaced, especially his claim that no good can come from what the church has traditionally taught are disordered and gravely sinful acts and relationships. That gets the contemporary moral dilemma backwards. Given what the church teaches, what is perplexing for the faithful is the goodness evident in the lives of many divorced and remarried Catholics. Much virtue is also apparent in the loving relationships of same-sex couples, especially in their devotion to their children. Goodness, after all, is properly understood as a grace and a mystery. What is confounding is finding it in places where the church—or at least Cardinal Burke—claims it cannot exist.

Burke will now have more free time to challenge those who think it imperative that the church reconsider the status of the divorced and remarried as well as the nature of homosexuality. And he should. These are not questions that demand a rush to judgment. But if the cardinal wants to be credible, he should refrain from pretending that all church doctrine was cast in stone two millennia ago. The moral questions Catholics face today are as real and as difficult as those faced by the apostles; pat answers did not work then, and will not work now. “We shall find ourselves unable to fix an historical point at which the growth of doctrine ceased, and the rule of faith was once and for all settled,” Cardinal Newman wrote. Bishops should deepen, not simplify, our understanding as well as our faith. Change need not be betrayal. Let the cardinal be heard, and then let the debate continue.