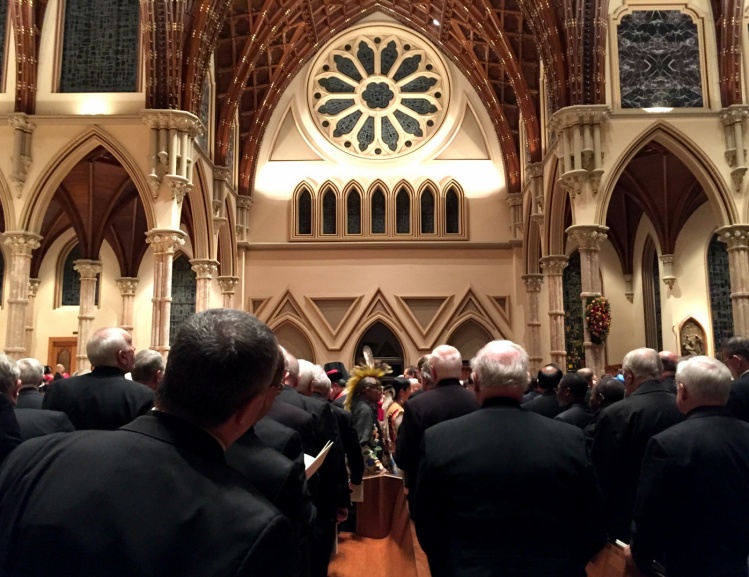 CHICAGO -- The sea of black rose last night as the procession music began: a spiritual, complete with drums and tamborine and energetic choir, a Spanish hymn, followed by another spiritual. The mostly clerical congregation turned toward the rear of the church as the third selection came to a close. "Plenty good room," the chorus sang, "just choose your seat and sit down." The assembled stood in silence, waiting for the new archbishop to seek admittance to Holy Name Cathedral. He knocked three times. The sound echoed through the church, the bronze doors were opened by Msgr. Dan Mayall, pastor of the parish, and Blase Cupich entered what was about to become his cathedral. He was met with uproarious applause.

"All Are Welcome," accompanied the procession, as ecumenical and interrelegious guests moved up the aisle, impressing the assembly with their traditional dress--the colors popping bright against the surrounding black suits. Cupich ascended the sanctuary steps, and turn to face the church. His face took on a look not too dissimilar from the expression on Pope Francis's face when he first appeared on the balcony of St. Peter's. But if the congregation sensed trepidation in his countenance, it was dispelled as soon as he saw Cardinal Francis George approach. Cupich smiled broadly, extended his arms toward the cardinal, and applauded emphatically. The whole church joined him.

After Cardinal George took his seat--the cathedra wasn't Cupich's just yet--the incoming archbishop greeted a series of local leaders, secular and not. Mayor Rahm Emanuel was first. Others followed: outgoing Illinois Governor Pat Quinn, Fr. Robert Barron (rector of Mundelein Seminary), Episcopal Bishop Jeffrey Lee, ninety-eight-year-old Rabbi Herman Schaalman (close friend of the late Cardinal Joseph Bernardin), and several others. It wasn't mere flesh-pressing. Cupich took his time with everyone who approached. Last to greet him was Fr. Louis Tylka, chair of the presbyteral council, who invested Cupich with the archdiocesan stole. As the two spoke, their laughter could be heard above the choir.

Cupich preached on Ezekiel's vision of the Valley of Dry Bones, in which God takes the prophet through the skeletal remains of his people, asks whether these bones can live, has him command them to hear the word of God--and they rattle back to life. He acknowledged the dryness of the church, the city, the nation: uncivil discourse, rampant violence, struggling mothers, disaffected youth, disenfranchised immigrants. Where is God in all this? "God is at work in giving people a life of stability, a feeling of being at home, and of living in an environment that satisfies the desires God has placed in their hearts." He continued: "The work of comprehensive immigration reform is not important because it is on my agenda, but because it is on God’s." Cardinal George nodded in agreement.

"We are a city that is unafraid to walk through the dry bones," Cupich said. It will have to be. From the 2006 scandal of Daniel McCormack, the now-laicized pedophile, to recent budget cuts and school closings, Chicago Catholics are hurting. The archdiocese is still working through civil suits brought by alleged victims of McCormack, and it has already paid $130 million to victims of abuser priests. Last month Cardinal George announced that nine Catholic schools would be closed, and two would be reorganized. Just last year the archdiocese closed five other schools, cut chancery staff by 10 percent, and announced a three-year ban on loans to parishes. These cuts were necessary, the archdiocese argued, the Chicago Tribune reported, because the archdiocese has been running deficits of tens of millions of dollars over the past few years. In 2012, it was $40 million in the red.

Yet, Cupich said, "that is where God is"--traveling through this valley with his people--"and where God’s agenda begins." He continued: "I recognize the enormous opportunity and promise that God is putting before us as we use our connections to help the disconnected, all the while respecting each other’s challenges.... We will probably end up rattling some bones."

Before the final blessing, Msgr. Mayall invited everyone in the congregation to meet Cupich personally. But, he cautioned, "no selfies." With that, the choir struck up the recessional--another African-American spiritual: "These bones, these dry bones. O hear the word of the Lord." Feet tapped, hands clapped. Some cheered, gave an amen. And as the cathedral emptied, workmen readied the cathedral for today's installation Mass. They carried the cathedra to its usual spot at the top of the church. They helped pack up bongos and cymbals. And from the apse of the cathedral they removed Cardinal George's coat of arms.