Open Debate at the Synod
By The Editors
Synod on the Family
Bishops
U.S. Catholicism
Pope Francis
Editorial
LGBTQ issues 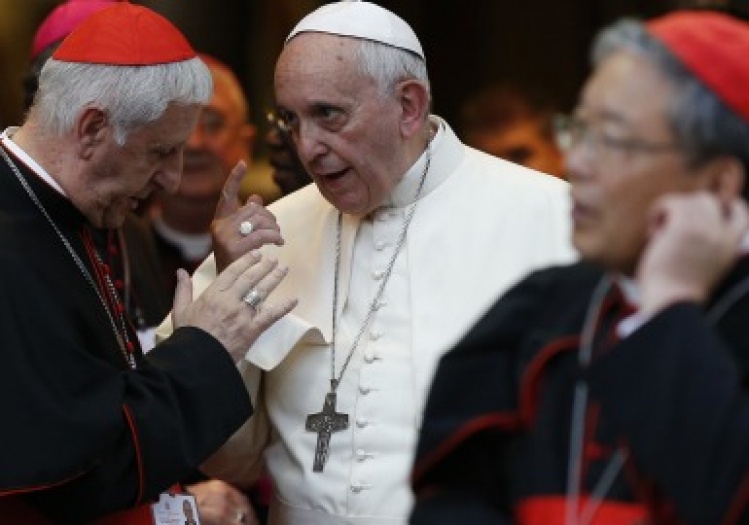 "Speak frankly,” Pope Francis said at the opening of this month’s Extraordinary Synod on the Family. “Let no one say, ‘I can’t say this. They’ll think such-and-such about me.’” That isn’t how synods used to be. Under past popes, the Vatican tightly controlled the agenda. Bishops were warned not to bring up certain issues, such as married priests and contraception. But Francis wanted something different this time. He encouraged participants—mostly bishops, but also select priests and laypeople—not to fear openly disagreeing with one another, or with him. If nothing else new comes out of what will be a yearlong synodal process, that change alone constitutes a major accomplishment.

Encouraged to speak freely, the synod fathers did not hold back. Several bishops supported readmitting some divorced and remarried Catholics to Communion, something the pope reportedly favors; others opposed that idea, claiming it would entail a dangerous change in church teaching. Some participants spoke of valuable elements in “irregular” relationships, including those of gay couples, the divorced and remarried, and couples who cohabitate before marriage; other participants worried that could suggest support for what the church has traditionally condemned as serious sins. In other words, the pope got the frank discussion he asked for—and then some.

When the Vatican released a report, a text known as a relatio, summarizing what the bishops had been debating during the first week of the synod, it was big news. And that news was cause for serious alarm among some conservative Catholics. Cardinal Raymond Burke and others mounted a public campaign of resistance to the notion that the synod would liberalize church practice. They argued that even discussing subjects like Communion for the divorced and remarried would confuse the faithful and lead the church down a slippery slope to heresy. Burke reportedly told the synod there could be no change in doctrine, no change in canon law, and no change in pastoral practice. Instead, he urged the pope to issue a statement affirming Catholic doctrine on marriage. By failing to do so, he alleged, Francis had “done a lot of harm” to the church.

When the final version of the relatio was made public at the end of the synod, the welcoming language regarding homosexual people and the divorced and remarried was gone. In its place were two paragraphs blandly summarizing the disagreement of bishops on those issues, and one repeating Vatican statements on homosexual orientation. Yet even those did not receive the two-thirds majority vote required for approval. News reports announced that conservatives had succeeded in watering down the first draft of the relatio and altering the direction of the synod.

The reality is more complicated. First, the three paragraphs that failed to get approval were still supported by large majorities. Second, some synod fathers say that they didn’t endorse the paragraph on gay people because it did not go far enough. Presumably, others feel that way about the sections on divorce as well. Third, Pope Francis decided to publish the entirety of the relatio—including the sections that did not receive two-thirds support. That version of the text has been returned to the world’s bishops conferences for further study by clergy and laypeople alike. These contested issues are very much alive.

Some liberals have suggested that when the synod reconvenes next October, the pope ought to remove some of the more conservative participants and simply push through progressive reforms on his own. But that would not be in keeping with the pope’s collegial vision for decision-making in the church. In moving the church forward, Francis’s goal is to bring together as much as possible the various factions within the church. He welcomes a variety of views because he believes that no one person, no one ideology, has a monopoly on truth—not even the pope. Unlike some of his critics, he believes that candid disagreement, charitably expressed, can be fruitful. He knows real unity often requires persuasion; it cannot be forced or faked. He knows that open debate is not the same thing as confusion.

“We still have one year to mature,” Francis said in his remarks closing the synod, “to find concrete solutions to so many difficulties and innumerable challenges that families must confront; to give answers to the many discouragements that surround and suffocate families.” Finding those answers is not the job of the bishops alone, but of the whole people of God. There is much work to do, and the synod is just the beginning.