If He Is One, What Kind Is He?
By Michael Peppard
Pope Francis
U.S. Catholicism
Religious Life
LGBTQ issues
Secularism and Modernity
Vatican II
Web Exclusive 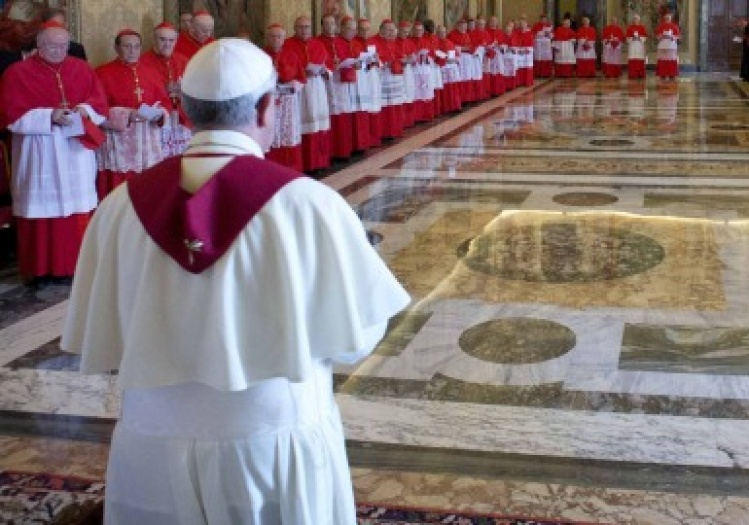 Does it make any sense to call Pope Francis a liberal? For that matter, should any faithful Catholic—a word that means “universal”—be described as “conservative” or “liberal”? Or does the use of these terms necessarily involve the misapplication of essentially political concepts to a religious community? Does their use inevitably divide and polarize the Body of Christ?

Matt Malone, SJ, the editor of America, recently announced his magazine’s new editorial policy of avoiding the words “liberal” and “conservative” in discussions about the church:

America understands the church as the body of Christ, not as the body politic. Liberal, conservative, moderate are words that describe factions in a polis, not members of a communion…. The church in the United States must overcome the problem of factionalism. This begins by re-examining our language. America will no longer use the terms “liberal,” “conservative” or “moderate” when referring to our fellow Catholics in an ecclesiastical context.

In a response to Malone, the editors of Commonweal insisted that “factionalism can indeed be a threat to the church (or to the country), but honest disagreement is not always destructive of ecclesial communion; in fact, it is often constitutive of it…. American Catholics belong to the church, but also to many other communities and organizations. They cannot, and should not, leave those attachments behind at the church door.” Commonweal’s editors suggested there was no contradiction between a fundamental commitment to the Catholic Church and describing oneself or one’s causes as liberal or conservative.

Then along came the interview with Pope Francis, published in America and other Jesuit publications around the world. Almost as soon as it appeared, the word “liberal” began to be applied to the pope himself. In Slate, William Saletan published an article titled “Pope Francis is a Flaming Liberal” (later tastefully trimmed to “Pope Francis is a Liberal”). Mark Silk of Religion News Service picked up on the debate and listed ten reasons why he agrees with Saletan. But Melinda Henneberger of The Washington Post agrees with Malone:

No, no, no: What Francis is saying is not that liberals are up in Rome right now and conservatives are down—haha, now see how you like it!—but on the contrary that labels and tiny little boxes have no place in a faith that is so much bigger than that. Francis is not a “right-winger,” but he’s not a winger at all.

For my part, I think one of the common meanings of “liberal” does apply to Pope Francis. In a short piece in the Washington Post’s “On Faith” blog, I responded to the debate fomented by Saletan by focusing on the pope’s temperament: “While Pope Francis does not share all the convictions of liberal Catholics, he is temperamentally as liberal as any pope could reasonably be.”

My Fordham colleague Charles Camosy disagreed with me:

The use of “liberal” and “conservative” labels in our public discourse is so imprecise (and open to misinterpretation) that we ought to resist using such terms as often as we can—especially in a religious context. Rather than a good-faith attempt to name something that is true, use of these labels is often designed to marginalize and “other” a person or group.

Point taken. But isn’t this really an argument for using these terms more precisely and thoughtfully than they are often used in the dominant discourse of the media? There’s no reason to give up on a term just because it needs definition and qualification. Yes, the “liberal” in liberal theology means something different from the “liberal” in liberal political theory, and liberalism means one thing in the United States and another in Europe. But while it is tempting to avoid terms that lend themselves to equivocation, “liberal” and “conservative” are the words we actually have to describe a whole host of things for which we lack other, more adequate words that everyone could be expected to understand.

So what is it that people perceive in Pope Francis that makes them think he is a liberal? Apart from the headline-grabbing remarks about sexual ethics, which were only a small part of the interview, what else about this pope has attracted the attention and sympathy of liberals? In my view, the answer is Francis’s temperament. A temperament is not an ideology, much less a policy program, but it is nevertheless central to one’s engagements with political bodies and other institutions. A liberal temperament is what TV personalities such as MSNBC’s Chris Hayes and The Daily Show’s Jon Stewart saw in Pope Francis, even before the America interview appeared. And although Andrew Sullivan is a self-described conservative, it seems to be the pope’s temperament to which Sullivan has responded so enthusiastically on his blog.

There’s more than one way to define the liberal temperament. I’d define it as a temperament that tends toward open-ended thinking and is generally confident in humanity’s ability to achieve progress in the near future. A liberal temperament is comfortable with spontaneity, ambivalence, and ambiguity. Some people have all of these qualities, some only a few. In any case, one can have a liberal temperament without subscribing to the political or theological positions we commonly describe as liberal. Almost by definition, a liberal temperament does not lead to predictable ideological outcomes.

For Alan Wolfe, the liberal temperament “has more to do with psychology than politics or morality.” It is fundamentally “impatient with arguments rooted in fear and self-protection.” A person with this temperament remains consistently “open to a sense of discovery, anticipates the future with excitement, and approaches the world with generous spirit.” Such a temperament is “trans-ideological,” and those who would identify themselves as liberals often lack it. (As Wolfe observes, “No one is more temperamentally conservative than a Manhattan leftist living in a rent-controlled apartment and holding tenure at a university.”)

In terms of temperament, Pope Francis almost always sounds liberal in what he says, and his actions have reinforced that impression. He argues against those who “want everything clear and safe,” those who “always look for disciplinarian solutions,” and those who “stubbornly try to recover a past that no longer exists.” He has harsh words for anyone who desires “to establish order in the sense of pure conservation, as a defense." He insists that “we must not focus on occupying the spaces where power is exercised, but rather on starting long-run historical processes.” As for his actions, Pope Francis spontaneously departed from how a pope is supposed to behave several times in the first days of his pontificate.

The traits of a liberal temperament are not always positive. Spontaneity, ambivalence, and impatience with The Way Things Have Always Been Done can sometimes lead to disaster. Tradition, Chesterton’s “democracy of the dead,” is usually wise and true. Many fears are valid. And a “generous spirit” can be a euphemism for “gullible.”

Regarding the pope’s temperament, the conservatives Rod Dreher and R. R. Reno have both expressed some misgivings. Reno believes that the pope appeared “naive and undisciplined” in some parts of the interview, and that he should have anticipated the way secular liberals and dissenting Catholics would make use of his remarks. Reno describes some of the pope’s rhetoric as straight “from the standard playbook of progressive reform.”

The conservative Washington Post columnist Michael Gerson also recognizes that the pope’s temperament is not exactly conservative: Gerson describes the pope as “subversive,” “disarming,” “disruptive”; as a “troublemaker,” “radical,” and “reformer.” But Gerson is not worried. Indeed, he believes that Francis is reclaiming one of the oldest traditions of what it means to be a Christian: “When the church becomes ossified, legalistic and hypocritical—as all institutions periodically do—it is the radical reformers who carry on its most authentic tradition.” Gerson concludes by emphasizing Francis’s “personalism”:

This teaching—to always consider the person—was disorienting from the beginning. The outsiders get invited to the party. The prodigal is given the place of honor. The pious complain about their shocking treatment. The gatekeepers find the gate shut to them. It is subversive to all respectable religious order, which is precisely the point.

Like Gerson, I see a connection between Pope Francis’s temperament and the personalism of Jesus’ own ministry. Francis does not emphasize dogma, but he does have one “dogmatic certainty”:

“God is in everyone’s life. Even if the life of a person has been a disaster, even if it is destroyed by vices, drugs or anything else—God is in this person’s life.” This attitude imitates that of Jesus, whose example of holiness had more to do with personal encounter than with rules.

Pope Francis’s approach also bears some resemblance to that of St. Paul. Like Paul, Francis emphasizes “finding new roads” at the “frontiers, margins, and horizons.” This brings us back to Commonweal’s response to America’s warning against factionalism: “Paul took on Peter in the most direct way on the question of whether the promises of Christ could be extended to the uncircumcised. The church as we know it would not exist but for that bit of factionalism.”

Notwithstanding his famous zeal, Paul’s temperament was liberal to the core. He traveled all over the Mediterranean with little personal security, constantly attracted the anger of various authorities, improvised his method in every city, and adapted his preaching to the cultural contexts of different audiences. Most significantly, at the end of his long career, he remained positively and beautifully ambiguous about the defining feature of his life: the how of God’s plan to redeem all people, both Jews and Gentiles (Romans 11).

I do not mean to elevate Paul over James. But I am willing to say that, temperamentally, James was a kind of conservative and Paul a kind of liberal. They were both committed to Christ, committed unto death. But they expressed that commitment in different ways. They were both achieving God’s work in the world, extending the Body of Christ like two hands—a right and a left.

Christian unity does not demand that we blur the differences between leaders, whether James and Paul or Benedict and Francis. We can borrow words common to the polis and use them, with care, to describe realities within the ecclesia, just like first-century apostles did. What Christian unity does demand is that we remain open to the influence of those whose temperaments are different from our own.