Reading the Mission of a Magazine
By The Editors
U.S. Catholicism
Domestic Affairs
Editorial
Election 2012 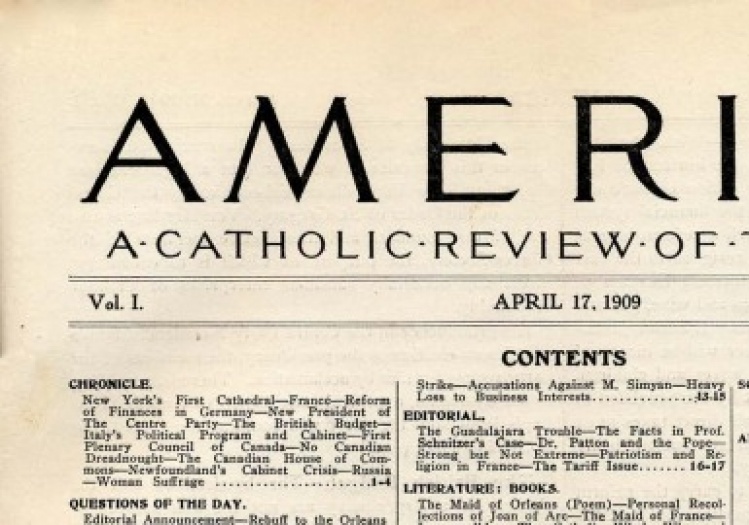 Magazines of all sorts have been struggling to find their way in the digital age and in an increasingly fragmented cultural environment. Journals, like Commonweal, that have a special relationship to Catholicism, or to some other religious tradition, are no exception. Subscribers to established journals of opinion tend to be older, and this seems especially true for magazines such as Commonweal, Christian Century, America, First Things, and the National Catholic Reporter. But it is also true for the New York Review of Books, the Nation, National Review, and even for circulation titans like the New Yorker. Attracting a new generation of readers and supporters is crucial to the survival of the sort of vigorous opinion journalism and political debate traditionally fostered by “little” magazines. And so, preserving a magazine’s identity while communicating a compelling vision of its purpose and future may be more important today than ever before.

In that context, it has been particularly interesting to read the mission statement of Matt Malone, SJ, the newly appointed editor of America, about the challenges facing his magazine and the Catholic media at large. In “Pursuing the Truth in Love: The Mission of ‘America’ in a 21st-Century Church,” Malone makes a compelling case for America’s unique character as a Catholic ministry as well as a forum for intellectual and theological deliberation. It is refreshing to come across such a passionate declaration of how a magazine like America should meet its twin obligations of illuminating church teaching while at the same time welcoming the discordant views of Catholics themselves on issues both political and theological or ecclesial. In tackling that problem, Malone is especially concerned with the politicization of the church. He attributes this, at least in part, to what he characterizes as a “body politic sickened by the toxin of ideological partisanship” and a “public square [that] has less space for overtly religious perspectives than at any previous time in American history.”

Even allowing for rhetorical emphasis, that analysis of the broader political situation seems both overdrawn and incomplete. Politics, as the saying goes, ain’t beanbag, and partisan strife is more the rule than the exception in American history. Nor would anyone who watched even a few of the Republican Party’s interminable 2012 presidential debates conclude that religion—and specifically Christianity—had little purchase on our common political life. If religious voices have been marginalized in the way Malone suggests, it is sobering indeed to be reminded that Catholics are the largest self-identified religious group in Congress—making up 30 percent of the House of Representatives. Something more than partisanship must explain why the church’s views fail to gain traction with the larger public, let alone with those in the pews. Yes, hostility to Catholicism exists in certain media, academic, and liberal quarters, but an openly antagonistic attitude toward religion remains a sure road to political oblivion in this stubbornly religious country. America’s mission statement is silent about which party and what politics might be more responsible for those partisan toxins. Pronouncing a plague on both political parties ignores the fact that it is currently a faction within one party, the GOP, that is doing everything in its power to obstruct the operations of government, a situation that has even Republican leaders perplexed and paralyzed.

Malone’s more pressing concern is with what he perceives to be the destructive influence of secular political ideology on Catholic unity. “We view ideology as largely inimical to Christian discipleship,” he writes, arguing that “our secular, civic discourse...is a mortal threat to the ecclesiastical discourse.” In an effort to combat this “factionalism,” America will no longer allow writers to use the terms “liberal,” “conservative,” or “moderate” “when referring to our fellow Catholics in an ecclesiastical context.” That editorial experiment will bear watching.

Factionalism can indeed be a threat to the church (or to the country), but honest disagreement is not always destructive of ecclesial communion; in fact, it is often constitutive of it. As John Courtney Murray, SJ, once wrote, “disagreement is a rare achievement, and most of what is called disagreement is simply confusion.” Paul took on Peter in the most direct way on the question of whether the promises of Christ could be extended to the uncircumcised. The church as we know it would not exist but for that bit of factionalism. The number of such disagreements throughout the church’s history is hard to exaggerate. In fact, church unity is more often threatened when not enough room is made for the airing and resolution of honest disagreement. Nor does it do any good to pretend that the contemporary church is actually a community of harmony and virtue simply because ideally it should be. American Catholics belong to the church, but also to many other communities and organizations. They cannot, and should not, leave those attachments behind at the church door, nor should they regard their political commitments as peripheral to their Christian witness. Quite the contrary. For example, while America’s mission statement confesses a “bias” for the “preferential option for the poor and vulnerable,” it asserts that the poor have no “special parties to speak for them.” Maybe not, but that doesn’t mean that all parties speak for the poor equally, or equally well.

“Pursuing the Truth in Love” is a bracing and welcome call to Christian discipleship, but it tends to draw too stark a dichotomy between a Catholic’s religious identity and his or her secular political responsibilities. Malone, for example, refers to “the tired, quadrennial debate about which presidential candidate represents the lesser of two evils.” The dismissive tone about electoral politics is striking. Millions of politically engaged Catholics, on both sides of the ideological fence, still believe that democratic politics is about a good deal more than the lesser of two evils, and that political involvement, despite its compromises, is no obstacle to Christian discipleship. Tiring of the messy trade-offs of politics is understandable, but it’s no answer to our discontent, for history has issued a sure warning that the alternatives to democratic discord are far worse. The nation’s current political impasse calls for a renewed commitment to the practice of politics, not to Christian detachment. The Catholic Church has been too eager to despair of representative democracy in the past, and must be ever vigilant in guarding against that temptation today.

Malone writes that “our principal point of reference is not civil society, and it is not the state,” but rather the gospel. Amen. Yet a principal point of reference does not preclude other morally binding commitments. In making the gospel known, Christians will most often act as members of civil society and citizens of the state. Not just as Americans, but also as Catholics and Christians, we have a large stake in the success of our democracy. Historically, the churches have played an indispensable role in compelling the liberal state to live up to its promises about human dignity and freedom, whether the issue was slavery, civil rights, eugenics, economic opportunity and fairness, abortion, religious freedom, voting rights, gender equality, or war. As the commemorations of the 1963 March on Washington remind us, the language of social justice, which is fundamental to biblical religion, is essential to the health of democracy itself.

Criticizing the theologian Stanley Hauerwas’s radical critique of American democracy in these pages, the philosopher Jeffrey Stout insisted that the churches condescend to or retreat from the political realm at their peril. “Christians have every reason to concern themselves with the integrity of the church and with the question of what way of life it is meant to exemplify,” he wrote (“Not of This World,” October 10, 2003). But that focus should not entail an escape from the duties of citizenship or from the influence serious Christians can wield in their roles as government and business leaders. “Christian ethics has traditionally taken all of these roles as falling within its scope, and made it its business to evaluate existing social arrangements in light of stringent standards of justice and love,” Stout wrote.

In pursuing the truth in love, those stringent standards should apply both within the Catholic community and beyond it. Ideology is not always the enemy of Christianity; liberal democracy is an ideology itself, and it represents not a threat to the church but a welcome and necessary partner. There is no need to choose between fidelity to Christ and our secular democratic hopes. That at least has long been part of the mission statement of this magazine.