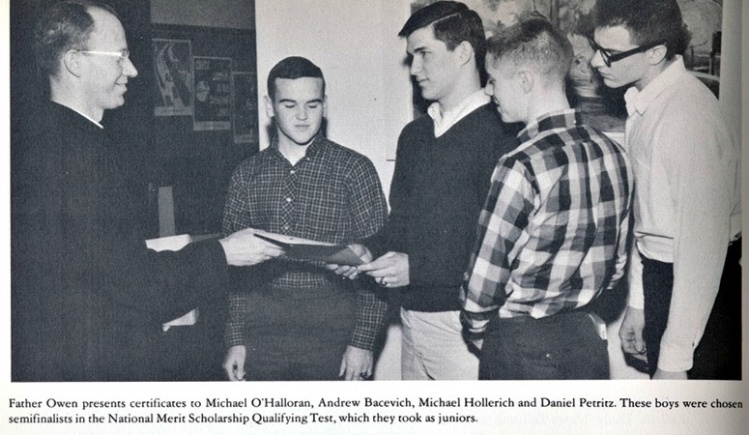 Fiftieth-year high-school reunions are not for the faint of heart. To encounter classmates last seen a half-century prior is necessarily to come face to face with all that infirmity, weight, and the ravages of age can inflict upon the human body. Just as their youthful vigor was once yours, so too is their decline, acutely visible, even if not equally apportioned. Attend such an event and you’re looking into a mirror that magnifies all that you’d prefer to ignore.

Our particular school, founded back in 1890, possessed greater character than distinction. With an all-boys student body, a mix of boarders and day students, it sat at the every epicenter of “flyover country”—nestled amid cornfields just off Route 6, well beyond the far western reaches of Chicagoland.

Apart from a virtually unchanged physical plant—old in our day, now positively antique—that school no longer exists. Taking its place while retaining its name is a co-ed institution consisting entirely of day students. Well, not entirely: to augment an inadequate revenue stream, the academy recently reconstituted a very small boarders program aimed at the Asian market—youngsters seeking eventual entrée to an American college or university. Tuition-wise, they get to pay a premium.

Although the composition of the student body marks the most obvious change, it is not the most important. Ours was a monastery school; theirs is a school situated alongside a monastery. Our teachers were Benedictine monks. Theirs are lay people.

With a single (memorable) exception, every one of my teachers during four years of high school had been a Benedictine priest. Of course, back then the abbey community numbered more than seventy. In age, energy, aptitude, and temperament, its members varied widely, but most were in their prime—considerably younger than I am now. Today a mere sixteen monks remain, nearly all quite elderly. Only a handful retain sufficient vigor to engage routinely with students.

For those of us who were boarders, teaching only begins to describe the role that monks played in our lives. Whether in dorms, study halls, refectory, or chapel, we were under their constant charge.

They, in turn, interested us intensely. Although we were not of them, daily exposure to their virtues, flaws, and peculiarities positioned us to take their measure. Now and then—for example, when attending the funeral rites for one of their number—we gained a glimpse of their communal spiritual life. In ways that I can only now fully appreciate, living in proximity to these godly, if necessarily imperfect men had a profound effect on my own understanding of sin and redemption, human frailty and human generosity. That, absent an extraordinary revival of monasticism, this unique approach to Christian formation is gone for good represents a small but not inconsequential sign of cultural decline.

The classmates who lived on campus and those who came and went on a daily basis inhabited separate but adjacent worlds. Between those worlds was a permeable boundary. Not unlike, say, the U.S.-Canadian border, visitors streamed back and forth, with cordial welcomes extended on both sides. Yet separate identities remained intact. We were not them and they were not us. Caught sneaking out for an illicit beer on Friday night, they might get grounded. We got expelled—forget about second chances.

Yet as the class gathered after the passage of fifty years, such distinctions had blurred. For its part, the academy treated us as an undifferentiated collective. In ceremonies held in the gym, it inducted our baseball team into the school’s hall of fame (like most such “halls,” it’s a facility existing only in the virtual world). At halftime during the homecoming football game, cheerleaders, perkier and more acrobatic than those we remembered, ushered us onto the field and performed in our honor. At Mass the following morning, each classmate in attendance received an old brick, said to have been part of the school’s original building and symbolizing our ascent to the revered status of Golden Bedans.

However appreciated, such gestures were peripheral. Our main interest was not to elicit applause or to collect mementoes but to reconnect. This occurred in various off-campus settings where eating and drinking offered an excuse to reminisce. Here our common inheritance came to the fore, as former boarders and former day students alike resurrected stories about notably idiosyncratic monks and coaches and recalled especially brazen pranks usually pulled off on those rare occasions when we escaped from the prefect’s watchful eye.

Yet I could not help but notice that the chitchat by and large skated along the surface. Rather than the meaning of life and the prospect of death, exchanges tended to focus on grandchildren, golf, joint pain, and the timing of retirement. No politics. Next to no religion. Baring one’s soul was not on the weekend’s agenda.

Although we’ve not yet reached the biblical three score and ten, fully one-fifth of our classmates have already passed on. These we remembered at a prayerful memorial service. Of those who remain, nearly half turned out for the reunion. Those choosing to make the trek—among them priests, lawyers, educators, and academics, plus others who had found employment in the hurly-burly world of making, buying, and selling—seemed happy enough to be there. What the non-attendance of the remainder signified—poor health? antipathy? ennui? a lack of funds?—was for the most part impossible to say.

Catching up with classmates I had once known well, some even intimately, left me with a sense of men reconciled with their lot. For a few, life may have followed the course they had envisioned back at age seventeen or eighteen. Most, however, had accumulated their fair share of scars as casual references to subsequent marriages, abrupt career changes, and medical emergencies suggested. For some, long-ago service in Vietnam seemed not so long ago.

Yet gone (or at least hidden from view) was the restless competitiveness, the sensitivity to perceived slight, and the preoccupation with self that make male adolescence such a trial. The passage of time—or perhaps changes in hormonal balance—had washed away the worst aspects of narcissism. Ambitions were sated—or had been abandoned. We had become old.

In the midst of the scheduled festivities, two of my classmates suggested that we break away to visit the abbey cemetery. Walking through the final resting place of the monks to whom we owed such a debt of gratitude, we spoke their names aloud in recognition and respect. It was a good way to say thank you and goodbye.