Last Word: Kids in the Kingdom 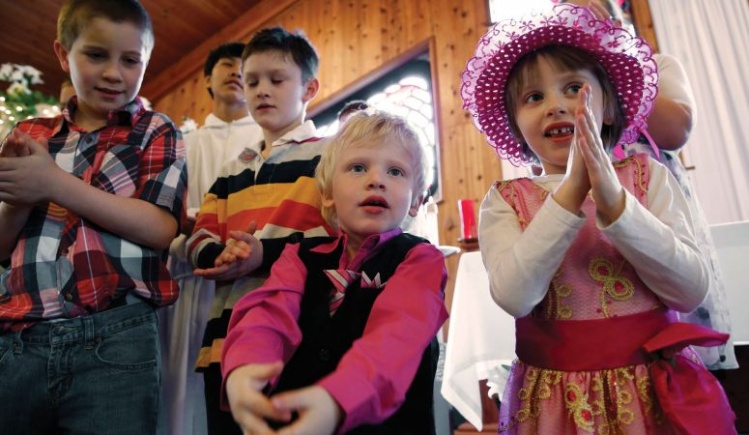 My liturgical tastes used to tend toward the simple, but they’ve recently turned toward the chaotic. That’s because I’ve come to experience the Mass through my almost-three-year-old son, who has taken a keen and devout interest in all things liturgical. Before he goes to sleep, my wife and I will hear him sing “Alleluia” in his room. During the day, he will often take the broom from the closet, hold it over his head, say it’s a cross, and urge me to follow him in procession. When he finds a round piece of bread he tells me and my wife that it’s Jesus and solemnly offers it to us. (Lest you think he’s too advanced, I should add that he then offers us his cup of water and tells us to have some water.)

We recently moved to Chicago, and have ended up at a parish with many young families. At the 10:30 Mass, mine isn’t the only toddler singing “alleluia” at inopportune moments or wandering around the church with both determination and joy. After Mass you see young parents chasing their children and slightly older parents looking bemused, knowing the kids can’t get too far. In any event, it’s easy enough to find the children. They tend to congregate around statues of Mary or around the piano to hear the music director play some Bach after Mass. Perhaps they’re running around the sanctuary or walking up the stairs of the pulpit or telling stories to the older members of the parish who can’t get enough of them. And at some point they’ll be sure to give the priest a high five.

My son’s liturgical tastes have taken shape just as his metaphysical questions have started. “Why?” falls from his lips even more often than “alleluia” does. I can explain to his satisfaction why different trucks have different parts. At other times, though, my answers leave him—and me—unsatisfied. I’ve found that he asks his most curious questions and receives his least satisfying answers when we are at Mass. “Why does the priest say ‘God bless you’?” “Why do Mommy and Babbo eat Jesus?” “Who is God?” These are all properly theological questions, which means they push up against the boundary between what can and cannot be said.

I thought I might find some insight in Scripture, and so I turned to the New Testament to see what it had to say about children. Paul makes some remarks about childhood and maturity in 1 Corinthians (14:30), but the most famous and most helpful remarks about children come from the gospels. In the Gospel of Matthew, Jesus refers to children twice. The first time, when the disciples ask Jesus who is the greatest in the kingdom of heaven, he puts a child in their midst and says to them, “Truly I say to you, unless you turn and become like children, you will never enter the kingdom of heaven. Whoever humbles himself like this child, he is the greatest in the kingdom of heaven” (Matthew 18:1–4). The second time, the disciples still haven’t gotten the message, and they rebuke people for bringing their children to Jesus. Jesus then says, “Let the children come to me, and do not hinder them; for to such belongs the kingdom of heaven” (Matthew 19:13–15).

“Humbles himself like this child…” In my limited experience I’m not sure “humble” is the word I’d use to describe toddlers. That same limited experience, though, has made me rethink my notions of the kingdom of heaven. We don’t learn anything about the children or their parents in the gospel accounts. But if toddlers then were anything like toddlers now, I’m sure some were dancing and singing, playing in the dirt and running around Jesus and each other. I’m also sure some were upset and looking for more attention than they were getting. No doubt many were asking Jesus or their parents all sorts of questions that had no immediate answers. Who knows, maybe there was even a procession or an “alleluia.” One of Jesus’ central—and all too often forgotten—teachings is that the kingdom of heaven is here and now. If we need a reminder of what that kingdom looks like, we need look no further than the little ones at Mass.