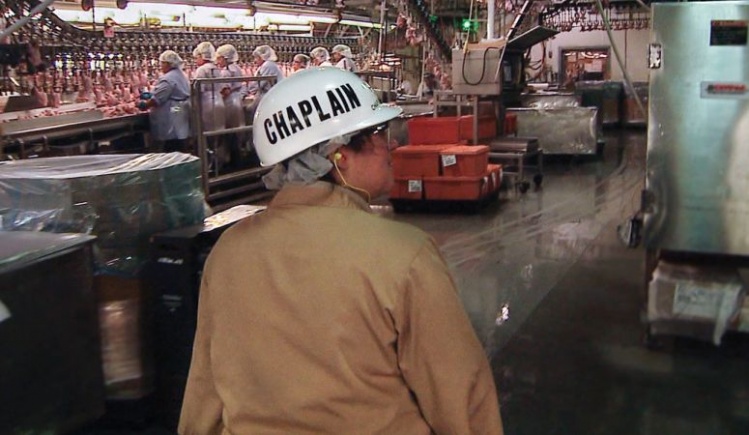 The Daytona 500 may not usually spark road-to-Damascus moments. But it did so for Nick Terry, who spent over a decade as a member of a NASCAR pit crew. The Monday after his team won the big race, he found himself wondering if the joy he was feeling resembled the joy of heaven. Then he heard the voice of God saying, “Not even close.” That epiphany prompted Terry to put his grease-monkey tools to the side to become a NASCAR chaplain. Yes, NASCAR has chaplains. So does Tyson Foods: the meat-processing company employs 120 full- and part-time chaplains to minister to its nearly 120,000 employees.

These bits of trivia are among the revelations in Chaplains, an absorbing and often moving nonfiction film that premiered on public television in November, presented by American Public Television. (The documentary is also available on DVD.) Produced and directed by Martin Doblmeier, Chaplains studies the work of religious professionals working in various sectors of the secular world: the military, Hollywood, the prison system, Congress, and more. By focusing on these cultural and institutional microcosms, the two-hour documentary manages to paint a picture of an entire society whose various activities are all embedded with chaplains.

Representing a specific faith tradition, but often called on to minister to individuals of different traditions (or none), chaplains have not exactly been invisible before now. Doblmeier’s documentary begins with a clip featuring Father Mulcahy, a character in the television series M*A*S*H*. Shortly thereafter, the documentary touches on the true story of “the four chaplains”: a Catholic priest, a Jewish rabbi, and two Protestant ministers who gave their life jackets to others after their World War II transport ship was torpedoed. The tale has inspired numerous tributes, including a TV movie.

On a more recent front, Chaplains briefly profiles Barry Black, a Seventh Day Adventist who delivered scolding prayers in front of his Senate flock during the 2013 government shutdown. For that bit of audacity, Black was celebrated by both Fox News and MSNBC’s Rachel Maddow.

Considerably less high-profile are all the religious professionals on salary at Tyson Foods, whose diverse workforce includes many immigrants. According to Chaplains, Tyson  has the largest chaplaincy program in the corporate world, with staff members representing more than twenty religions. We hear from the program’s director, former military chaplain Mike Tarvin, as well as other company employees, who talk about their work and the company’s “faith-friendly” ethos. Going into more depth, we follow one Tyson chaplain, Assemblies of God pastoral caregiver Melissa Brannan, as she talks with an employee struggling with cancer.

Intriguing personal stories surface throughout the documentary. For instance, we meet Rabbi Arthur Rosenberg, a former TV and film actor who now provides spiritual support for entertainment-industry veterans living in the Motion Picture & Television Fund retirement community in Los Angeles. In one delightful shot, we see Rosenberg buckling a seat belt around a Torah—donated by Steven Spielberg—as he prepares to drive to work.

Just as memorable is Karuna Thompson, a Buddhist woman who is a chaplain at a men’s maximum-security prison in Salem, Oregon. “What a chaplain does is lean in to the painful places,” Thompson says. Obviously, there are a lot of painful places on her beat: one affecting scene captures an inmate struggling with his emotions as he recalls the carjacking-gone-wrong that led to his imprisonment.

Here, and elsewhere, Chaplains connects—fortuitously, it seems—with some of our era’s hot-button issues. The men in Thompson’s care might well be interested in the criminal-justice reform that has recently become a bipartisan political cause. When the documentary follows a community liaison doing the rounds with a Michigan policeman, we see people wrestling with gaps of understanding between Muslims and non-Muslims.

Even the Affordable Care Act turns out to be relevant. A Chaplains section on spiritual caregivers at hospitals relates that the field is under pressure to come up with objective evidence of its usefulness: the new health-care dispensation values measurable outcomes.

David Miller, the director of Prince-ton University’s Faith and Work Initiative, describes a hunger for spiritual connection in the contemporary workplace. Millennials “want to bring their whole self to work,” he says in the film. “They want a holistic way of approaching work.” Chaplains depicts an entire country craving wholeness—and a legion of trained religious professionals striving to meet that need.