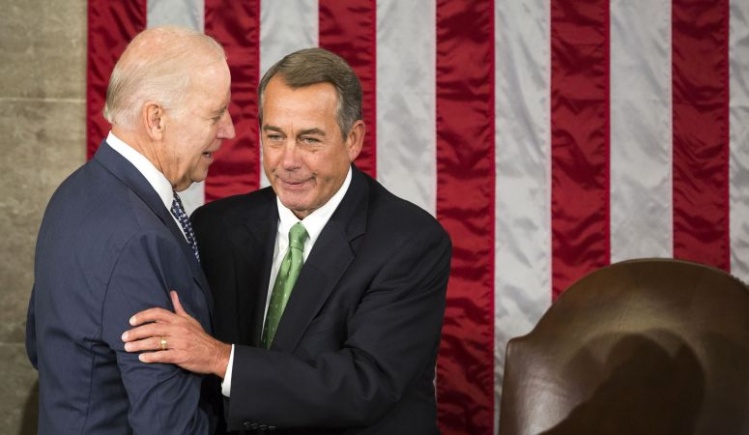 Barack Obama began his historic tenure as the first African-American president of the United States, the University of Notre Dame invited him to be its 2009 commencement speaker. Now, as Obama’s second term is coming to its end in 2016, Notre Dame has awarded the prestigious Laetare Medal to both Democrat Joe Biden, Obama’s vice president, and Republican John Boehner, the recently retired Speaker of the House. The award is given by the university to recognize exemplary service to the Catholic Church and to the broader society.

Reflecting on the two Notre Dame graduations, I think, clearly reveals that the latest rounds of the culture wars have sputtered to an end—and that we need a new way forward.

In announcing the recipients of the 2016 medal, Notre Dame’s president, John Jenkins, CSC, articulated his reasons for the choice: “Public confidence in government is at historic lows, and cynicism is high. It is a good time to remind ourselves what lives dedicated to genuine public service in politics look like.” Such dedication requires the willingness to pursue common goals despite deep moral and political differences. So it is significant that Biden and Boehner are sharing the award—and sharing the stage.

But things were very different seven years ago, when Notre Dame’s invitation to Obama provoked a firestorm of protest from conservative culture warriors. Mary Ann Glendon, selected to receive the 2009 Laetare Medal, refused her award rather than appear at the same podium with the prochoice president. Bishop John D’Arcy, Notre Dame’s local ordinary, skipped the official graduation. Rumors circulated on campus that Fr. Jenkins needed Secret Service protection because of credible death threats. In fact, the attitude of some protesters was so virulent that many Notre Dame faculty members thought it could only be explained by thinly disguised racism.

By contrast, the reaction from social conservatives to the 2016 graduation has been more muted. Kevin Rhodes, Notre Dame’s current bishop, objected to honoring Biden on the grounds of his stance on abortion and same-sex marriage—but he took pains to indicate that he understood Father Jenkins’s reasoning process. And Donald Wuerl, the cardinal archbishop of Washington, DC, agreed to accept an honorary degree from Notre Dame at the same ceremony, implicitly honoring the vocation to public service of both Biden and Boehner, while doubtless disagreeing with many of the specific policies they support.

What has changed in the past seven years? We now have widespread recognition that the barricades of the culture wars are collapsing upon us. No war—even a culture war—can become an indefinite and customary state of affairs without disastrous consequences. We can only recover by learning how to work together again—despite our deep differences—and learning to see the good in one another. Sometimes, those differences are moral: we have deep disagreements in this country about the morality of the death penalty, torture, drone warfare, abortion, and euthanasia.

Politics is the art of the possible. It’s counterproductive for culture warriors to insist on an unrealizable legal regime, even on life-and-death matters such as abortion. As St. Thomas Aquinas recognized, sound and stable law has to be in accordance with the custom of the country. Expecting each and every Catholic politician, for example, to pay lip service to unattainable aims—such as a constitutional amendment that would ban all abortions—diverts energy from the hard work of incrementally improving the situation of the  children—and the women and men—whose lives will be affected by crisis pregnancies.

Joe Biden is not pro-abortion, although he supports Roe v. Wade. In fact, he has run into trouble with reproductive rights groups because he opposes federal funding for abortion and supports the ban on partial-birth abortions. He struggles with what it means to govern in a society in which there are widely divergent views of women’s rights and unborn life. We don’t need to agree with every answer to honor the fact that Biden is asking the right questions.

In their efforts to combat abortion and same-sex marriage, conservative culture warriors baptized the Republican Party. What has it gotten them? Republicans are turning out in droves for Donald Trump—hardly a family-values standard bearer. Republican opposition to abortion and same-sex marriage is increasingly perceived simply as cover for economic policies that make it harder for anyone but the well-off to welcome new life into the world. Rather than protecting the vulnerable, Republican frontrunners are inflaming America’s original sin—racism—with potentially deadly results.

A few years ago, Pope Francis declared that the Catholic Church had become dangerously “obsessed” with the issues of abortion, contraception, and same-sex marriage. He warned: “We have to find a new balance—otherwise even the moral edifice of the church is likely to fall like a house of cards, losing the freshness and fragrance of the Gospel.”

We need to find a new balance in the political life of the country as well. Neither party is the party of saints. But both parties still include many good public servants. Let’s hope that Notre Dame’s decision to award the Laetare Medal to both Biden and Boehner will encourage talented, committed young men and women to risk the slings and arrows of political life in order to advance the common good—no matter whether they are Republicans or Democrats.