For Francis, Rules Aren't the Main Concern
By The Editors
U.S. Catholicism
Editorial
Pope Francis
Secularism and Modernity
Synod on the Family
Theology 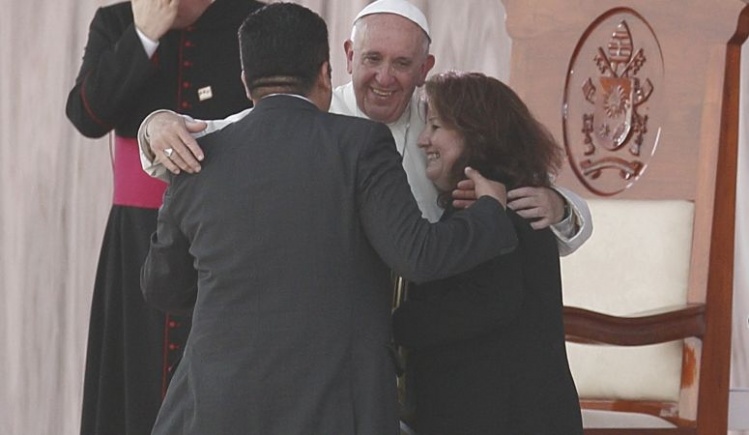 When the Vatican released Amoris laetitia (“The Joy of Love”), Pope Francis’s apostolic exhortation on marriage and the family, the press wanted to know one thing: Would the pope be changing the rule that officially bars remarried Catholics without an annulment from receiving Communion? The answer, which came toward the end of the 256-page document, was “No, not exactly.” But the rest of the exhortation made it clear that, for this pope, that was the wrong question.

Francis had once again broken loose from the standard categories that were supposed to govern the debate over a hot-button issue. Rather than changing a controversial doctrine or doubling down on it—as Pope Paul VI did with the church’s ban on artificial contraception—Francis recognized the importance of the church’s rules about marriage and Communion while also insisting that such rules could not be expected to cover every eventuality or to apply in the same way in every circumstance. This is a time-honored principle in the church: not even the most exhaustive code of law can replace prudence. As the exhortation puts it, “general rules set forth a good which can never be disregarded or neglected, but in their formulation they cannot provide absolutely for all particular situations. At the same time, it must be said that, precisely for that reason, what is part of a practical discernment in particular circumstances cannot be elevated to the level of a rule.” Some conservatives may be alarmed at Francis’s suggestion that even the best rules have exceptions, while some liberals may be disappointed with his refusal to turn the exceptions into the basis for new rules. But the rigor or laxity of the rules themselves was never the pope’s main concern—because rules were never his main concern. This is precisely what seems to bother some people.

The pope’s conservative critics must know that even the church’s strictest teachings often have exceptions. What are the Pauline and Petrine privileges, after all, if not exceptions to the church’s general rule about the indissolubility of valid marriages? (These “privileges” allow a pope to dissolve a marriage between a baptized person and his or her unbaptized spouse “in favor of the faith.”) Despite such impeccably traditional departures from Christ’s commandment against divorce, there is a tendency among some conservatives to confuse fidelity with a one-size-fits-all legalism. And if there is one thing you can confidently say about Pope Francis, it’s that he isn’t a legalist. Near the beginning of Amoris laetitia, he rebukes those who would reduce the Gospel message to a set of rigid disciplines—“stones to be hurled at others.” The pope wants to remind us that what Christ said of the Sabbath is also true of the sacraments and the rules surrounding them: they were made for us, not we for them. The rules exist not to protect the sacraments from being soiled by contact with sinners, but to protect us, the children of God, for whom the sacraments were instituted in the first place. The Eucharist, for example, is to be understood primarily as a gift that brings healing and nourishment, not as a remote display of supernatural power to be approached only with trepidation.

In the case of the divorced and remarried, the pope is calling for justice and moral realism. He draws attention to the obvious moral difference between the situation of someone who has abandoned his or her spouse and that of someone who has been abandoned. To treat these two situations the same way is neither just nor merciful. Francis argues that, since the degree of responsibility varies, “the consequences or effects of a rule need not necessarily always be the same.” This would seem to leave open the possibility that a divorced and remarried Catholic could, in good conscience and with the approval of his or her pastor, receive Communion. It would all depend on the particular circumstances—which is to say, it would depend on prudence. At the very beginning of Amoris laetitia, the pope reminds us that pastoral problems can’t always be solved in advance by Rome:

Not all discussions of doctrinal, moral or pastoral issues need to be settled by interventions of the magisterium. Unity of teaching and practice is certainly necessary in the church, but this does not preclude various ways of interpreting some aspects of that teaching or drawing certain consequences from it.... Each country or region, moreover, can seek solutions better suited to its culture and sensitive to its traditions and local needs.

This is not a recommendation of laxity or relativism. It is a recognition of human complexity and an endorsement of subsidiarity, a principle not restricted to politics. Only (properly trained) local pastors can be familiar enough with the members of their flock to undertake the kind of “practical discernment” necessary to apply the church’s rules without deepening the wounds caused by divorce or abandoning the already abandoned.