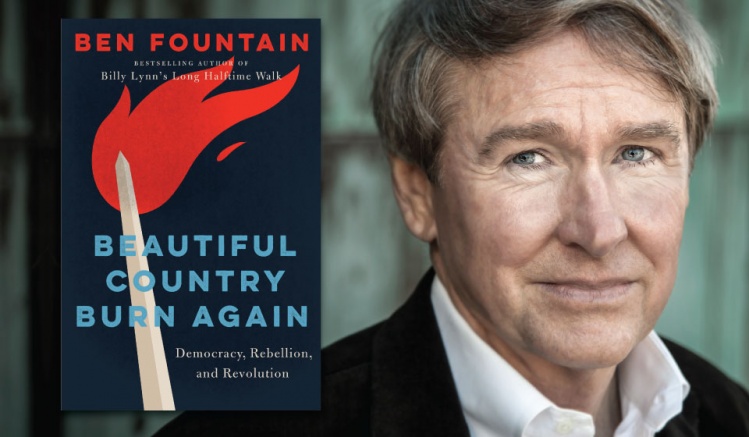 A half-dozen years ago, Ben Fountain published his first novel, the savage and blisteringly funny Billy Lynn’s Long Halftime Walk. Centering his story on the “troops” that every true-blue American professes to love and support, Fountain exposed that support as fraudulent: concocted by government officials, to divert attention from bankrupt U.S. war policies, and by well-heeled con artists, eager to cash in on post-9/11 patriotism.

Now Fountain has followed this triumph with a work of nonfiction. Surveying the year that culminated in Donald Trump’s election as president, Beautiful Country Burn Again addresses the state of the union that those troops are ostensibly defending. Along the way, Fountain reprises “the daily outbreaks of absurd and disturbed behaviors” vividly displayed at political rallies, party conventions, and most entertainingly, the annual meeting of the National Rifle Association. All in all, it makes for a rollicking journey, albeit at times a queasy one.

As a stylist, Fountain combines the talents of Ambrose Bierce, Norman Mailer, and Hunter Thompson (each of whom he cites approvingly). Readers of Beautiful Country will encounter zingers galore. On Bill and Hillary Clinton: “If every marriage is unknowable from the outside, theirs is the Mariana Trench of marital mystery.” On Texas Senator Ted Cruz: “You’d think he gargles twice a day with a cocktail of high-fructose corn syrup and holy-roller snake oil.” On Congress’s approval rating: “lower than cockroaches, head lice, and zombies.” And on Trump: “He is the bog monster of the American id, rising out of the masturbatory muck of our military fantasies.”

Amid such rhetorical pyrotechnics, Fountain has written a deadly serious book. In it, he offers a penetrating critique of a contemporary American politics thoroughly corrupted by money and moneyed interests. His pithy summary of the existing system consists of a mere eight words: “Profit proportionate to freedom; plunder correlative to subjugation.” In less highfalutin language, this means that in our rigged system, the well-to-do enjoy liberty and exercise power; everyone else struggles to get by.

Although Fountain leans left politically—his nostalgia for FDR’s New Deal is palpable—he lays into both major parties with equal ferocity. That the GOP exists to serve the interests of the rich he accepts as self-evident. Yet Democrats, in his view, have merely “made things worse a little more slowly than Republicans.” In recent decades, both parties have subscribed to a common set of principles, typically referred to via nondescript euphemisms such as the Washington Consensus or neoliberalism. The impact of these principles, to which no alternative ostensibly exists, has been lethal.

The economic distress suffered by the so-called deplorables is real, and it is unrelated to attitudes regarding race.
sharetweet

True, neoliberalism has meant great wealth for some. Yet it has left far greater numbers of ordinary citizens behind. In doing so, it has all but destroyed the last remnants of our social contract, while contributing to what Fountain calls the “chloroforming of the [American] soul.” Meanwhile, the “Fantasy Industrial Complex”—“all these screens everywhere going 24/7 with movies, TV, internet, email, text, tweets, news saturation, ad saturation, sports and celebrity saturation, social media, Amazonian sewers of sex and political porn, the entire onslaught of media and messaging that numbs us out and dumbs us down”—reduces citizenship to hardly more than a compulsion to consume or to seek relief from boredom.

Yet however numbed and dumbed-down, the electorate seized upon the election of 2016 as an opportunity to repudiate this bipartisan consensus. As Fountain notes, “Three decades of supply-side economics, gung-ho globalization, and the biggest redistribution of wealth in history—not trickle down, but vacuum up—had at last brought about a reaction.” The millions who voted for Donald Trump meant to put a torch to the existing system, their efforts tacitly abetted by the many millions more who chose not to go to the polls. From this perspective, Fountain believes, the outcome of the election was less an endorsement of Trump himself than “a lung-cleansing primal scream,” unleashed by fed-up Americans who weren’t going to take it anymore.

As a basic explanation of what happened in November 2016, that strikes me as about right. So it is surprising that in his concluding chapter, Fountain goes off on a tangent, ranting at length about the persistence of American racism. Granted, there is plenty to rant about. Yet as an explanation of the present moment, the assertion that “the great divide in America has always been the color of skin” falls short. It is not wrong, merely inadequate. Yes, racism in the United States today is real, tenacious, and more pervasive than most Americans will admit. As Fountain’s own account clearly shows, however, racism alone does not suffice to explain the crisis embodied by Donald Trump.

The economic distress suffered by the so-called deplorables is real, and it is unrelated to attitudes regarding race. And grotesque economic inequality is not their only complaint. There are the never-ending wars conceived by elites who rarely feel their effects, along with the abandonment of traditional Judeo-Christian norms, leaving many Americans morally adrift. (Fountain evinces little interest in religion per se, treating faith mostly as a means by which unscrupulous pols manipulate the rubes who still take all the God stuff seriously.) In other words, the primal scream derived from more than one factor. Racism is part of the mix, but so are culture, class, and America’s role in the world.

Little of the critique mounted in Beautiful Country qualifies as entirely original. But Ben Fountain’s voice—enraged, unsparing, unrelenting, acutely attuned to hypocrisy, and suffused with wit—invests his testimony with an authority that commands respect. Ours is a profoundly sick society. For definitive proof, just look at who is living in the White House.