Beyond the Abortion Wars 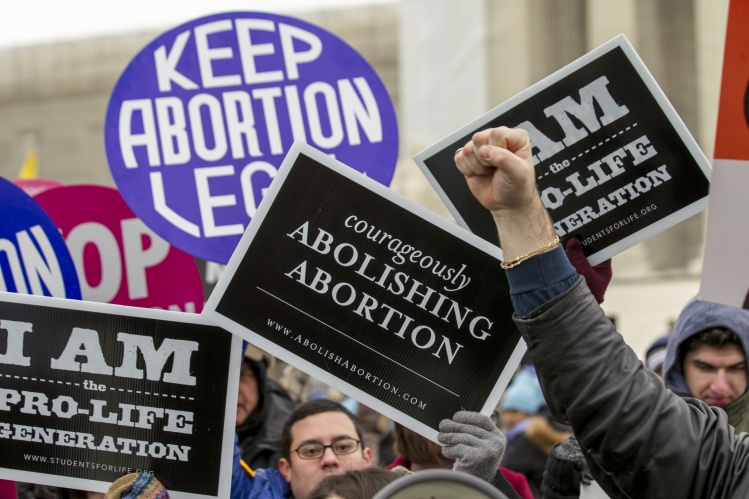 The University of Scranton recently made national news by deciding to eliminate coverage for abortion from the health-insurance plans available to its employees. In order to comply with Pennsylvania law, the University’s plans had previously covered abortion in cases of rape, incest, and threat to the mother’s life. Now that the university is self-insured, however, its insurance plans must comply only with federal law, which does not mandate any coverage for abortions. In explaining the university’s decision to faculty and staff, Scranton President Kevin Quinn, SJ, quoted Pope John Paul II’s Evangelium vitae: “Circumstances, ‘however serious or tragic, can never justify the deliberate killing of an innocent human being,’ and ‘no one more absolutely innocent could be imagined’ than the unborn child.”

Fordham University theologian Charles Camosy believes that we are “on the verge of a new moment in the abortion debate.” According to him, it is but an “illusion that we have a hopeless stalemate in the abortion debate”; instead, “a fundamental change in our politics is right around the corner.” Camosy cites lots of polling data in support of this view, and he seeks with this book not only to predict the coming change, but also to hasten and help shape it. Camosy even proposes model legislation. The change he expects to see is recognition of the full moral standing of the prenatal child (his language), coupled with provision for abortion in precisely the cases that will no longer be covered by health insurance at the University of Scranton. The legislation Camosy proposes, which he calls the Mother and Prenatal Child Protection Act, is, he claims, “consistent with both the currently settled doctrine of the Roman Catholic Church and the ongoing shift in U.S. constitutional law, especially with the evolving ‘undue burden’ standard.”

There is much to admire about Camosy’s project, which grows out of a 2010 conference he organized for the purpose of bringing together “the different sides of the abortion issue.” As Camosy notes, there are currently around 1.2 million abortions per year in the United States; one in five pregnancies ends in abortion. Around 1 percent of abortions involve cases of rape. In another 1 percent the mother’s life is in peril. So Camosy is predicting that it will soon be politically viable to reduce the number of (legal) abortions per year to roughly twenty-four thousand. I hope he’s right.

Unfortunately, Camosy is wrong that Catholic teaching permits abortion in cases of rape, incest, and threats to the mother’s life.

From the mid-fifteenth century to near the end of the nineteenth, Catholic moralists generally gave greater weight to the mother’s interests in cases of “vital conflict”—sometimes on the basis of the lesser-evil argument that, if an abortion were not performed, both mother and child would die. As John Noonan has remarked, “As the balance was once struck in favor of the mother whenever her life was endangered, it could be so struck again.” But the church’s current teaching, spelled out in Evangelium vitae, holds that it is never permissible intentionally to kill the unborn.

Camosy’s argument in defense of abortion when the mother’s life is threatened turns on the claim that, while formally innocent, the unborn child who threatens her mother’s life “is materially a mortal threat,” analogous to a six-year-old child soldier who goes on the attack. But a closer analogy is to an innocent bystander who, by happening to be in the wrong place at the wrong time, poses a threat to one’s life for which he or she is entirely nonresponsible. Does this person forfeit her right to life? Would it be morally permissible to kill her in order to save oneself? The answer isn’t at all clear. At the very least, Camosy’s argument might need to be supplemented with the claim, found in the Jewish tradition, that a child owes its life to its mother and that the mother should therefore be given priority in cases of vital conflict.

Camosy’s argument for the permissibility of abortion in cases of rape is much more novel. He begins by distinguishing so-called direct abortions, “where death is either the goal of the act or the means by which the goal is accomplished,” from so-called indirect abortions, which “do not aim at the death of the child.” One example he gives of an indirect abortion is a hysterectomy to save a woman from life-threatening uterine cancer despite the fact that she is pregnant. Camosy does not explain why we should call this action an abortion at all, but instead draws from it the conclusion that it is permissible “to refuse or cease to aid the prenatal child” as long as “the death of the child is ‘foreseen but not intended’” and one has a proportionately serious reason.

Camosy then asks how we should evaluate drugs like Ella that prevent the embryo from implanting in the uterus and drugs like RU-486 that detach the fetus from the uterus. Here Camosy’s terms “direct” and “indirect” confuse the argument. After observing that a surgical abortion “involves a direct attack on the body of the prenatal child,” he notes that “the drugs present in RU-486, by contrast, do not…appear to attack the fetus.” The upshot, for him, is that abortions caused by RU-486 and Ella may be considered indirect abortions. Camosy claims that a woman who uses these drugs “need not aim at the death of the prenatal child” and that what these drugs do “could, in fact, be better described as refusing to aid rather than killing.” He also claims that a woman who has become pregnant from rape has a proportionately serious reason to refuse or withdraw her aid for the child she is carrying, and that this is consistent with “traditional Catholic moral theology.”

There are a number of problems with this argument. First, whether an action attacks the body of an embryo or fetus is irrelevant to whether it is a direct or an indirect abortion, as Camosy’s initial exposition of these terms correctly indicates. What distinguishes a direct abortion is that the death of the embryo or fetus is intended or sought as a goal. Now, does a woman who takes Ella or RU-486 not aim at the death of the embryo? Could one prevent it from implanting in the uterus or detach it from the uterus and not intend for it to die? Compare exposing a newborn on a mountain. It’s nonsensical to hold one could expose a newborn without intending its death. It appears likewise nonsensical to hold one could aim at detaching the embryo or preventing it from implanting without thereby aiming at its death. As the British philosopher Elizabeth Anscombe once remarked, “Circumstances, and the immediate facts about the means you are choosing to your ends, dictate what descriptions of your intention you must admit.”

Along these lines, consider whether the goal of the woman’s action would be accomplished if the embryo did not die. In that case, wouldn’t she, if she still had the same intention, be likely to try another drug or some other method? It’s true that the story might be different if embryos could be developed ex utero, in a so-called artificial womb. Perhaps then a woman might take Ella or RU-486 not to kill the embryo, but in order to free herself from carrying and giving birth to it. With current technology, however, that’s not an intention one can coherently have. Note too that, when Ella or RU-486 is used in our current state of technology, the embryo does not die from some pre-existing condition like kidney disease, but precisely from the refusal or withdrawal of aid. This fact makes it hard to claim that the refusal or withdrawal does not constitute killing.

A final problem is that refusal or withdrawal of aid may be just as objectionable as a “direct attack.” Say I decide to stop feeding my dog and he starves to death. Have I killed him? As this is a case of wrongful death, we would rightly reject as sophistry the claim that, no, I only let my dog die. To the further plea that, after all, I didn’t attack the dog but merely refused aid or withdrew it, the right response is: So what? Where’s the difference that makes a difference morally?

None of these criticisms of Camosy’s arguments implies that abortion in cases of rape, incest, or threat to the mother’s life should be illegal. That would follow only if it were granted that current Catholic teaching on abortion should become the law of the land. Camosy seems to think it should, but he is wrong about current Catholic teaching. It may be, however, that what really needs reexamining in his project is the assumption that the law of the land with respect to abortion should exactly mirror the church’s moral teaching. In this regard, it seems to me that a woman who bears the child of her rapist needs heroic virtue to do so. But no prudent law could demand this, and the American public would not accept it. If you doubt this, just consider how, according to the press, President Quinn’s decision was greeted at the University of Scranton: with uproar. If faculty and staff at a Catholic university are up in arms over whether church teaching should determine the insurance coverage available to its employees, imagine the uproar were the stakes higher.