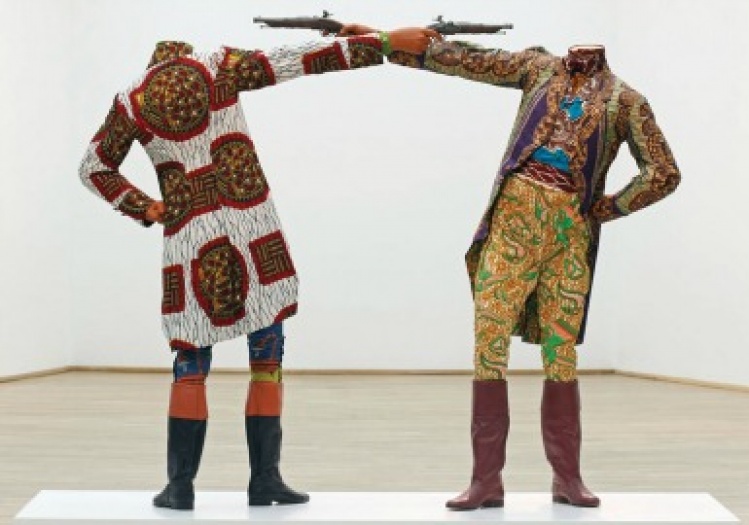 I’m sitting in hell with a couple of little boys, who are trying to prove they’re not scared. We’re watching a cloth-wrapped figure prostrate itself and bang its fists against the floor, as sobs and wordless singing give way to a howled “I, I, I surrender!” Behind us stretches a huge black coiling thing that looks like a well-fed python. “It’s just a video,” one kid says in a subdued voice.

We’re in the depths of the National Museum of African Art, where “The Divine Comedy: Heaven, Purgatory, and Hell Revisited by Contemporary African Artists” will run through August 2. The show, which originated in Frankfurt before coming to the United States, features artworks inspired either by Dante’s great poem or by the poem’s setting in the three realms of the afterlife. It’s a big, meandering show. A visitor’s winding progress from hell in the lowest level to heaven on the ground floor has rich symbolic resonance, but it’s easy to get lost—and perhaps that fact has its own symbolism.

The Hell rooms are the most consistently effective. They’re dark, with black walls; only the captions and the art itself are spotlit. You’re greeted by Wim Botha’s 2013 sculpture, Prism 10 (Dead Laocoön). A central lead-gray figure is being seized and pulled by two others. All three are faceless, and their stretched bodies seem to be made out of taffy. Walking around the sculpture reveals a hint of wings. Across the canvas of Julie Mehretu’s 2009 Fragment, patches of watery ink have been wiped and scraped with small strokes. Red, black, and blue lines crisscross behind the drifts of ink, creating ghostly hints of architectural plans. The whole image seems to be endlessly crossing itself out.

The thing that looks like a python is one of the scarier pieces in the exhibition. Nicholas Hlobo’s 2012 Tyaphaka is made of rubber, ribbon, hosepipe, and packing material. It’s big enough to swallow you: a lumpy black coil that narrows at one end. At that end lie three round objects—like severed heads with hair made of multicolored ribbons. “Please do not touch,” the caption warns, but I doubt anyone is tempted.

There is also some gallows humor: Yinka Shonibare’s 2006 How to Blow Up Two Heads at Once shows duelists, dressed in gorgeous tailcoats and breeches, holding one another at gunpoint, glamorous—and headless. There are mysterious pieces, like Mouna Karray’s 2014 The Rope. In these ink drawings made to look like photographs, a person is dragged through an autumn wood by a doppelgänger. Parts of the image explode in white light. This could be an image of compulsion: an unwilling soul dragged endlessly back to familiar sins. Or it could be an image of the soul resisting the pull toward freedom. The autumnal setting hints at sadness, but the dissolving white light suggests transcendence.

Berry Bickle’s video series are among the few works to explicitly place Dante in Africa. Bickle interleaves silent-era film images of Dante and Beatrice with footage of interviews with torture survivors and a man walking across a trash heap. In Virgil in Limbo, the man on the trash heap says, “It’s better that we stay here in Hell. We share the life with the flies.” But even here there’s a hint of hope: “This Hell will be Heaven one day.”

And with that—and a sigh of relief—we exit Hell. In Purgatory the museum walls are gray, not black, and there’s subdued lighting. The wall caption introducing this area doesn’t explain what Purgatory actually is, its most basic religious meaning. The museum does note, “It is a state of longing, a place in between.” The spiritual and emotional content of both the Purgatory and Heaven sections of the exhibit is much more varied than that of Hell. Art can easily evoke horror; evoking repentance or beatitude is much harder.

Some of the artworks have an obvious purgatorial significance. The bluntest is Dimitri Fagbohoun’s 2014 Refrigerium. A video playing outside a confessional explores the narrator’s relationship with his deceased father: Is he in Heaven? In Hell, in Purgatory? The confessional’s side doors, where penitents would enter, can be opened, and in one of them there’s an image you won’t forget: On the ledge beneath the grille—right where you’d rest your hands during confession—are the words “Lord Have” spelled out in nails pointed upward. And on the kneeler below, the nails read, “Mercy.”

Jellel Gasteli’s 2013 Tunisia, a series of photographs, is subtler. We see abandoned desert scenes: water flowing through a metal trough, spilling into the sand; a battered, broken oil drum and an illegible sign; another sign with an arrow and the promise, “Café” (with no café in sight). These are images of time’s corrosive effect and the struggle to lead human lives of work and joy in a hostile environment. There’s a close-up of a single footprint in sand—we won’t pass this way again.

Other works resonate with Dante’s own symbolism. Pascale Marthine Tayou’s Circle of Life is a vast array of draped red silk, forming a ring, with a crystal hanging over it. It suggests the circles through which Dante passes and the upward trajectory of his journey. Maurice Pefura’s 2013 sculpture The Silent Way Beatrice is a gray wide-hipped figure, its arms extended as if to embrace the viewer, and stuck all over with nails.

But after the intense horrors of Hell, the later two sections can feel scattershot. Hassan Musa’s 2010 The Keys of Paradise, a cloth hanging that shows a shirtless man pushing a catawampus companion in a shopping cart, is a striking composition whose title and border of national flags suggest the supplicant posture and incomplete journey of the immigrant. Kiluanji Kia Henda’s photo series Othello’s Fate follows a naked black man through a theatrical setting filled with traditional European art. Both works explore outsider status, which is a kind of “in between” state. But we get only intermittent hints of penance and change, the themes that one might expect to infuse purgatorial artwork.

Heaven is white-walled and well lit. The introductory caption asks, “What does paradise mean to you? A perfect vacation location? A divine light?” The choice of art for display is equally uncertain about the nature of Heaven. Ghada Amer’s 2012 The Blue Bra Girls is a giant egg-shaped sculpture, made out of the outlines of naked women. Flowing hair, bedroom eyes, bare breasts: this is probably somebody’s idea of paradise, if not Heaven.

Even powerful artworks like Christine Dixie’s 2009 The Binding—a series of portraits inspired by the binding of Isaac, showing a sleeping boy covered by a blanket—seem more menacing than heavenly. The outline of a gun pointing at the child is visible under the blankets, and in one of them he’s posed like a mummy. Similarly, many of the photographs in Andrew Tshabangu’s series On Sacred Ground, which depict Christian prayer and worship (a dramatic Midnight Mass, prayer in fog before a crucifix), have strong themes of penance and endurance. These are startling, spiritually rich portraits...but why are they here?

One of the few things Scripture tells us about Heaven is that it’s full of song. Abdoulaye Konaté’s 2008 quilt-like wall hangings Dance of Kayes depict gloriously colorful silhouettes of dancing women. Youssef Nabil’s 2008 photo series I Will Go to Paradise has a more meditative aura. Hand-colored silver gelatin prints show a man rising up out of the sea. The unearthly colors lend the scene an ethereal hush. And then there’s Zoulikha Bouabdellah’s Silence. Prayer mats are laid out in a large rectangle, with identical pairs of glittering white stiletto heels in the center of each mat. It’s cheeky and open to interpretation. One could see it as satire on the religious devotions of the rich. I chose to see it as an image of equality and beauty: in Heaven even the poorest women will have perfect sequined shoes.

This is a complex show, with new perspectives not only on Dante but on divinity. Unfortunately, it also reminds the viewer that it’s easier to find a common language for misery than for redemptive suffering or beatific joy.

The Glory & the Grime