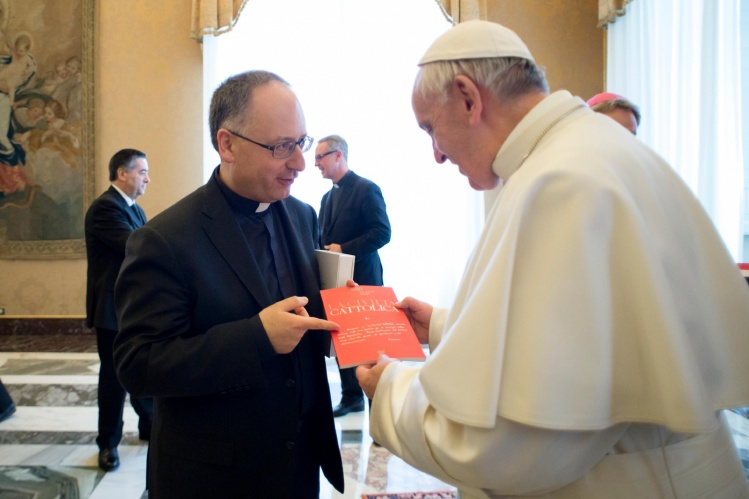 Th­­­­e Rome-based Jesuit magazine La Civiltà Cattolica is one of the most important sources for understanding the relationship between the Jesuits, the papacy, and the Catholic Church on one side, and the secular, modern world on the other. Since its founding in 1850, its articles have signaled particular positions or shifts on important issues, including religious liberty, Communism, and racism and antisemitism between World War I and World War II. The most recent example is the piece from editor-in-chief Fr. Antonio Spadaro, SJ, and Marcelo Figueroa, a Presbyterian theologian from Argentina who since June 2016 has been editor of the Argentine edition of the Vatican newspaper L’Osservatore Romano. In a remarkably direct and strongly worded criticism, they argue that efforts to build links between conservative American Catholics and Evangelical Protestants have been more politically than religiously motivated, and have had an impact on the political culture of conservative Catholics in the United States.

The article, though co-authored by the editor, who has also been among the closest allies of Pope Francis since the beginning of his papacy, does not represent the official position of La Civiltà Cattolica, the Jesuits, or the Vatican. There is the tendency sometimes to view in all things Vatican an ideological and intellectual unity that does not exist and never really has. La Civiltà Cattolica is vetted by the Vatican before publication. But relations between the Vatican and the magazine (based in Villa Malta, behind the Spanish steps) has always been complicated (for example, during the pontificate of John Paul II)–no less complicated than relations between the papacy and the Jesuits. It is not only a matter of power relations among the pope, the journal, and the Jesuits. It is also a matter of relations among the Jesuits themselves—within La Civiltà Cattolica and within the Society of Jesus, in Italy and globally.

The article is a must-read, and it is likely to be remembered for several reasons. The first has to do with the role of La Civiltà Cattolica in the pontificate of Francis. What the magazine does is far more important to understanding this pope than what the curia does, especially the Congregation for Divine Worship and the Discipline of Sacraments of prefect Cardinal Robert Sarah and the Congregation for the Doctrine for the Faith—at least up to the departure of Cardinal Mueller and the arrival of Archbishop Ladaria. It’s not just the articles that the magazine runs, but also all the books originating from the Villa Malta Jesuits and the numerous events they sponsor and host. Earlier this year, the magazine launched French, English, Spanish, and Korean editions.

But such active engagement isn’t new; indeed, it goes back almost sixty years, to the editorship of Fr. Roberto Tucci, like Spadaro an Italian Jesuit familiar with the English-speaking world. During the pontificate of John XXIII, Tucci positioned La Civiltà Cattolica to support his theological message as well as Vatican II, which faced significant opposition both within the Catholic Church and the Society of Jesus. The shift of La Civiltà Cattolica under Tucci was just the prelude to the shift in the overall theological orientation of the Society of Jesus that came at the end of Vatican II, thanks to its new general, Fr. Pedro Arrupe. In the context of the so-called globalization of Catholicism, La Civiltà Cattolica is not the megaphone of the Vatican. But there has been a meeting of the minds with Francis, and the magazine is reflecting the views of a pontiff who chose from the beginning not to have his own, ideologically aligned Roman Curia in the way John Paul II or Benedict XVI did.

The magazine is reflecting the views of a pontiff who chose from the beginning not to have his own, ideologically aligned Roman Curia
sharetweet

The second reason has to do with what the Spadaro-Figueroa article represents: another phase in the still-developing (and at-times difficult) relationship between Francis, U.S. Catholicism, and the United States in general. The first phase covered the first two years of Francis’s pontificate (March 2013 to September 2015), which were marked by caution on Francis’s part, even in the face of growing, publicly voiced criticism from certain U.S. prelates as early as summer 2013. For the next two years, Francis had to prepare for the Synod on the Family and for his U.S. trip—the latter specifically aimed at establishing normal relations with the most powerful Catholic Church in the North Atlantic.

The second phase began with the second bishops’ synod in October 2015, when some U.S. bishops and cardinals emerged as main voices in opposing Francis. The reception of the synod and the difficult reception (or non-reception) of Amoris laetitia—especially on the part of Cardinal Burke and Archbishop Chaput,* and a majority of the U.S. episcopate)—made plain just how complicated that relationship would be. The third phase spans the campaign and election of Donald Trump in 2016. During this time there was an unprecedented exchange between a pope and a U.S. presidential candidate, whose eventual victory was aided by a majority of white Catholics and the support of some U.S. church leaders—this in spite of Trump’s Islamophobic remarks and advocacy for the deportation of undocumented immigrants, among other things. The Spadaro-Figueroa article marks the latest phase in this brief but intense history, and can be read as part of the Roman and Vatican appraisal of the relations between American Catholicism and Trump.

All that said, it is not the first to address in critical terms some political issues close to the heart of American conservatives. There was, for example, the piece on gun control by the Jesuit Pierre de Charentenay in March 2016, which made clear the magazine’s unwillingness to condone a key element of the conservative “pro-life” platform in America. There have since been pieces on the 2016 election, on the “Muslim ban,” on Trump’s audience at the Vatican, and on Trump’s foreign policy.

The third reason this article is important is that it offers a rare view of U.S. Christianity not just from the Vatican, as John Allen pointed out, but also from outside the United States. It is worth wondering whether La Civiltà Cattolica is giving voice to how non-American Christians and Catholics around the world are perceiving the U.S. situation. Christianity and Catholicism may be global insofar as technology has enabled worldwide connectivity. But there’s still a disconnect on the intellectual, spiritual, and linguistic fronts. The so-called democratization of theology (more laypeople studying and teaching theology, and the weakened monopoly of the clergy on Catholic theology) seems to have widened, not narrowed, the transatlantic gap. This is part of the “ecumenism of hate” Spadaro and Figueroa talk about: new channels may have been opened to different churches and traditions, but these have also resulted in new barriers between different members of the same church and between Christianity and Islam. The radical difference between Francis’s “ecumenism of blood” and the “ecumenism of hate” (which I might have termed “ecumenism of the trenches,” in the coinage of Charles Colson, whom Spadaro and Figueroa mention) is itself part of “Pope Francis’s American problem”: a tension between American Catholicism and the global Catholic culture Francis speaks from, and to. The Trump presidency is only exacerbating a pre-existing condition.

Spadaro and Figueroa capture this tension most explicitly when they point out the difference between the “dominionist” political culture of the conservative political ecumenism of “Evangelical and Catholic integralists,” and Pope Francis’s acceptance of the distinction between political power and religious authority. Reading some reactions to the article, I was struck by the lack of understanding of the difference between Francis’s view of laïcité as a distinction between religious power and political authority on one side and the view of it as the strict constitutional separation of church and state on the other side. The recent influx of converts from various American Protestant churches into American Catholicism is a possible, partial explanation, in my opinion, for the lack of familiarity many observers of U.S. Catholicism seem to have with the history of the political culture of the Catholic Church—especially the differences between stages in the development of Catholic doctrine on democracy. (To name just three: medieval-Christendom Catholicism; the continuities and discontinuities between Syllabus of Pius IX and Leo XIII’s Rerum Novarum; and the years from World War II through Vatican II and the post-Vatican II period). But setting aside the intellectually inept conflation of the Catholic notion of distinction between political power and religious authority with the constitutionally sanctioned “separation of Church and State,” it is undeniable that even the mildest concept of laïcité is, today, unacceptable for many American Catholic leaders (both clerical and intellectual). In this sense the article points to something that really has happened to American Catholicism: a growing nostalgia for political Augustinianism as a juridically and institutionally established subordination of the temporal order (politics) to the supernatural (the church). This political neo-medievalism (conscious and unconscious) is one of the side effects of the moral and theological de-legitimization of politics today. Yves Congar, reading Gaudium et Spes in December 1965, thought that this was no longer part of the developing Catholic tradition.

Steve Bannon and Donald Trump will at some point no longer be a concern of American Catholicism. But this particular American issue of the relationship between the church and secular power will always be there. La Civiltà Cattolica and large sectors of American Catholicism have long been on opposite sides in the debate over the compatibility of the church with liberal democracy. In the old days, it was the Americans who thought they were compatible and the Jesuit magazine that thought they weren’t; now it’s the other way around.

* Updated to correct a misidentification of Archbishop Chaput.

Francis Has a Message for the Italian Church