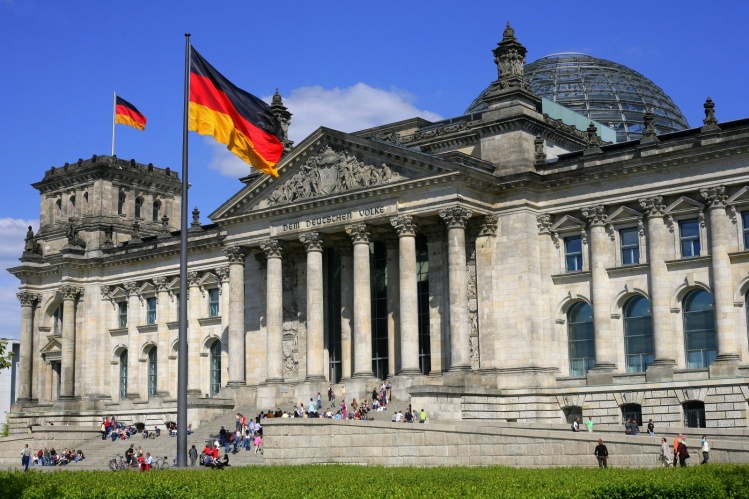 The German Unity Flag is a national memorial to German Reunification that was raised on 3 October 1990. It waves in front of the Reichstag building in Berlin, seat of the Bundestag. (Cezary Piwowarski)

The recent riots at the G20 summit in Hamburg sent shockwaves across Germany. The images of cars burning in bourgeois neighborhoods and the massive deployment of police, whose numbers were bolstered by reinforcements from all over the country, took people here by surprise. One reporter, speaking from the mayhem, spoke of war-like conditions in the city’s streets. President Frank-Walter Steinmeier visited Hamburg in the immediate aftermath of the riots and confessed to being “erschüttert” (shaken) and “fassungslos” (stunned) by the violence. Some in the press began to wonder if it would take Germany “zurück in die 70er” (“back to the 1970s”), when the country was indeed shaken to its roots by left-wing violence associated with the Red Army Faction. But the fear quickly dissipated, and Steinmeier has since expressed what seems to be a firm consensus here: German democracy is strong enough to withstand this challenge. And he is right. German democracy, once the sickly step-child of its American guardian, has come into its own, and now has a thing or two to teach the United States.

For decades after World War II, and to some extent even today, Germany was caricatured in American popular culture as a country of ex-Nazis. Whether half-ironic or not, the image seemed indelible and ineradicable—to the chagrin of many younger Germans of the so-called second and third postwar generations. Decades of public commemoration and self-flagellation have done their part—particularly since Unification in 1990—to dispel that seemingly intractable image. The more serious side of this story, however—unbeknownst to many Americans who uncritically imbibe the popular Germans-as-Nazis image—is the historic failure of German democracy during the Weimar Republic. During the interwar period, Germany’s notoriously weak institutions and casual commitment to democracy—along of course with the economic devastation of World War I—helped make Nazi Germany possible. In the postwar period, too, one sensed pervasive uncertainty about the state of German democracy. Was it good enough? Strong enough? Was it really understood and fully accepted by West Germans?

Up through the 1970s and early ’80s, serious public intellectuals (taken seriously then, perhaps less so today) like Heinrich Böll, Günter Grass, and Herbert Marcuse sided with student protesters in their conviction that postwar German democracy was contaminated by Nazism—through and through. There was then an uneasy sense that true democracy could not come into its own because of the perseverance of allegedly “fascistoid” mental structures, as well as the continued presence of ex-Nazis in public office, the judiciary, and academia. This embarrassing and unmistakable fact—think of ex-Nazis like Hans Filbinger, the long-time governor of Baden-Württemberg, and Kurt-Georg Kiesinger, Chancellor of the Federal Republic from 1966-69—helped to make the students’ case. It stoked anxiety abroad, and at home, about Germany’s inadequate achievement of democracy. But that was then—a time when American democracy, having withstood Nixon’s “imperial presidency” and the constitutional crisis of Watergate, was still a beacon and an inspiration. Tarnished by political scandal and Vietnam, American democracy nevertheless remained an ideal to many. Today it is the Americans who may want to turn to Germany for a lesson on democratic institutions.

Today it is the Americans who may want to turn to Germany for a lesson on democratic institutions.
sharetweet

I toured the Bundestag—Germany’s Federal Parliament—with my Notre Dame students several weeks ago. Our elderly guide was eloquent and well informed, and the students were listening more or less dutifully. But I could feel their attention—and mine, frankly—waning in the warm afternoon, post-lunch haze. (There is virtually no air-conditioning in Germany, and despite the vaunted air-circulation system built into the Reichstag’s glass cupola, it was hot.)

Our guide was in the midst of a somewhat detailed story about a renegade conservative politician, who after revolting against the policy of her own party, the CDU (Christian Democratic Union), was isolated and prohibited from even speaking in parliament without its permission. Her seat in parliament—the literal chair itself—was moved to the margins of the CDU block, indicating her diminished, liminal status.

At first I didn’t know why he was telling us what seemed like a rather arcane story about a second-string politician. I wanted him to move it along—he was losing my students. But then it hit me, and I snapped to attention. “So what you’re saying,” I said, shamelessly seeking to reignite my students’ attention by drawing a direct comparison to U.S. politics, “is that in Germany a Tea Party or Freedom Caucus revolution would simply not be possible.” A sly smile crept across his face; he indeed seemed interested in drawing attention to this German parliamentary innovation.

Half the seats in parliament are elected directly, he explained, but the other half are elected via lists put up by the party. The notoriously complex system of German elections, which involves a relatively abstruse formula even he chose not to explain fully, is a direct result of the failed Weimar experience. It virtually guarantees that parties will not be undermined from within, and that legislative agendas can move forward once an election has taken place. “Yes,” he insisted, “politicians can of course defy their party in Germany.” But they pay a price for doing so. That rogue politician he described will retire after her current term expires.

What began as a somewhat routine tour suddenly became personal, at least for some of us. It dawned on me that we take the historic Reichstag building for granted as an icon of failed democracy: its burning in February 1933 led rather directly (via the “Enabling Act” of the following month) to the elevation of Adolf Hitler. But we were getting another, diametrically opposed message today: This is the seat of an active, functioning democracy, one that in its very vitality seems worlds apart from that of its one-time mentor. The only news coming from Washington these days, apart from that about the White House and its Russian connections, appears to be about legislative impasse. Despite the Republican majority in both houses, the gridlock that characterized the Obama years continues virtually unchanged. We have grown accustomed to a failed democracy. In Germany, the political culture is vibrant, diverse, and contested—but this has not kept the Bundestag from passing the controversial Ehe für alle (“marriage for everyone”) law just a few weeks ago. A legislative act, let it be noted, not a judicial one, as in the United States.

Conservative or liberal, you can’t help envying a system that works: walk out of the historical Reichstagsgebäude—the home of the Bundestag—and look in virtually any direction, and you will see monumental signs of Germany’s substantial investment in infrastructure. The glistening Hauptbahnhof (main train station)—an architectural marvel in its own right—will soon be linked by rail with the new Berlin Brandenburg Airport. And while that is itself somewhat of a running joke here (it was supposed to have been completed over four years ago), the fact remains that it will be completed—despite corruption, scandal, and political blame-gaming.

My students and I exited the building, off to our next destination, and made our way down the main axis of old downtown Berlin (once East Berlin), the famous Unter den Linden avenue that culminates in the majestic Brandenburg Gate. Moving down the street toward the historic Museum Island, we were waylaid by a massive construction project that has had Berliners grumbling for some time: a new subway line right in the city center. It has been nicknamed the “Kanzler-U-Bahn” (Chancellor’s Subway), in honor of Helmuth Kohl’s grand plans to make Berlin a proper European capital. You can only imagine the traffic snarls this expensive, ambitious project entails. Yet while we Americans twiddle our thumbs, talking endlessly about the pros and cons of new investments in infrastructure (and fighting about who will pay for them), Germany is boldly moving forward, as it has been for years. Here, serious debates about the tax burden—which is real and substantial—have not kept the federal government from acting as … well, as a government should.

Americans tend to take credit for shepherding the Federal Republic toward democracy after World War Two, and there is a grain of truth in this. But much of what works here so well today—including a real commitment to civic education and enviably high levels of electoral participation—is homegrown German. Those of us hoping to reinvigorate American democratic institutions should take a fresh look at Germany. Having mastered not only the National Socialist, but equally important, the Weimar past, these “ex-Nazis” have become the world’s leading democrats.