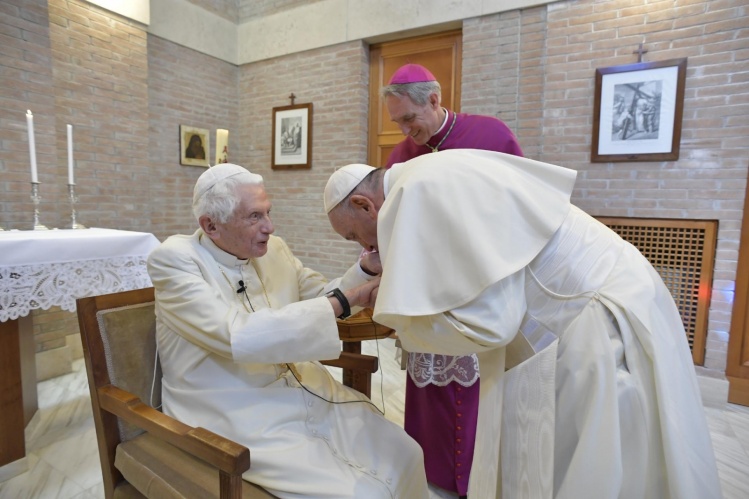 Transfers of power can be messy, maybe even more so when they play out over time. Pope Benedict XVI resigned more than three years ago and Francis is undeniably the only pope. Yet in some ways the transition is ongoing, and it continues to affect the Church.

That’s in part because the resignation itself isn’t really finished. With Benedict living his quasi-monastic retirement in the Vatican (though some may dream, his resignation cannot be rescinded), those who might be thought of as closest to the theological, spiritual, and cultural agenda of that pontificate still seem to be feeling its effects. It was clear back on that unforgettable February day in 2013 that the ones most shocked by the decision were the biggest fans of the pope-theologian Joseph Ratzinger. For some that shock manifested very early as opposition to Pope Francis (an opposition thus in place a full year before the first discussions that led to the Synods of October 2014 and 2015 and finally to the exhortation Amoris Laetitia). But for other prelates and ecclesiastical “creatures” of Benedict XVI, that initial shock yielded to the realization that Francis was the legitimate successor to Benedict XVI and that all was going according to God’s plans. This can be seen in certain cardinals, bishops, and lay intellectuals, among them Rocco Buttiglione, an Italian philosopher and  conservative Christian-Democratic politician who was extremely close to John Paul II and who wrote a very strong defense of Amoris Laetitia in L’Osservatore Romano last week. This is notable because it’s the first significant sign of the loyal realignment to the Church of Francis by many who were for a long time identified as “JP2 bishops” or “Ratzingerian.” This can’t be easily or cynically dismissed as someone just jumping ship or going whichever way the wind blows.

Another interesting element is that during these last three-and-a-half years it has become clear that the process of the reception of Francis’s pontificate is related to the process of the evaluation of the pontificate and pre-pontificate period of his predecessor—even while that predecessor is still alive. This process of embracing a new pope usually takes place after the burial of the predecessor. The current situation is obviously different. What’s interesting is that for some the emotional and intellectual attachment to Benedict XVI seems to be incompatible with the embrace of the new pope, while others seem to be more at ease with the situation.

There are clearly different receptions of Benedict XVI’s resignation. We can see a gap not only between those who “like” Pope Francis and those who “do not like” him, but also a gap between those who regarded Benedict XVI’s decision as a good one for the Church (that is, for the Church they had in mind) and others who basically have not accepted it yet. One could say that the two camps are almost identical (the pro-Francis and the pro-resignation on one side vs. the skeptics of Francis and those who feel let down by the resignation on the other side). But the picture is more complicated within the Catholic circles that feel attached to a Ratzingerian idea of Catholicism.

Two recent examples are an article published by Cardinal Walter Brandmüller and an interview of the personal secretary to Benedict, Monsignor Georg Gänswein (who is now giving interviews almost every week). Both are personally and theologically close to Ratzinger-Benedict XVI, but there are differences. Brandmüller is a German Church historian, former president of the Pontifical Committee for Historical Sciences (from 1998 to 2009—the period when members of the Roman Curia actively engaged against the historiography of Vatican II), and a scholar of conciliarism, that fifteenth-century period of the Church when the coexistence of pope and anti-pope gave rise to the power of the bishops and the councils. Brandmüller is not only a skeptic of a progressive interpretation of Vatican II, but also of the resignation of Benedict XVI. In this article by Sandro Magister, Brandmüller says the Church needs clearer norms and procedures to deal with the resignation of the pope and with the status of the former pope after the resignation. But he also says that the resignation of Benedict XVI is something that has not been good for the Church; it happened, but it would be much better if it did not happen again.

As for Gänswein, his interviews on and comments about the status of Benedict XVI since the resignation are too numerous to be listed, and it is not clear if he has changed his position after the backlash against his statements delivered in May about the “de facto enlarged [papal] ministry, with both an active and a contemplative member." He has not repeated his theory of the double papacy, but neither has he ceased in his attempts to undermine Pope Francis. Most recently, Msgr. Gänswein, who is still (unbelievably) the prefect of the papal household, told a German newspaper: “The certainty that the pope was considered a pillar of strength, the last anchor, has started to slip in fact. Whether this perception corresponds to reality and reproduces correctly the image of Pope Francis, or if this is more a media portrayal, I cannot judge. Uncertainties, confusions, and chaos, however, have grown” (my translation from German).

Brandmüller and Gänswein embody two different reactions to Benedict’s resignation. Brandmüller sees in the resignation the creation of a complicated and potentially dangerous situation, but he accepts the decision as a legitimate one that created a new situation in which there is a pope, Francis, and a former pope, Benedict XVI. The most interesting point Brandmüller makes is about the need to regulate “his possible social and media contacts, in such a way that his personal dignity be respected on the one hand while one the other every threat to Church unity be excluded.”

Msgr. Gänswein (whose official role in the Roman Curia should be “at the service of the Supreme Pontiff, both in the Apostolic Palace and when he travels in Rome or in Italy” – John Paul II, constitution Pastor Bonus, 1998, art. 181) took Benedict XVI’s decision in a way that has resulted in constant attempts to discredit the pontificate of Francis—a situation that is difficult to believe. One could almost think that when Cardinal Brandmüller was writing his suggestions, he had Gänswein’s constant media presence and attempts to interfere with the pontificate of Francis in mind.

This leads me to three considerations.