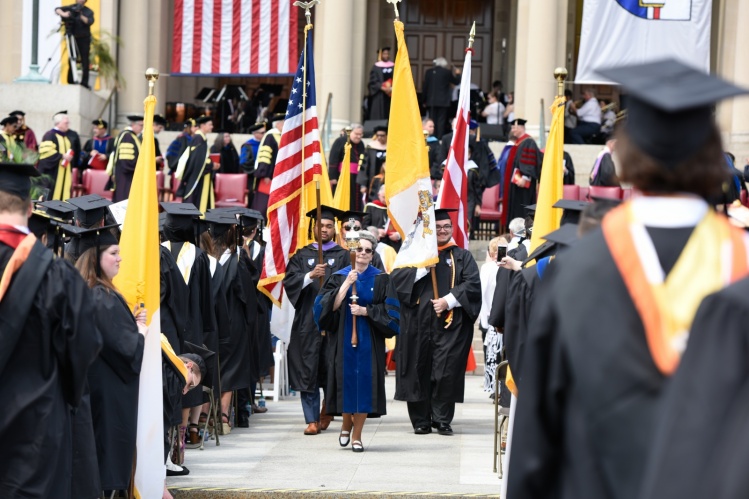 I don’t know when I first heard the term “authentic Catholics.” But I first began to think seriously about it last year, when a budget crisis at my workplace and alma mater, the Catholic University of America, propelled us into the news.

On the surface, the turmoil was primarily about financial decisions. But lurking beneath was a larger, ongoing battle about the university’s Catholic identity. Like many universities across the country—religious and secular—Catholic University, which is tuition-dependent, has had to compete for a shrinking population of price-conscious students. Some stakeholders have urged the university to try to appeal to a broader student base, while others have insisted that it should instead assert something called “authentic Catholicism,” even at the risk of losing students.

As I began to see the phrase “authentic Catholicism” appear more often in this debate, I found myself wondering what exactly it was supposed to mean. I don’t recall learning about it in religion class at the parochial school I attended, nor do I remember hearing it in any of my undergraduate theology courses. What I had always learned was that the very word “catholic”—which comes from the Greek words for “across the whole”—means “universal.” By definition, the Catholic Church is a universal church: one church, containing multitudes (even different, separate rites, such as the Eastern and Byzantine rites), but unified under the pope. If you are Catholic, the only way you can stop being Catholic is through conversion to another faith, or through excommunication.

The word “authentic,” then, seems a particularly problematic qualifier, as it implies that there is only one correct way to be Catholic, while simultaneously casting anyone who isn’t Catholic in that exact way as “inauthentic”: a false Catholic, a “Catholic in Name Only,” a “cafeteria” Catholic.

But if it is clear that the phrase is used to exclude certain Catholics, it is somewhat less clear whom exactly it includes. Those who deploy the term “authentic Catholics” seem to define themselves primarily by an absolute adherence to the magisterium of the Church, particularly regarding Catholic teachings on birth control, abortion, and homosexuality. Yet at the same time, they question Catholic authorities with whom they disagree. Some of these Catholics seem to feel alienated from many of the reforms of the Second Vatican Council, with a subset resenting the replacement of the Latin Tridentine Mass with the vernacular Mass. And although they feel a deep respect and nostalgia for the papacy of Benedict XVI, at the same time they regard the papacy of Francis with suspicion. Similarly, they seem to view some tenets of Catholic social teaching—such as the emphasis on immigration, the dignity of work, or the stewardship of the environment—as being far less important than Catholic teaching on the life of the unborn.

Perhaps most importantly, people who describe themselves as “authentically Catholic” also seem to see themselves as a beleaguered minority. And judging by the available numbers, they are right about that. We know that only 8 percent of American Catholics agree that contraception is morally wrong, and that only about a third of Catholics agree with the church’s teaching about homosexuality. Close to 70 percent of Catholics support civil marriage for gay couples. As for the traditional Latin Mass, while growing in popularity, it is offered in just 475 out of some 117,000 parishes in the United States (that’s one in every 250 parishes). So while Catholics who describe themselves as “authentic” seem convinced that they comprise the one, true church, then the pure church that they envision would indeed be a much smaller one. One might even refer to it as the “authentic option.”

Where are the Donatists, Jansenists, and Feeneyites today? Groups such as these die out, break off into separate sects, or reunite with the church that they left.
sharetweet

In thinking about what happens when a small group of purists decides to isolate itself from the majority—and what that might mean for Catholic educational institutions like my own—I have found myself reflecting on my current research project, an investigation of right-wing Mexican Catholics during the 1940s and ’50s. Studying the history of Catholic conflict in Mexico fascinates me for many reasons, but mostly because Mexico was—and still is—a majority Catholic country, which means that fights over the role of religion in Mexico are really disputes between Catholics and other Catholics.

There is one particular story from that period that I keep thinking about in relation to current debates over Catholic identity. In 1937, a man named Salvador Abascal, the scion of a prominent Catholic family and an admirer of the martyrs of the Cristero War, formed a group called the Unión Nacional Sinarquista (from sin anarquía, or “without anarchy”). The UNS was not a new political party; rather, it was a social movement that sought to unite Mexican Catholics who opposed the reforms of Mexico’s leftist revolutionary government under the presidency of Lázaro Cárdenas. The sinarquistas opposed all aspects of the revolutionary political platform, especially its continued attempts to crack down on the power and reach of the Catholic Church.

One of the sinarquistas’ most urgent concerns was the government-designed program of socialist education, a state-run program for both children and adults that sought to inculcate revolutionary cultural values while challenging organized religion. Specifically, socialist education aimed to indoctrinate Mexican citizens in the glorious achievements of the revolution. It also included sexual education for children, which was particularly appalling to the Catholic families of the UNS.

To combat the revolutionary government’s agenda, the sinarquistas developed a vision of their own for the country: an alternative form of Mexican nationalism that was Catholic and conservative. In this vision, the Catholic Church would take its rightful place at the helm of Mexican society. Below that would be a secular, conservative bureaucracy; then bosses, then workers, then the family—with the father at its head. It was fundamentally hierarchical and patriarchal, the opposite of the revolutionary nationalism that had captivated Diego Rivera, José Vasconcelos, and other leftist cultural figures in Mexico and around the world. And the sinarquistas’ worldview held mass appeal: at its peak, the UNS attracted some 500,000 members across Mexico who took to the streets in impressive rallies, singing the “Himno Sinarquista,” to protest the Cardenas government.

Flush with success, Abascal and the rest of the UNS leadership hatched an ambitious plan to separate themselves from the Mexican Revolution that they loathed, and bring about the pure Catholic society they hoped for. In 1942, they established several utopian Catholic communities in which they could live in agrarian harmony with other sinarquistas, and in which the patriarchal order, private property, and Catholic education would be sacrosanct. The largest of these communities, María Auxiliadora in Baja California, was founded and settled by Abascal himself. It attracted some four hundred colonists determined to live according to their Catholic ideals.

Life in the colonies consisted mostly of backbreaking labor, with intermittent breaks for prayer and study. Residents lived by an impressive set of rules for daily life, which governed everything from the (modest) clothes they wore to the phrases they used when greeting each other (the salutation was “Hail María Purísima!” and the response was “Conceived without sin”). For a while, this rigorous life seemed to work: the colonists labored cooperatively to farm the land, soliciting donations of cash and materials from supporters all over Mexico, as well as from Mexican migrant communities. People sent money and agricultural supplies; some even sold their personal valuables to support the colonies.

Yet the sinarquistas’ attempt to establish separatist Catholic communities began to fall apart after only a couple of years. The desert colonies were simply too far removed from society; there was never enough money; and not enough people wanted to live there. By 1944, their colonies had collapsed completely, and many of the families who had tried to settle them straggled home. Despite their strong faith, their isolation from Mexican society—a majority-Catholic society that the sinarquistas felt was insufficiently, perhaps even inauthentically Catholic—was simply unsustainable.

While there are important differences between Mexico’s sinarquistas and contemporary Catholics who insist on their own vision of “authenticity,” the episode nevertheless provides us with a vivid example of what can happen when purist Catholic movements seek to isolate themselves from the Catholic majority that they deem inauthentic. Over and over again, history shows us that movements such as these don’t survive within the church. Where are the Donatists, Jansenists, and Feeneyites today? Groups such as these die out, break off into separate sects, or reunite with the church that they left.

The fate of such movements does not mean that there should be no disagreements within Catholic society. These are natural. But the history of the sinarquistas provides an illustration of how isolation and mutual rejection can result in weakness and fragmentation, instead of strength through community and communion.

It can feel uncomfortable to be Catholic in America right now. We face enormous challenges from the clerical abuse crisis. We have deep disagreements with each other, made worse by vicious online commentary and our country’s deep political divides. Across the various Catholic categories—conservative Catholics, social-justice Catholics, Opus Dei Catholics, LGBT Catholics, Latino Catholics, Commonweal Catholics, Legatus Catholics (and the list goes on)—all of us contest what it means to properly practice our faith.

How does a Catholic university accommodate this multitudinous and fractured community? It isn’t easy. Indeed, many Catholic university administrations today face a difficult choice: appealing to the vast majority of Catholics (and the many non-Catholics who are attracted to the Catholic intellectual tradition and Catholic social teaching), or appeasing an increasingly vocal minority that insists that their way is the only way.

The Catholic University of America was established by the American bishops to serve all Catholics, not just a minority. As such, it belongs to all Catholics, and not to one particular denomination or subcategory. It should therefore continue to be a place where Catholics who disagree with each other can participate in vigorous and healthy debate, in “a spirit of encounter,” over political and social issues. It should also continue to be a place that encourages students to investigate different points of view, while at the same time ensuring that they fully understand the teachings of the Catholic Church as determined by the magisterium. It should continue to welcome the contributions of non-Catholics, and anyone who produces top-flight research that advances the intellectual tradition of the Catholic Church. It should promote a consistent ethic of life. And it should continue to be strong enough to honestly investigate the darker facets of Catholic history, including clerical sex abuse.

Indeed, any Catholic institution that aims to serve and educate all Catholics must avoid the temptation to try and create a utopia for the minority that considers itself “authentically Catholic.” Otherwise, it risks a fruitless desert exile of its own.

Julia G. Young is associate professor of History and director of Undergraduate Studies at The Catholic University of America.