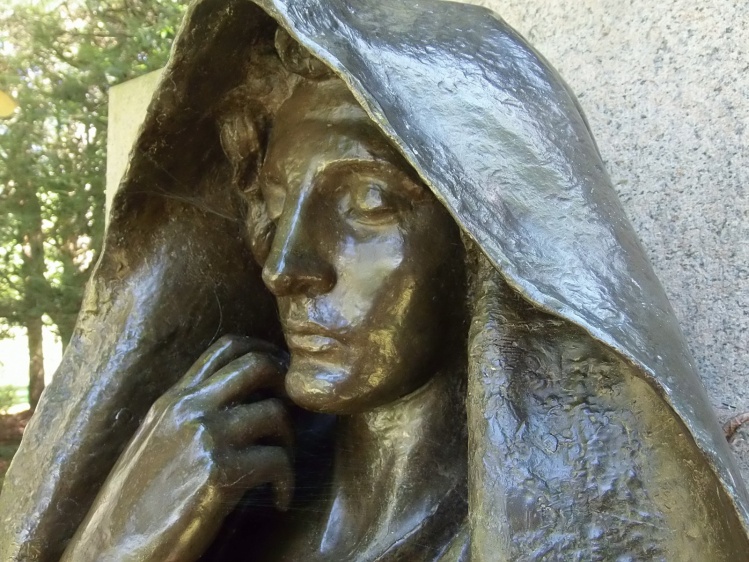 My wife and I were in Washington, D.C., the week after the thirty-five-day government shutdown ended. On Tuesday, when the Smithsonian museums reopened, we decided to go to the National Portrait Gallery. We had been there a few years ago, but it is an enormous and eclectic collection always worth revisiting.

We entered the building shortly after it opened at 11:30. Much to our surprise and pleasure, we were greeted by two of the museum’s administrators, a woman and a man. They introduced themselves, shook our hands, and exclaimed their gratitude for our visit and their relief and excitement that the shutdown had ended and the nation’s “cultural heritage” was once again available to the American people. I have rarely been greeted with such enthusiasm in any public setting, let alone a government facility. We were informed that there is a bill before Congress stipulating that national museums and parks remain open during any future federal government shutdown. We agreed that would be a good thing. I suggested that it would also be helpful if legislators were not paid during government shutdowns, a proposal our greeters felt compelled to be more circumspect about.

Our first destination was an exhibit titled “Eye to I: Self-Portraits from 1900 to Today,” a series of drawings, paintings, and photographs gleaned from the museum’s collections and evidently inspired by the contemporary craze for selfies. A number of the usual suspects were featured, including Andy Warhol, the sculptor Louise Nevelson, and the African-American painter Jacob Lawrence. Among the most striking were works by Thomas Hart Benton, the novelist Ralph Ellison, and the much-celebrated “realist” painter Edward Hopper. Benton’s Self-Portrait with Rita is a large, brightly colored canvas dominated by the chiseled torso and arms of the shirtless artist, a bronzed Adonis towering above his companion. Presumably there is an element of irony in the depiction—or is it just egotism? Hopper’s charcoal drawing shows him as a strikingly handsome and intense twenty-one-year-old, with a long jawline and a strong chin. Ellison’s pencil sketch is a small but remarkable likeness, which pays special attention to his intense gaze and full lips. Ellison, one of my favorite essayists, seems to have been as forthright in his drawings as he was on the page.

The shrouded, unspeaking men seated next to us at the station also appeared to be victims of some unfathomable calamity, one that rendered me silent.
sharetweet

Adjacent to the “Eye to I” exhibit is the portrait gallery of the American presidents. The big draw at the moment is the brightly colored portrait of President Barack Obama. Although the museum was sparsely attended the day we were there, a crowd gathered before Obama’s outsized portrait—it’s over seven feet tall—eager to take pictures of themselves alongside it.

When I first saw photos of Obama’s portrait I didn’t know quite what to make of its unusual backdrop of bright green foliage punctuated by a scattering of flowers, each different flower symbolizing some aspect of Obama’s history or heritage. In person, however, the portrait is vibrant and stunning, an explosion of concentrated and dramatic colors, pointedly including, of course, Obama’s own skin tones. Kehinde Wiley, the artist, has captured Obama’s penetrating gaze, obvious intelligence, and remarkable physical grace. Obama’s slender, long-fingered hands rest on his lap as he leans toward the viewer, ready to engage. There’s real presence here.

A little farther into the presidential gallery is Richard Nixon’s portrait. I was surprised to learn that Norman Rockwell had painted it. Like most people, Rockwell found Nixon to be “troublesomely elusive,” which is one way to describe the old crook. In an effort to flatter him, Rockwell gave Nixon an unexpectedly empathetic look, chin resting on his left hand, right arm thrown casually over a chair, a certain welcoming spark in his eyes. A more realistic depiction can be found in the tattoo of Nixon on Roger Stone’s back.

Our wanderings through the museum eventually brought us to Michelle Obama’s portrait in a gallery featuring portraits of contemporary cultural figures such as Beyoncé and Toni Morrison. Michelle’s portrait is also a large canvas, but the painting seemed rather flat and deliberately abstract, her skin grayish and her face almost unfamiliar. The focus is almost more on the dress than on the woman.

As we were winding our way out of the museum, we came upon a replica of Augustus Saint-Gaudens’s 1891 bronze sculpture, The Adams Memorial. Even if one has seen it only in photographs, it is difficult to get the image out of your head. The writer Henry Adams, a descendant of two American presidents, commissioned the memorial for the grave of his wife, who had committed suicide at the age of forty-two. Adams was so distraught that he never spoke of his wife again. He commissioned the work after traveling to Japan and encountering the Buddhist understanding of death and grief. The statue is meant “to ask a question, not to give an answer; and the man who answers will be damned to eternity like the men who answered the Sphinx,” Adams explained in a letter.

The statue, modeled on Buddhist devotional art, is of a seated and robed human figure. The figure’s eyes are closed, as if in a death mask, and the chin rests delicately on a clenched right hand. The figure’s androgynous features are almost obscured by the heavy shroud that covers its head and flows to the ground. The artist’s name for the piece was The Mystery of the Hereafter. The public came to refer to it simply as Grief. I have not visited the actual memorial in Washington’s Rock Creek Cemetery, but have never failed to be fascinated and moved when studying photographs of it. Encountering the statue—even a replica installed at the end of a museum corridor—was startling. It captures something fundamental about the mystery and anguish of human life and death, something nearly impossible to put into words.

That very human reality was brought home to me just as emphatically as my wife and I waited in D.C.’s Union Station for our train home. When we arrived, the waiting area was relatively empty. We found seats a few yards from two shrouded figures, homeless men wrapped from head to toe in filthy blankets, their faces hidden. Both were slouched in their chairs and asleep. The right foot of the man nearest to us was shoeless, swaddled in dirty bandages, his horrifically swollen toes exposed. The circumstances that led Adams’s wife to kill herself silenced him, making any words of solace or explanation impossible. The shrouded, unspeaking men seated next to us at the station also appeared to be victims of some unfathomable calamity, one that rendered me silent. They, too, are part of the nation’s often-disturbing cultural heritage.