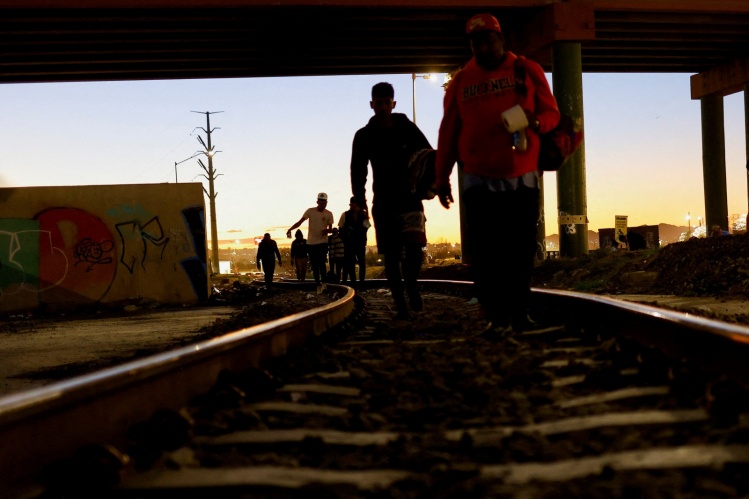 In 1999, a nine-year-old boy from La Herradura, El Salvador, crossed the border into the United States near Tucson, Arizona. His name was Javier Zamora, and the three-thousand-mile-long migration journey from his home village to the border took him about nine weeks. For seven of those weeks—forty-nine terrifying days—neither his parents in the United States nor his extended family in El Salvador knew where he was.

Solito: A Memoir is Zamora’s powerful and vivid recounting of the period between March 16, when he learned he would be leaving La Herradura to reunite with his parents in “La USA,” and June 11, when they picked him up on the morning after his arrival in Tucson. Now thirty-three years old, Zamora was able to recount his story only after extensive therapy, and after first publishing a 2017 poetry collection, Unaccompanied, filled with haunting poems about migration, the desert, El Salvador, loss, and longing.

I am a historian of Latin American migration who has spent years writing and thinking about the border. I am also the perennially anxious mother of three children, none of whom has ever disappeared for more than a few minutes. And so I read Solito with fascination, but also in a state of semi-panic, terrified for young Javier and always conscious of the agony his parents were feeling. As Zamora tells us in the final chapter, they “became insomniacs” as they waited in vain to hear from him during his journey.

Yet Solito is a book written entirely from the child’s—and not the parents’—perspective. Appropriately, the narrator does not preoccupy himself too much with the feelings of others or make broader arguments about the world at large. Zamora does very little to situate his story within the context of the mass emigration of Salvadorans in the wake of the U.S.-funded Salvadoran Civil War (1979–1992) and subsequent endemic violence and persistent poverty that have plagued the country. Nor does he overtly connect his plight to that of the thousands of other unaccompanied child migrants who have arrived in the United States from Central America in recent decades.

Instead, the book’s value for readers—beyond the vivid prose and photorealistic scenes of bus terminals, highways, deserts, and all the other landscapes of the migrant journey—is the way it allows us to step fully into the world and perspective of the child migrant. This is unique among the growing body of scholarly and trade books about Central American child migration. Works such as Sonia Nazario’s Enrique’s Journey: The Story of a Boy’s Dangerous Odyssey to Reunite with His Mother (2006) or Valeria Luiselli’s Tell Me How It Ends: An Essay in Forty Questions (2017) are narrated by journalists rather than child migrants themselves. (These books would be valuable companion texts for anyone wishing to better understand some of this migration’s root causes, namely endemic Central American poverty, violence stemming in large part from U.S.-funded civil wars, and an utterly broken U.S. immigration system.)

I read Solito with fascination, but also in a state of semi-panic, terrified for young Javier and always conscious of the agony his parents were feeling.
sharetweet

Still, Solito offers something different than these more investigative migrant narratives. At its core, it is a story about the fundamental emotions behind child migration: love and longing, loss and trauma, deep faith and challenges to that faith.

The memoir’s title resists direct translation into English: “Solito” can be translated simply as “alone” or “by himself,” but for Spanish speakers, it also conjures the image of a little boy going out into the world without his parents. Indeed, up until the very end of his journey, Zamora is without his parents, yet he is never actually alone.

After his mother and father had finally earned, saved, and sent the money necessary to bring him to the United States, his grandfather, Don Chepe, accompanied him on the first leg of his journey, from El Salvador to Guatemala. Once in Guatemala, the ordeal begins: a smuggler named Don Dago assembles a group of seven migrants who will make the journey together. After they leave for Mexico, however, Don Dago promptly disappears, leaving Javier in the charge of Marcelo, a man from La Herradura who turns out to be callous and uncaring and who will eventually abandon Javier and the rest of the group.

As the child of a loving family, Javier knows to look for love in the midst of this abandonment. He quickly bonds with three people in his group: Patricia (“a mom, short like my mom,” he writes, and with his mother’s name to boot), her young daughter Carla, and Chino, a skinny young single man who “looks kind, like a good person.” Over the course of the harrowing journey—which involves a nauseating and terrifying boat trip from Guatemala to Mexico; endless excruciating bus rides through Mexican cities, towns, and migrant checkpoints; and three searing attempts to traverse the desert from Sonora to Arizona—the four of them become a makeshift family.

After they arrive in Tucson, however, they must go in separate directions. Javier hasn’t seen them since. This loss seems to have been as traumatic as any of the agonies he experienced up to that point. As they say goodbye, he recounts,

The book’s value for readers—beyond the vivid prose and photorealistic scenes of bus terminals, highways, deserts, and all the other landscapes of the migrant journey—is the way it allows us to step fully into the world and perspective of the child migrant.
sharetweet

Solito is in large part a love letter to this found family. “My hope for this book is that somehow it will reunite me with Chino, Patricia, and Carla,” Zamora writes in the final chapter. “I want to thank them now, as an adult, for risking their lives for a nine-year-old they did not know.”

Zamora’s birth parents, by contrast, are defined more by their absence. The reader never actually meets them in the book, and we hear only briefly about his childhood with them in the final chapter and the acknowledgements. Yet clearly Javier loves them deeply as well and does not blame them for the decision to leave him in El Salvador, nor for what happens to him after he migrates.

Rather, throughout his book he recounts his childhood self’s visceral longing for them. He longs for his father—who had left for the United States when Javier was just shy of two years old, and who he barely remembered—but he yearns far more for his mother, who left when he was five. “I’ll come back, I promise,” he remembers her saying to him as she left early one morning, and he regrets not waking up as she goes. When he finds out his own trip to the United States is finally happening, he talks to his mother and father on the phone:

“¡Finally, Chepito!” She’s almost crying, I know she’s happy. I’m happy. Her voice like a wet good-night kiss to my forehead. Full, like a hug. She says more things. I can barely understand. Dad says something similar. His voice, ¡his voice! I will finally see it come out of his mouth. Touch his mustache. His hair.

Despite the fact that he is surrounded by love in El Salvador—he lives with his mother’s parents and her sister (Tía Mali), who raise him as their own—this powerful longing for his parents governs Javier’s life up to the point he leaves and throughout his journey. He watches American movies and plays with the American toys they send him (a Red Power Ranger, a glow-in-the-dark ThunderCats Lion-O sword—his mother works at Toys “R” Us). In order to make his parents proud, he throws himself into his studies, winning awards at his Catholic school. On some level, he lives this part of his childhood knowing that his future is in the United States and not El Salvador. Indeed, his descriptions of this longing can help readers understand why so many children like him willingly undertake the difficult journey to reunite with their parents.

After this reunion, however, he will experience a new kind of longing, absence, and loss: not only does he lose the constructed migrant family of Patricia, Carla, and Chino, but he will go nineteen years without seeing his homeland—or his beloved abuelita (grandmother). (His legal status, he explains in the epilogue, prevented him from visiting El Salvador until he was twenty-eight.)

His descriptions of this longing can help readers understand why so many children like him willingly undertake the difficult journey to reunite with their parents.
sharetweet

Love and longing, loss and trauma—all of these themes are gently wound through with another, more subtle one: faith. Javier comes from a country and a culture where many people have a deep daily relationship with God. Blessings and prayers are everywhere. “Que Dios te bendiga [May God bless you], here, everywhere, always. We’ll be waiting for you. Praying you’ll make it there safely,” his grandmother says as he leaves. People reflexively cross themselves, bless each other, ask for each other’s blessings, see signs, light votive candles, and remind themselves that nothing happens that is not the will of God. And then there is the cadejo: the dog-like spirit animal with glowing red eyes—a part of folk religion in El Salvador and Honduras—whose protection young Javier invokes throughout the trip. Throughout Solito, the adults in Javier’s life are full of faith. Zamora himself, however, emerges from the desert with his faith in his cadejo—and perhaps in God as well—challenged.

This shaken faith, this trauma that takes decades to unravel, this great grief-filled rending of children’s primal attachments to parents, grandparents, and constructed families: these are among the many harms of the great wave of Central American child migration to the southern border over the past thirty years. Not all of these child migrants will be as lucky as Zamora was and find a therapist who can help them process their trauma.

This is not to say that migration is wholly harmful; ultimately, the United States offered unprecedented economic and educational opportunities for Zamora, his parents, and countless migrants like him. Yet in the absence of both comprehensive immigration reform and political and economic stability in Central America, parents and children from the region will continue to take unfathomable risks to access those opportunities, risking separation, indefinite detention, and death. (Indeed, Zamora alludes to this by dedicating the book to “every immigrant who has crossed, who has tried to, who is crossing right now, and who will keep trying.”)

For those of us who have never had to experience the trauma and agony of family separation, Zamora’s narrative invites readers to look through the eyes and into the minds of children and parents who have. At the same time, Solito humanizes the abstract problems—poverty, violence, the broken U.S. immigration system—that compel parents and children to separate, and then cross countries and deserts in order to reunite once again. In this era of ongoing migration, detention, and death along the border, Solito is essential reading.

Julia G. Young is Associate Professor of History at the Catholic University of America.