The Real Achievement of the Synod
By The Editors
Synod on the Family
Pope Francis
U.S. Catholicism
Editorial
Laity
Theology
Vatican II 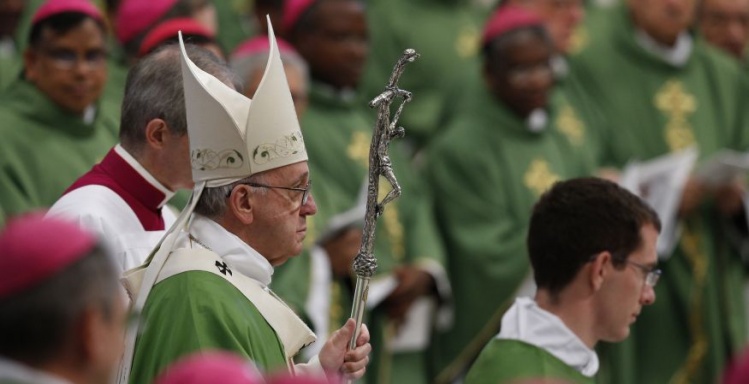 No knowledgeable observer expected the Synod on the Family to alter church teaching on the indissolubility of marriage or homosexuality. The synod’s final report, a consensus document replete with the requisite ambiguities, opens a path for divorced and remarried Catholics who have not received an annulment to be welcomed back into the church. Whether they may receive Communion, the synod suggested, is a decision that in certain circumstances could be made in consultation with their pastors. Sacramental marriage is not possible for homosexual people, the bishops reiterated, but they too have a secure place in the Catholic family. On these hot-button issues, the synod affirmed traditional Catholic doctrine but avoided condemning those whose lives do not conform to church teaching. Engagement rather than denunciation marked the synod’s formal pronouncements, a pastoral style deeply rooted in the documents of the Second Vatican Council, and profoundly embodied in everything Pope Francis does.

In taking up the synod’s recommendations, Francis is expected to issue an apostolic exhortation, or perhaps even an encyclical, setting forth the church’s pastoral response to the challenges facing the family today. Of course, he is free to change church discipline or practice, as he recently did in streamlining annulment procedures. Yet given his commitment to consultation and episcopal collegiality, one would expect Francis to make changes only when a strong consensus among the bishops can be achieved. That will take time. As Francis has often noted, the necessary foundations must be put in place if change is to be received as an authentic development in church teaching.

In that regard, the real achievement of the synod has been the reinvigoration of the synodal process itself, one in which bishops feel free to speak their minds, to disagree with one another, and even to explore the possibility that reform is essential to the church’s evangelical mission. In his address at the conclusion of the synod, Francis was both blunt and celebratory. The synod, he said, was about opening “closed hearts” and dispensing with the “superiority and superficiality” with which some approach “difficult cases and wounded families.” He dismissed “conspiracy theories” about the synod, and implored bishops to move beyond formulas “encrusted in a language which is archaic or simply incomprehensible.” In defending the family against “ideological and individualist assaults,” he emphasized that the church’s “first duty is not to hand down condemnations or anathemas, but to proclaim God’s mercy, to call to conversion, and to lead all men and women to salvation in the Lord.” Catholics must guard against the self-righteousness of the prodigal son’s jealous elder brother.

Francis’s critics complain that he has a weakness for ad hoc solutions and off-the-cuff remarks that sow “confusion.” Some prelates openly questioned the synod’s procedures and aims, warning that it would only exacerbate divisions within the church rather than confirm people in their faith. Progressives, it is speculated, will be disappointed and thereby disillusioned by a seeming lack of action. Conservatives, already deeply suspicious of this pope, will be further alienated in light of Francis’s insistence that the church cannot bury its head in the sand when dealing with changes in family formation and sexuality more broadly.

In ceremonies commemorating the fiftieth anniversary of the establishment of the synod process, Francis laid out a vision for the fulfillment of the promises of the Second Vatican Council that was anything but ad hoc or confusing. The Synod of Bishops, he noted, “was meant to keep alive the image of the Ecumenical Council and to reflect the conciliar spirit and method.” This effort at collegial governance “is one of the most precious legacies” of the council. “Synod” literally means walking together, the pope pointed out, and that process of discernment includes all the baptized. The laity are not just recipients of church teaching, but have an active role in safeguarding the faith. It is the faith of the whole people of God, the sensus fidelium, that protects the church from error, Francis reminded the bishops. “How would we ever be able to speak about the family without engaging families, listening to their joys and their hopes, their sorrows and their anguish?” the pope said. A “synodal church is a listening church.... It is a mutual listening in which everyone has something to learn.”

It was Gaudium et spes, Vatican II’s “Constitution on the Church in the World,” that opened this dialogue with both the world and the Catholic laity. The Synod on the Family has made clear that Francis is a reformer following both the spirit and the letter of that still fiercely contested council. The questions surrounding Humanae vitae, the celibate priesthood, and the role of women in the church are all areas where the church can learn from those in the trenches and in the pews. Future synods must include in a more systematic way the views of priests, women religious, theologians, and the laity. Listening, the pope reminds us, is an evangelical activity. Jesus was especially good at it.