As Italy Goes, So Goes the Church
By Robert Mickens
Pope Francis
Bishops
Letter from Rome 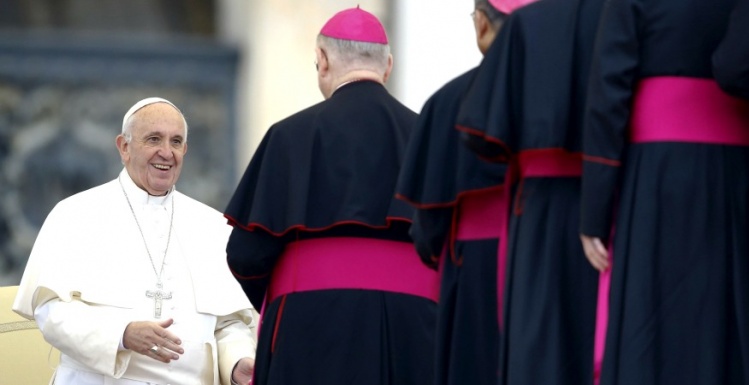 A pope’s most important title is Bishop of Rome. It is the basis for all his other designations listed in the Annuario Pontificio, such as Vicar of Jesus Christ, Supreme Pontiff of the Universal Church, and so forth.

But Pope Francis showed once again this week that one of the titles he is particularly serious about is “Primate of Italy.” On Tuesday he acted in this role to do nothing less than cause a bit of an ecclesiastical earthquake in the Bel Paese by making two surprising epsicopal appointments to major archdioceses that are normally headed by a cardinal.

The first tremors came last week when it was rumored that Francis had selected Fr. Corrado Lorefice, a parish priest from a small town in southeast Sicily, to be Archbishop of Palermo, some 170 miles to the north.

But just hours before the Vatican officially published the Sicilian appointment, the ground really began to shake. That’s when Italian media reported that the pope had picked Matteo Zuppi, a progressive-leaning auxiliary bishop of Rome, to be the next Archbishop of Bologna. Francis tapped the former pastor of the Sant’Egidio Community in Trastevere to replace the now-retired Cardinal Carlo Caffara, one of Italy’s leading conservative hierarchs.

It is no exaggeration to say that both appointments are of monumental proportions.

Archbishop-elect Corrado Lorefice goes to Sicily’s capital with the reputation of being a priest among his people and a strong critic of organized crime. He’s already entrusted his new ministry to the intercession of the martyr, Blessed Pino Puglisi, an anti-Mafia priest from Palermo who was killed by the mob in 1993.

"Don Corrado" is also the author of several books, including one that expresses esteem for Cardinal Giacomo Lercaro and Fr. Giuseppe Dossetti, two of the most important “progressive” figures at the Second Vatican Council.

But ironically, it’s Matteo Zuppi who has become the successor to Lercaro who was Archbishop of Bologna from 1952-1968. The bicycle-riding “Don Matteo” is a humble, prayerful, and much-loved priest—especially among the poor in Rome, whom he served as a friend and brother.

But that’s not the end of the story.

The appointment of the new archbishops to Palermo and Bologna are only part of a much bigger and more important picture. You can talk about living in a universal and globalized Church all you like, but the reality is that its Italian component is still the engine that drives the train. Pope Francis knows this. And that’s why he’s making exerted efforts to change the mentality and complexion of its hierarchy. Naturally, he’s run into opposition.

The first order of business, just months after he became pope, was to gently remind the Italian Episcopal Conference (CEI) they needed to resume work begun following the 1929 Lateran Pacts with the Italian State (and its 1985 revision) to reorganize and drastically reduce the country’s now 226 dioceses.

Boy, did that fall like seed on stony ground! The original pact had stipulated that there should be roughly one diocese for each of Italy’s 100 civil provinces, though the 1985 agreement altered that. Then, last year, Francis proposed that the bishops begin electing their episcopal conference president and secretary-general, posts that have always been papal appointments.

That time the seeds fell in the briars. The majority of bishops just did not want to take the responsibility of electing their conference leadership. But Francis pushed them, and from their original proposal that they would give him a list of fifteen or sixteen “candidates” to choose from, the pope got them to agree on electing a terna of names from which he would choose one of the three.

Francis had already responded to this incredible lack of responsible leadership several months earlier by bypassing the CEI’s preferred candidate for secretary-general and choosing Bishop Nunzio Galantino, a free-speaking, “smell-of-the-sheep” outsider from a small diocese in the poor region of Calabria. By the pope’s orders “Don Nunzio” has become the de facto head of the conference, pushing its actual president, the conservative Cardinal Angelo Bagnasco of Genoa, into the background.

Francis also upset the Italians last February when he gave the cardinal’s hat to two men who head minor dioceses and denied it to those in traditionally red-hatted places like Venice.

Why does this matter for the rest of the Church? It’s sort of like what they used to say about U.S. presidential elections, “As Ohio goes, so goes the nation.” But even more, it’s tied up with an old adage about candidates in papal elections, “If you want to know how he’ll govern the Church, look at how he’s been governing his diocese.”

We’re beyond that now and perhaps the real issue is to see that how Pope Francis is shaping the Church in Italy—especially through episcopal appointments—may be a good indication of how he hopes to shape it in other parts of the world, too. At least that’s what many are hoping.

Speaking of Church governance, the pope took an unusual step this week to tell mischief-makers in the Roman Curia he’s not going put up with any shenanigans or attempts to block his reforms.

In a letter to his Secretary of State, Cardinal Pietro Parolin, he made it clear that while changes to the Church’s central bureaucracy are being mapped out and slowly being implemented, the current laws and statues that regulate the Curia remain in full effect. Most important among them is the legislation on the hiring, firing, and transferral of personnel from one office to another.

Francis knows that one of the best ways to foul up a reform is by hiring new people and moving key mid-level officials into other offices. He told Cardinal Parolin to remind all heads of Vatican departments of this and to underline that his office, the Secretariat of State, must give final permission to anything in this regard.

Did the Pope have any particular department head in mind? Some think the letter is directed principally at Cardinal George Pell, the prefect of the Secretariat of the Economy.

Francis established this new office in February 2014 and the blunt-speaking, former archbishop of Sydney took up the reins with great determination. Known to be a bull that lugs his own china shop, Cardinal Pell started throwing around his weight (and the Holy See’s money) in order to implement financial reforms as fast as possible—perhaps too fast and lacking in proper etiquette.

A year later, February 2015, Pope Francis finally approved the statues for the Secretariat. They severely curtailed what Cardinal Pell evidently thought was near unbridled authority over all financial decisions.

“I answer only to the Pope,” the cardinal had been boasting since arriving in Rome. But the new statutes made it quite clear —he actually answers to the Council for the Economy, whose chairman is Cardinal Reinhard Marx of Munich. Yes, that’s the same Cardinal Marx that publicly criticized Pell during the recent Synod assembly for his irresponsible comments in a newspaper interview.